Following the release of his sexy singles “Souls” featuring M. Bronx and “Sins” via Spinnin’ Records, Borgeous announces his “Souls and Sins Tour” with Morgan Page and supporting act Delora. The tour launches at the top of 2016 in Atlanta, GA on January 15 and hits the west coast in Santa Ana, CA and east coast in Chicago, IL before hitting major cities in between the two coasts and wrapping in Denver, CO. While not listed as part of the tour, Borgeous will be stopping in Arizona for Crush Arizona 2016 so be sure to grab your tickets! Full tour itinerary is below.

Says Borgeous, “I’m really looking forward to heading out with Morgan Page. We’ve been friends for a while and I have a deep respect for him as a producer. I think our fans will enjoy a night out with the both of us.”

For the follow-up to his latest hit “Zero Gravity” featuring LIGHTS, Borgeous made available two brand-new songs: “Souls” and “Sins,” along with corresponding videos for each. “Souls” features vocals by M. Bronx and is a track made for lovers everywhere who’ve been mesmerized by someone who probably wasn’t the best person for them. “Sins”, offered by Borgeous as a free download, plays into the flipside with a teasing female vocal. Both tracks feature Borgeous’ unique move-your-body main floor production.

The sexy “Souls” video, which premiered on Playboy.com (11/5), features Borgeous as a casanova with many love interests, while the “Sins” video continues in look and theme but from the female point of view. Both videos were directed by famed rock photographer and video director Piper Ferguson, who has captured iconic images of such artists as Coldplay, Muse, The Strokes and Tom Petty, among others; her work has also appeared in the pages of MOJO, NME, ELLE, Rolling Stone and more. She has directed videos for Placebo and Neal Casal, to name a few. 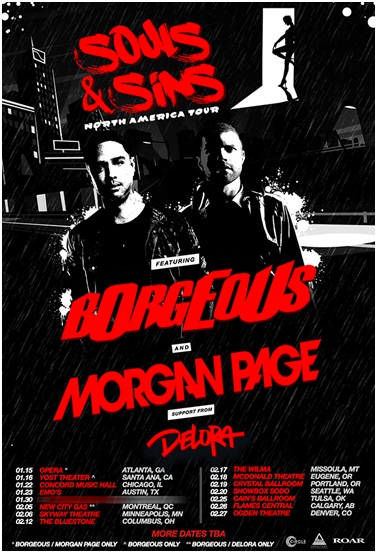