Hey, Phoenix! There is a HUGE Solstice Saturday upon us with RBDeep hosting The Martinez Brothers at Monarch Theatre this weekend. In light of this awesome show, our writer Anthony Scarpulla got “deep” with two of Arizona’s finest house heads, Pete Salaz and Sean Badger (aka Senbad). Dig in to discover their major influences, the origins of their weekly Solstice Saturday shows and how Kaskade’s manager once begged them to let him play locally for some street cred. 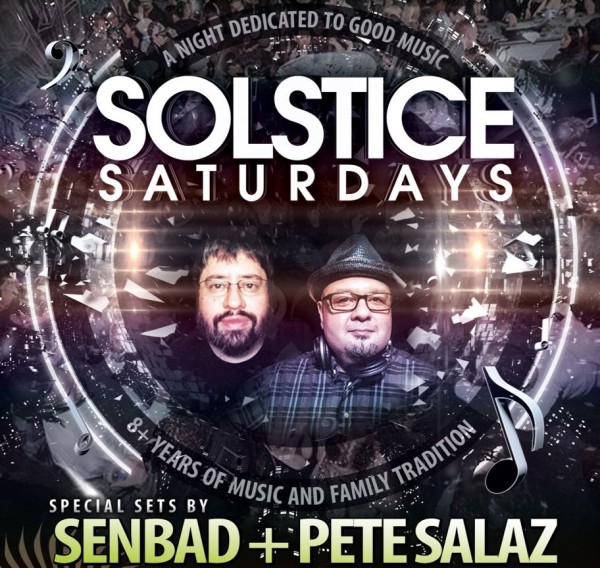 When & how did you guys meet?

Pete: I think in 1997 or 1998 at a RedMonkey event. Sean says he met me several years earlier at the infamous, Chupa! (underground spot from 92-97) but my memory fails me.  I had already been djn/promoting for a decade+ and he was looking to break into the Phx scene.

Sean: I use to see Pete at Chupa, but the first time I talked to him I was asking him about a song by Tantric called Love and Peace at Red Monkey. Turned out he was the record buyer for Swell Records and he ordered it for me…

When did you start Solstice Saturdays, & where?

Pete: Solstice started ‘bout 8.5 yrs ago at Bar Smith. Sean can tell you exact dates. Solstice is in the Phoenix deep house lineage of Chupa, RedMonkey, & Batucada! So really, it’s history dates back further than 8.5 yrs.

What are some of the most memorable Solstice events?

Pete: Each week brings its moments but the most memorable would have to be seeing some of the House Music legends play up close. Louie Vega, Kenny Dope Gonzales, David Morales, Joe Claussell, Osunlade, King Britt, Miguel Migs, Marques Wyatt, Doc Martin, etc.

Aside from that…(sappy alert), so many people have found their significant other on the rooftop and have either gone on to get married and/or have kids.  A lot of love has been found on that lil’ rooftop. I found my love there also!

Who are your biggest influences?

What are you most proud of in your career?

Pete: I’m happy that I have been accepted as long as I have. I’ve been spinning, promoting, and now club owning,  for 30+ yrs. It’s been a great ride! I can’t wait to see what the next 30+ bring.

Sean: Building a supportive community of true music heads. Giving opportunity for 100’s of DJs to display their sound. Mentoring several successful DJs. Oh… And the time that Kaskade’s manager begged me to let him play Batucada for a very small amount of money because he needed the street credibility that playing for Pete and I would bring to the table.

Who are your favorite local deejays?

Pete: That’s a tough one. The Valley of the Sun has some of the best djs I’ve heard anywhere in any genre. I have several.  Of course Sean Badger is one of them. It’s weird because, although we both play house music…we rarely play any of the same tracks. I wouldn’t play the stuff he plays but I find myself really enjoying the style he brings. And, he is technically a great dj.  Others I really dig in no particular order; KSupreme, Raul Riena, Michele Sparks, Flipstylz. For hip hop -> Robbie Rob, M2, Meanmugg, Mane One. On the future bass/edm tip -> Benny Beatnik

Why did you hook up with Relentless Beats?

Pete: It makes sense! They are great promoters. They bring killer events. They are pros! I’m co-owner of two venues that are devoted to quality electronic music and djs. I feel we are a great fit! I look forward to working with them a very long time!

Sean: Turner is a supreme music head. Love the passion he brings musically, mixed with a great business mind… we were destined to work together.

Where do you see the future of house, or electronic music as a whole, going?
Pete: There is an old adage, “the more things change, the more they stay the same.”

Who are some of your favorite modern day DJ’s and/or producers?
Pete: My modern day djs/producers are the same as I mentioned in the previous question…jus’ because they’ve been around a long ass time, doesn’t make ’em any less current for me. some of my fave producers are, Jamie Lewis, Dennis Ferrer, Sandy Rivera, Angel Moraes, MKTL…the list goes on.

Any tips for aspiring DJ’s out there on how to get their break into the scene?
Pete: With the current technology being what it is, ie. machines doing all the work except pressing play, I’m not sure I know the answer to this question.

I’m lucky (or sometimes unlucky) enough to be in a position where I get to have a big say in who spins at Solstice. Typically, for me if you wanna get in on any gigs that I have any say in….you have to show you are 100% into house music and it’s culture. You have to show me that you support the local scene. Being able to mix is jus’ a gimme. I’m assuming that if you approach me for a gig that you have already conquered being able to hold a mix and have had other gigs under your belt.

Be sure to catch Pete and Sean this Saturday night at the Martinez Brothers show, and every other Saturday for their Solstice Events at Bar Smith.