Arizona’s music scene, generally speaking, has seen waves of ambiguity mixed with constant comparisons to other regions of the United States who have seen a higher retention rate of home-bred local music acts that have not had the same success in the valley. The year of 2015 also leading up to present day 2016 has been a year of growth in the ebbs and flows of AZ’s local scene, specifically with new-found band Couples Fight. Headed by Travis James and Alaynha Gabrielle, this self-described Dancepunk, Electropop Punk duo have been listed by the Phoenix New Times as part of the “16 for 16,” or the roundup of artists who Phoenix should be looking to this upcoming year for groovy tunes. Most publications who have recently interviewed the duo have acknowledged their music as mixing relationship-orientated arguments against pumping beats; mixing the angst elements of punk, but putting an almost comical spin to the gritty yet nostalgic back-beats. In recent weeks, Couples Fight has had an unprecedented surge of novelty and success that has renewed enthusiasm into the local Arizona music scene. 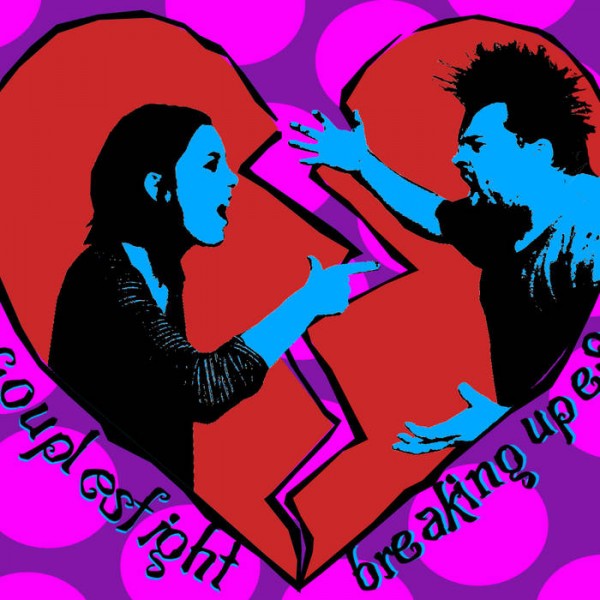 With only their very first public performance at the Broken Hearts Ball under their belt, this would be the ripe time to get to know the band, and also have a drink with one of my former high school alumni and see where life took her after our high school theatre days. Currently Travis, Alaynha, and their live guitarist Rick, recently concluded their first live performance on February 13th, with a lineup consisting of Jessie Williams, The Linecutters, and Sad Boy Trumpet Club. Titled, the Breaking Up EP on their Bandcamp page, their July 27, 2016 release was garnered with praise before they even had a chance to hock their music to a live audience. Riding on the success of their first live show, and also the positive commentary from the release of their EP, the adrenaline was high, the heat was flowing, and the party was on. As the band is still trying to make a mark, developing a unique sound had also been a theme in further developing their artistry.

Sitting on a spacious outdoor porch with Travis, Alaynha, Rick, their assorted housemates, and my four dollar bottle of wine I grabbed from a local Circle K, I poured myself an over-served portion, and thought I would start with –what I thought was – the more basic questions. Over time I engaged the band in questions about their favorite originals from other artists, their production and song-writing techniques, and getting to the nitty-gritty of what brand Couples Fight has to offer the Valley.

How did you guys come up with this idea? Why did you want to do this?

T: “I have already given this answer in an interview.”

Ah crap, I was trying to be the Barbara Walters of the situation —

T: “Alaynha, the man asked you a question, why are you doing this?”

A: (Proceeds to be silent)

T: “There is a question on the board, and it says, “Why are you doing this?”

As I proceeded to pour myself another glass of wine and spilled some on myself, this theme of odd-answer debauchery (from myself as well) would set the theme and pace for the interview. We truly never did gain insight into that question, so I moved on.

One of my favorite tracks on your EP [Breaking Up] was “No, Not Tonight.” I really enjoyed the twerkilicious beat that starts up around the 1 minute mark. Could you explain when it comes to writing and producing your songs, what do you start with?

A: “Kind of like this weird thing where we will go off and start with a very simple chord progression that sticks with us throughout the day, and we will think of random hooks and combine what we have. Sometimes I’ll just record my voice doing ‘BOOP BOOP!’ Travis does most of the production because I suck at Fruity Loops.”

So you guys use Fruity Loops in the production of your music?

T: “I know Fruity Loops is like the joke of the electronic music world, but I think it’s a really good joke. I also use it in conjunction with another ancient program, or used to be called Cool Edit Pro, which is now Adobe Edition. I’ve just been so used to these programs for like a billion years that I can’t abandon them. The musical process is very collaborative.”

Is the song writing process solely on you two? Or do you include Rick (the live guitarist), or other people?

Rick: “I actually learn the songs after write them, and hopefully in the future I’ll start writing.”

A: “That would be cool actually.”

Do you guys want to talk about some tracks that didn’t necessarily make it on the EP, but you felt really passionate about? Was there any tracks that you decided to not put on the EP?

T: “Well, we actually came up short on tracks and wrote a last minute one that one of the two of us would prefer to be thrown out, I think.”

RB: I really hope it’s not the one I told you I liked.

T: “I personally think that they are all smash hits.”

A: “I think there are winners on the EP, good ones, and ones that I would hope to never have to sing again.”

Couples Fight – Um, Who Was That

After pouring ourselves another good round of drinks, we all launched onto a controversial discussion of whether television needs actress Rashida Jones, or not. Once getting back on track, I decided to inquire about the artists they enjoy in their free time.

Has there been any songs by another artists that you’ve wanted to remix, or cover in a live and/or studio environment?

A: “Yeah, there’s this band called Masked Intruder, who have been around for about four to six years. They’re this punk band that will write about stalking a girl, but she doesn’t know they exist, which is weird. They have this song we’ve wanted to do. There’s also a lot of Meatloaf covers we’ve wanted to do! Maybe Meatloaf and Cher covers.”

T: “What about an Aqua cover?”

A: “There is a legitimately planned idea for us to do an Aqua cover.”

T: “We would also want to throw in that we want to do a David Bowie tribute.”

T: “We are going to do a ridiculous 8-bit version of “Under Pressure” but only at the end – the TAIL END of the concert. It will never be recorded in the studio.”

So, you just had your first live debut. What kind of crowd did you see at your first show?

T: “Bongo hippies. Some asshole thought it would be okay to play bongos during our set.”

T: “I spent a good minute and a half yelling about this douche.”

A: “There’s a video of us on Facebook playing the ‘No, Not Tonight’ song, and at the end you can literally see us, and see me scream ‘who’s fucking dog is that?”

T: “(shouts) GET YOUR FUCKING DOG OUT OF HERE!”

A: “We started yelling at this guy because his dog decided to walks on and over the stage.”

T: “We eventually do want to get into the rave scene, and see if a promoter will let us do a short set. I feel that a lot of people would find us funny and probably get us.”

It was an awesome time to again reconnect with my former classmate, Alaynha, and also meet some great new people like Travis, Rick, and their housemates. The night eventually drew to a close when I somehow awoke up on their outdoor couch at 4 am, quite unsure with how the night ended. All I can say is, thank you Couples Fight for your enthusiasm and passion for your art, and please click the bottom links to hear some good old-fashioned arguments over some sick FruityLoops beats.

Get the Breaking Up EP today!