For those of us who have been alive since the early 90s, or those of you who have proudly called yourself a “90s kid,” Adult Swim has impacted our late night viewing habits since its induction into the network lineup on September 2nd, 2001. For many of us who were children at the time, and under the rule of helicopter parents who dictated what we could watch on the boob tube, Adult Swim was our only outlet for shows that had swears like “hell,” “shit,” and naughty bits that gave suburban kids that rush any time you viewed something you knew one of your parents might cringe at. Luckily in the past few years, Adult Swim and many other television networks have been a part of a sort of renaissance that has given us high quality programming like Breaking Bad, The Sopranos, and even cartoons like Family Guy and South Park that are more concerned with sending a political message of the moment to its viewers and making them think, instead of the concerns of the past, who seek to fill a slot for thirty minutes with “brain junk food.”

Live at the Necropolis: Lord of Synth | Adult Swim

Of course many can argue that “brain junk food” still exists in television form, Adult Swim has grown up with us, and nothing gives us that warm feeling inside than their newest post of a video that went online on May 5th, 2016. What better way to tickle our nostalgia bone than a totally 80s-fied video that mocks not only the creators of the synth, but reminds us where EDM and the art of the synthesizer came from. With an idea of the budget being unreleased, Adult Swim managed to create a parody of the synthesizer and EDM by including every single 80s-cliché that we have experienced ever since the 90s could look back on the 80s.

Grainy footage, VHS tape-lines, and even that classic delay of footage that would show news anchors and judges awkwardly staring waiting for their feed to start. Only armed with network funding and the grace of having creators older than their targeted late-night teenage and young-adult audience, the actors poke fun at re-imagined names of Giorgio Moroder, Vangelis, and even a very androgynous impersonation of what seems to be Wendy Carlos, all participating in what is called “Live At The Necropolis, Lords Of Synth.” At this point in our pseudo-80s timeline, the early 80s were giving way way to the implementation of the synthesizer which then became a stable in music, due to its cheap investment of not needing to hire a full-piece orchestra, and the above names were some of music’s brightest composers who engineered the instrument in the late 70s to what we hear in music today. 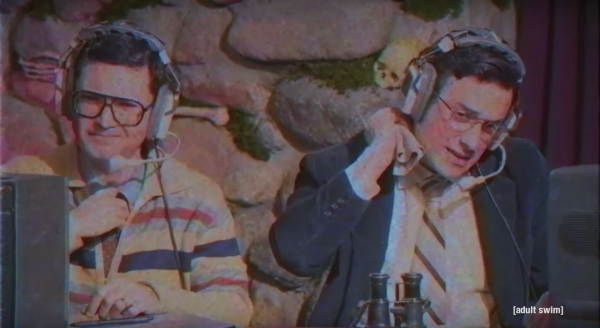 While not so much parodying the composers themselves, all of the composers are painted as overzealous beatniks who refuse to look at their work anything less than a gold-tinged masterpiece, along with small anecdotes about their personal life scattered throughout. In a small ten minute plot of monotonous banter between co-hosts of the impending doom of Halley’s Comet (with a surprise appearance of a portrayed Gerald Ford) the composers must put their musical differences aside to develop only the best early 80s symphony of synths. Behind the gloss of funny nostalgia, it is impossible to avoid the satire: the mention of a new “creative” drug as one of the composers drinks a vial, and is noted of having a “bleeding pink ear,” and even mentions of the classic red telephone and unknown celebrities that were once known and only remembered culturally for a short time.

This is no doubt in reference to the very sensitive fringe topic of drugs in EDM music (with it only being mentioned once), and a nod to how short our public’s memory is in the current swing of pop culture. This 80s video is not so much a nostalgic trip that triggers the words, “remember when,” but takes a jab at the absurdity of 80s culture while giving a nod to the birth of a genre that took twenty years in the making.

Definitely catch this video for some comedy that’s not only insightful, but laugh-at-loud on how spot on they are analyzing electronic music and the birth of the synth.