All Up In The EDMbiz-ness With Some of Our Industry’s Best: EDMbiz 2016 Announces Speakers

With today’s modern society, it is not unusual to have the first of something groundbreaking as we seem to be pushing limits and exceeding expectations every which way. It about looks like we have another one of those “firsts” for you today.

Thanks to EDMbiz Conference & Expo, a not so typical Keynote will be taking place on Tuesday, June 14th through Thursday, June 16th at Caesar’s Palace in Las Vegas. The 5th Annual Conference & Expo for EDMbiz will have dance music pioneer Moby, Insomniac’s Founder Pasquale Rotella, and Lefsetz Letter’s Bob Lefsetz taking charge. Mmm yes, I do not think there’s much to complain about there… At all. Oh, but believe me when I say there’s more – much, much more in store.

This world of ours in music has so much to offer, and EDMbiz is quick to showcase that quite clearly as this conference’s plans are showing it is going to be an exponentially unique experience of its own. This is no ordinary lecture hall conference, guys.

The focus? Two main stages to further push this year’s conference three cornerstones: experience, technology, and aspiration. As the beloved and well-known Founder and CEO of Insomniac so accurately put himself, “…This year’s conference will bring together top artists, executives, and experience-makers to share ideas and discuss innovative ways to continue the momentum and provide invaluable advice for newcomers on how to make their mark on the scene.” If you thought Moby, Rotella, and Lefsetz were the only names they were pulling for this conference, think again. 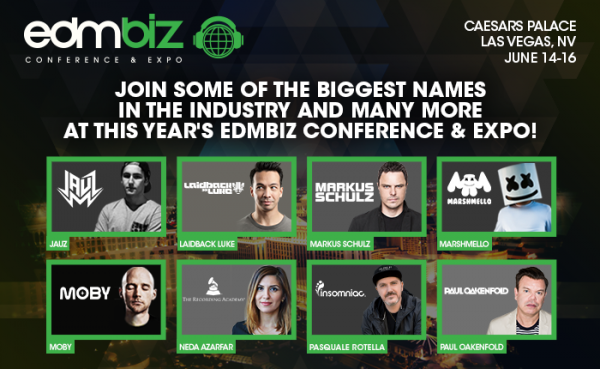 Other names to be included in this all-around experience of the industry are: Laidback Luke, Paul Oakenfold, Markus Schulz, breakout performers Jauz and Marshmello along with Junkie XL, the acclaimed composer of Batman v Superman: Dawn of Justice, Mad Max: Fury Road and Deadpool, BBC Radio 1 Producer and Director Danny Howard, the Vice President of Marketing Communications for The Recording Academy Neda Azarfar, and the Founder of URB Magazine and Head of Content for Goldenvoice, Raymond Leon Roker. The Music Director of KCRW, Jason Bentley, will return as host and moderator.

Mind blown? Overwhelmed? Good, because I’m not even done yet. Ready? Insomniac, in order to fully aim & succeed at their mission in creating the next great music festival, has partnered with CODEMKRS to pull off this event’s one-of-a-kind experience, a hackathon. CODEMKRS are the producers of the official hackathons for SXSW, Bonnaroo, and Outside Lands.

Yes, soak that all in.

This will be the initial phase and take place at Exchange LA. From there, teams will be selected, given access to Insomniac’s Dream Lab, and in the very, very phenomenal hands of CODEMKRS and Insomniac’s digital team to keep this beautiful process rolling furthermore for a four-week period. The Dream Lab Teams will be demoing their ideas at the EDMbiz Conference & Expo to a panel of industry leaders. The glory for the grand-prize winner will be nothing short of extraordinary, aka a backstage tour of EDC Las Vegas 2016, and the chance to go live with their technology sporting alongside the world’s best electronic artists. Well…

Clearly, nothing is ever enough nor will we ever settle. Hence the immensity of the power of music and the gravity of this industry.

To celebrate the formidable challenge that will be unfolding, the kick-off of this event will be the EDMbiz official opening night party held at Omnia and headlined by Afrojack, Tuesday, June 14th. EDMbiz will conclude this event with its closing night party at Marquee Nightclub featuring Galantis and Loco Dice, Thursday, June 16th.