So this weekend is probably one of the biggest weekends for summer shows so far, outside of maybe Fourth of July weekend. We’re touching all corners of the genre spectrum this weekend from some filthy dub to some trap, to some progressive house and everything in between! Noisia, Cookie Monsta, & DieselBoy are gonna kick it off, then we head to the pool for Henry Fong and Milo & Otis! After that we’re doing Trapfest and finally we end at the pool again on Sunday with Thomas Gold to wrap up the weekend. SO let’s go ahead and get going with what all this awesome artists have been up to lately!

Dutch electronic music trio, Noisia, have announced the release of their long awaited new album, Outer Edges on their own label, Vision. The 18 track album(18 TRACKS DID YOU SEE THAT?!?!) is their first in six years, and the band’s second in total. Noisia have transcended their genre and grown into a phenomenon in their own right. Drum & bass is at the core of their sound, but their visceral brand of electronic music has always ventured further and now they have something that sounds much darker than traditional DnB music. Watch the video for ‘Collider’ below and look for more news on the forthcoming album coming soon. Outer Edges is set to be released September 16 via Vision.

Dubstep has changed a lot since it first appeared on the scene in the UK, and even more still since it made its popular appearance as ‘brostep’ in the US around 2010-2011. One of the more noticeable changes has been the disappearance of the “wobble,” the wub wub. It was heavily prevalent in music by artists like Rusko, Emalkay, and even early Flux Pavilion, but it has largely dissipated in favor of heavier, more meaty synth structures. So the fact that Cookie Monsta has gone back and dedicated an entire EP specifically for the wub and trying to revive this older technique while combining the newer elements that have emerged is quiet an impressive feat.

Dieselboy, aka Damian Higgins, 28, dubbed “America’ finest” by The Risky, owner/editor of the British Drum ‘n’ Bass Arena Web site, has earned respect for fighting on the front lines of this American subcultural revolution since the early ‘90s, playing every major city and many in-between, and for his surgically precise and devastatingly dramatic mixing skills. Although he hasn’t been up to much lately besides touring and playing music he is still someone important to know as he has been a staple for the industry for nearly 20+ years. In 1998, Dieselboy became the first American nominated for a Global DJ Mix Award. Dieselboy shared the award for Best Drum ’n’ Bass DJ with legendary British DJ/producer LTJ Bukem. Ak1200, aka Dave Minner, the longest running jungle DJ/producer in the U.S., has called Dieselboy “an icon for American junglists. His talent and likeness have made him the most popular jungle DJ in America.”

As Henry Fong and Milo & Otis embark on their RIOT tour across the country, the two production outfits have teamed up on a new single inspired by their live show titled “Bring The Riot.” The new effort is a club ready trap banger with reggae influence and vocals from Doctor. “Bring The Riot” is packed with energetic beats and dancehall infused instrumentation, as Doctor’s reggae styled vocals hype up the intro. Moving past the hazy horn section and dub beats, Fong and Milo & Otis take over with floor shaking bass and wild synth sounds that dominate the drops. As musicians hailing from Orlando, Henry Fong and Milo & Otis have offered the new single up for charity, with all proceeds generated from the track going to OneOrlando to support families of the victims of the Pulse shootings last month.

It’s the fourth year celebration of Trapfest and we’ve got the best line up for all the trap heads out there! GTA is headlining the show followed by the incredibly wonky sounding Troyboi, and of course we can’t forget about Stooki Sound or Oshi either.

GTA‘s debut studio album has been hotly anticipated in the dance music scene, and the duo have finally unveiled the first taste of the upcoming work. A collaboration with Australian producer Wax Motif on “Get It All” serves as our introduction to the forthcoming LP, and a music video for the single hit the internet this week has already been released as well. 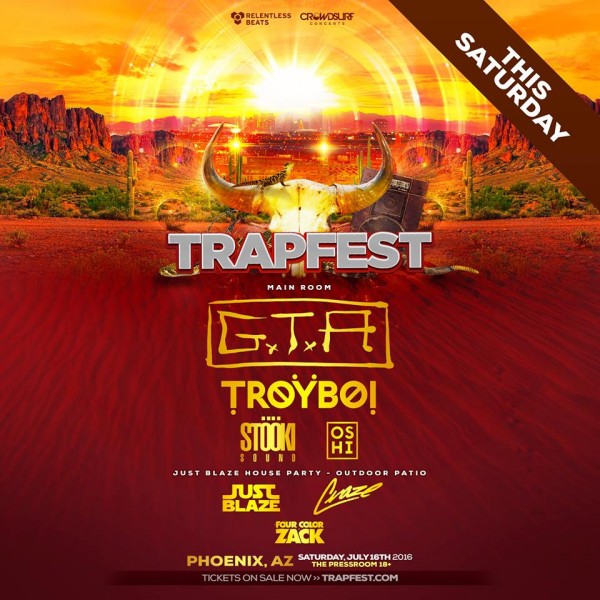 Troyboi has been releasing music like a god damn mad man honestly. He has even dipped into a little bit of deep house music and straying away from his typical 140-160 bpm wonky bangers. In the last 3 months he has 6 songs that have been released on soundcloud and there are some others that have gotten released on other platforms. I collected a pile of them and put them into a soundcloud player for you guys to listen to what he has been working on and quoted as “my style”.

In addition, don’t miss out on the Just Blaze House Party stage on the patio of The Pressroom where you can catch old school trap and hip-hop hits from artists like Just Blaze, Craze, and Four Color Zack!

The changing pace at which Thomas Gold’s year has taken shape has been literally breathtaking for the Berlin based artist. Not surprising then that Thomas was quickly snapped up by mammoth recording imprint Toolroom Records, who invited him to join their thoroughbred team of talent; as both a recording artist and resident DJ for their infamous ‘Toolroom Knights’ events alongside the likes of Fedde Le Grand and Mark Knight. This strong start hasn’t gone unnoticed on the dancefloor either. 24 months on from breaking through into the international spotlight Thomas has nestled himself into the CD wallets of such luminaries as Axwell, Sebastian Ingrosso, Tiësto, David Guetta, Chuckie, John Dahlbäck and Sander Van Doorn, whilst discovering equal support at club level by regularly chalking headlining slots at prestigious venues like Pacha, Privilege and Ministry of Sound.

As per usual, ticket links should be in the title of each shows name so go ahead and click there and you should be good to go! Other than that have a fun and safe weekend everybody and I’ll see you on the dance floor!