Everyone is waiting for another celeb to get involved keep the #KimExposedTaylorParty alive, but while we all wait in suspense, here’s what has been said lately: 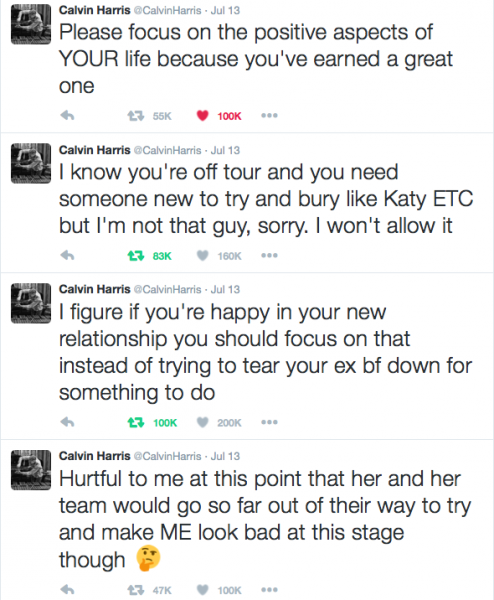 Calvin has yet to comment on Taylor’s unfortunate run in with Kimye, but he didn’t hesitate to go on a Twitter rant about his ex-girlfriend and co-writer of “This Is What We Came For” Taylor Swift a few days prior. The two suddenly split in June, and it seemed to be over an interview where Harris admits he couldn’t see himself working with girlfriend Swift in the future. Taylor’s contribution to the Harris x Rihanna hit was kept a secret until she and “her people” blasted her involvement with the song publicly, causing Calvin to feel victimized. Kudos to Calvin for the comebacks! 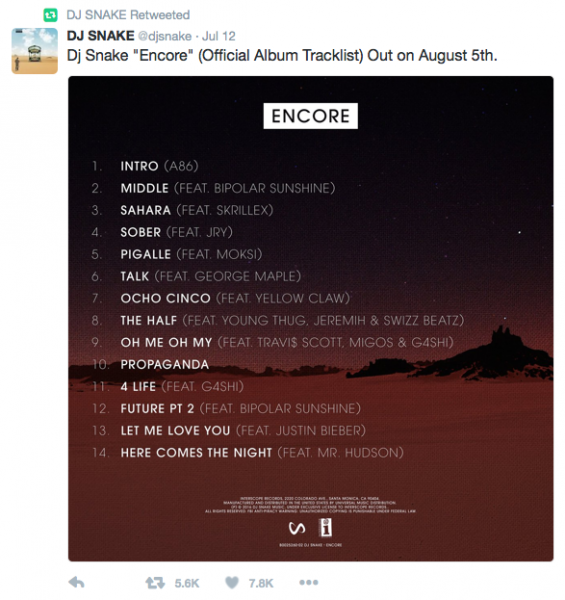 “Encore” is set to release on August 5, but the internet just couldn’t wait to hear DJ Snake’s collab with Justin Bieber entitled “Let Me Love You.” The Bieb’s collab with Major Lazer, “Cold Water” was also leaked before it’s intended drop. No word when the official song will be released on purpose, but check out the sneak peak here.

Never take tweets like this lightly. Producers have the potential for an unbelievably fast turn around, with completely unexpected collaborations. Responses ranged from Kendrick Lamar to Lil Dicky to ASAP Ferg. Maybe 4B is fishing for remix ideas? Or maybe he’s already making a few phone calls.

Prediction: Bro Safari will drop three new songs during his sets at Moonshine or Lollapalooza… he’s literally telling the entire Twitterverse. What better motivation to get on his grind than thousands of fans ready to rage to new bangers?

Producers and entrepreneurs. If Astromar’s DJ career doesn’t work out, we know where to find him. Do I sense a new Fanta commercial?