This weekend, many festival goers from the midwest will be packing up their camping gear and heading to Wisconsin’s Summer Set Music & Camping Festival.

Summer Set has one of the most diverse lineups out there. From some of the largest names in electronic music, Bassnectar, Skrillex, and Alison Wonderland, to hip hop artists such as Chance the Rapper and Logic. Summer Set is known for their variety in musical talent. 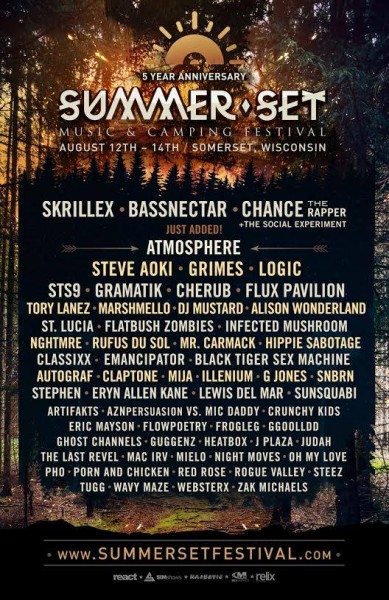 The main portion of the festival may end at midnight, but there are after parties held at the Grove Stage until 2:30am. Plus, the campsites go wild once the main attractions have ended. This festival doesn’t sleep. Hop around from campsite to campsite and introduce yourself to some new people, because the midwestern hospitality is the best around.

This Wisconsin-based festival has faced controversy for it’s tight security. Whether the hefty amount of police are there for your safety or to breathe down your neck at all times really has gotten people talking about whether or not they are turned off from the event. One could say they are there to make sure every person is protected and has a safe and successful time. On the other hand, the term “Summer Set Up” has been coined because they may have other intentions such as revenue raising for St. Croix County.

Either way, Summer Set’s lineup can’t be beat. It brings in some of the most down to earth people in the midwest for three days in the northern Wisconsin lush.