It’s hard to believe that Halloween is already next month; 2016 has just been flying by and festival season is in full swing! With all the different festivals that have popped up within the past five years, your options are anything but limited when it comes to celebrating Halloween. Insomniac Events will be expanding its newest spooky affair BOO! to touch down at three different cities this year, including right here in sunny Arizona, but will also be bringing back it’s original Halloween celebration: ESCAPE to take place October 28th-29th. 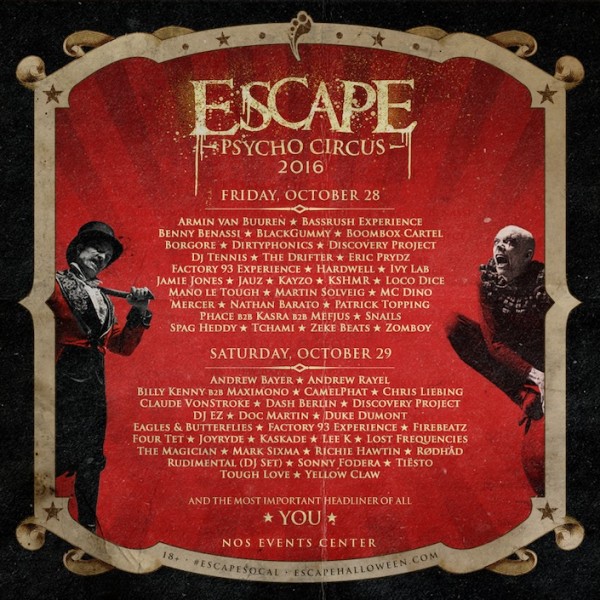 Insomniac has put together a star-studded lineup for this haunted gathering at NOS Events Center  on October 28th-29th in San Bernardino, California. Headliners already were aware of the monstrous talent joining them at Escape Psycho Circus on the ghoulish weekend of the year, but now Insomniac has released the lineup by day for proper Halloween weekend planning. In addition, single day passes are now also available for those who aren’t able to come out for the entire weekend; now you can choose which day you want to attend based on the artists playing. Single-day GA and VIP tickets, as well as two-day GA and VIP passes, are on sale now.

Day 1 features the Bassrush Experience bringing all the spine-tingling beats for the bassheads and headbangers. Both days, however, Insomniac will bring their own underground brand Factory 93, boasting an entirely curated stage of the underground sound. This Factory 93 Experience will bring the old-school dark warehouse vibes, while bumping only the best in house and techno all weekend long.