If you’re looking for a festival where everyone embraces the whole “let’s not shower for three days” and “let’s all sweat on each other while we go bananas to this set” mentality… this is NOT for you.

If you’re after something even more sophisticated- or even just with an accessible shower- Kaaboo Del Mar Festival has your wristband for next weekend ready to go.

In its second go-around, this weekend “mixperience” is three days, seven stages, over 100 musical performers, and over 1,000 food and drink options, in addition to a plentiful list of noteworthy and eclectic aspects (categorized below) all within the confines of Del Mar Racetrack and Fairgrounds.

Perhaps we can expect a visit from Halsey for another intimate performance of ‘Closer?’ Maybe Blink-182 will join Aoki on stage to perform “Bored to Death” live? Even if I just jinxed it and any chances of these live collabs are ruined, don’t dismiss DJ Snoopadelic…

Never heard of him? Yes you have. IT”S SNOOP DOGG. IN DJ FORM. Although not too well-known in the DJ world, the legendary hip-hop artist had a residency at TAO nightclub performing as DJ Snoopadelic and hosting his Roaring 20s themed parties. He’s been performing as his alter ego for about two years, although his music is still predominately hip-hop focused. For a preview of what to expect, click here.

Strict-EDM enthusiasts- don’t be discouraged by the seemingly small electronic presence at the festival. If you’re not too keen on catching Fall Out Boy, Ludacris, Aerosmith or Jack Johnson, there is LITERALLY a million other ways keep busy at Kaaboo. 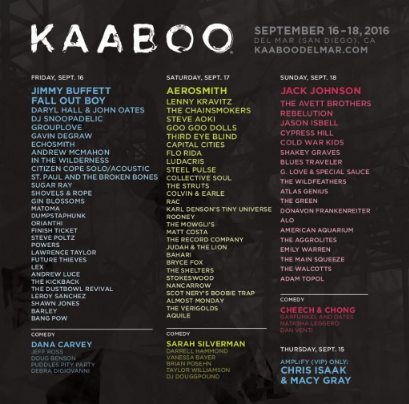 With hotel reservations instead of camping passes, Kaaboo features something unique to other festivals; an indoor, air-conditioned comedy club with comedians like Natasha Leggero, Sarah Silverman and Cheech and Chong on the roster.

There’s also a roster of chefs, bakers, wineries and breweries that will set up shop for festival goers to indulge in international and upscale cuisine between sets, or perhaps on their way from the comedy club to the art exhibits.

Yep, art exhibits. Some pieces are shipped internationally just for the Kaaboo spotlight, and others are created specifically on site to premiere at the festival.

This ultramodern event’s highlight is arguably the music, but there’s so many attractions to indulge in, it would probably be worth the trip even without the supreme lineup. But, watching the Chainsmokers and Steve Aoki perform all the new tracks they’ve put out recently wouldn’t be the worst thing in the world.