Ravers ‘Spooked’ by HARD Day of the Dead Cancellation

The HARD phenomenon is beginning to globally expand, with HARD Australia premiering in December, but there’s been difficulty on the production company’s home front of Los Angeles. This year is the first since 2008 that HARD Day of the Dead, a Halloween-centric festival hosted by HARD, a Live Nation subsidiary, will not happen.

There’s been multiple rumors as to why Gary Richards, the HARD head honcho and alter ego of Destructo, cancelled the event. Technically, the festival was never officially announced this year, but was highly anticipated by the rave community.

A probable cause of Richards’ hesitation is the unfortunate and highly publicized deaths of three women at HARD summer just two months ago. According to the LA Times, there have been 25 confirmed drug-related deaths since 2006 nationwide at raves organized by Los Angeles based companies like HARD, with twelve deaths in Southern California alone. There have been no comments from any HARD representatives on this subject, but Kaskade threw his two cents in with a statement on his website:

“This is a world-wide problem, something that is not even close to being unique to dance music. Part of the problem is people trying to simple-size it. Raves = drugs. So close them down… There are better answers than regurgitating the same alarmist solutions that have never worked, which will NEVER work. Try this on: education, harm reduction and legalization.”

In multiple interviews and social media posts, HARD reps have attributed the cancellation to logistical difficulties, stating that nailing down a venue and hosting HARD Summer and HARD Day of the Dead so close together in two new venues is too stressful on the company.

Last year, the Halloween rave was held at the Fairplex in Pomona, where two deaths caused Live Nation to be sued by both families. The Fairplex has since decided not to host any raves this year. In a Instagram direct message from Destructo himself, a fan received this response to the ambiguous status of the popular festival. 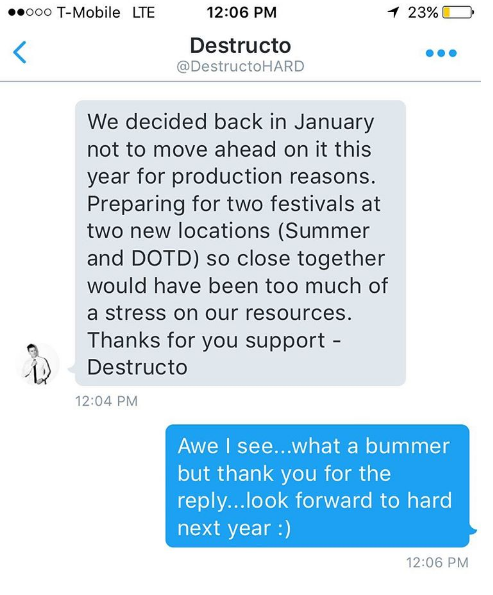 The Destructo-designed festival’s headliners previously included big names like Skrillex, Deadmau5, Tommy Trash, Pete Tong, Alison Wonderland, marshmello and Borgore. Although the event’s popularity has increased with time, so have the drug-related detriments.

Whether it be because of venue issues, safety reasons, or a combination of the two, the HARD Day of the Dead, annually a mecca for electronic dance fans to celebrate Halloween, will not see its eighth year in 2016. It’s unclear if it will continue it’s legacy in 2017 or become a memory, but we do know that ESCAPE Halloween will be very crowded this year.