Dirty Disco has been a significant gathering of the Phoenix electronic community for eight years running. In 2010, local promoter Sam Groove had a vision in mind; with a lack of focus on the financial aspects, gather all the party people of Phoenix for a night of dancing in the desert. That year, the event had two separate nights with the initial in February and another to follow in May.

On the first day of the event, Arizona experienced one of its heaviest rain storms. With flooding in mind, event attendees were almost discouraged from coming out, but they decided to roll with it. As soon as people started to arrive the rain cleared up and it was time to get the night going.

“Calling the party dirty was an understatement. It was a muddy disco and everyone was covered, but it actually made the party that much more fun.” 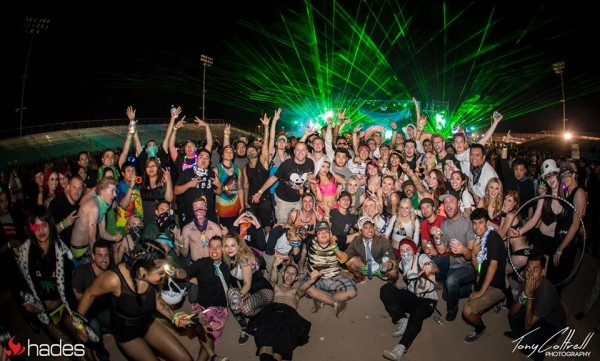 When the second party of the year rolled around in May the weather was crisp and clear enough for everyone to make it out. Well over a thousand people showed up, parked their cars a mile up the road, and partied into the morning. The event was huge, and Sam knew it was time to make this gathering official, so him and his crew partnered up with Hades Entertainment to coin Dirty Disco as a annual event.

“With the full support and expertise of the Hades team over the years, they made a huge impact by helping evolve Dirty Disco from a local, renegade style desert rave, into a festival style event with top notch production and international performing artists. Something I never imagined when I first started the party.”

What started as a party in the middle of the desert has turned into a well recognized mega-bash. With that, the event now pulls international artists to perform. In fact, this year’s lineup has bass fans anxious. Their patience is being tested as they wait for May 20th to approach. With Dubloadz, Jvst Say Yes, Squnto, Matt Dunn, Berg, and more joining us for the festivities it’s going to be bigger and better than ever.

One dirty stage. One dirty vibe. One unforgettable night.

“Our journey with this event brand over the years encompasses many aspects of how the scene used to be, how it has come to be, what it is today, and where it will go in the future.”

Dirty Disco gives attendees a very distinct experience as it is a mesh between rave and full-blown festival. When the event started one never would have thought it would get this big, so get a taste of how it operates by joining us in the desert this May. Come witness the crisp lasers, immense stage set up, and roaring sound system.

Purchase your tickets before prices go up, join the event page, and #letsgetdirty.