This past weekend was one to remember. With nearly 50 acts over two days, Phoenix Lights abducted the hearts and souls of music lovers of Arizona and beyond.

Fans waited anxiously for the reveal of a brand new venue that included a beautiful grassy area surrounding the main stage, ample room for all attendees to dance, and some out-of-this-world decorations. Careful near the merch-booth! You could definitely get beamed up by the space-shuttle that “crashed” at Phoenix Lights. Rolling clouds of smoke flowed from the ship and the aliens who invaded left intergalactic sights everywhere. Puffy frills and tentacles provided a backdrop for some far out photo-ops. 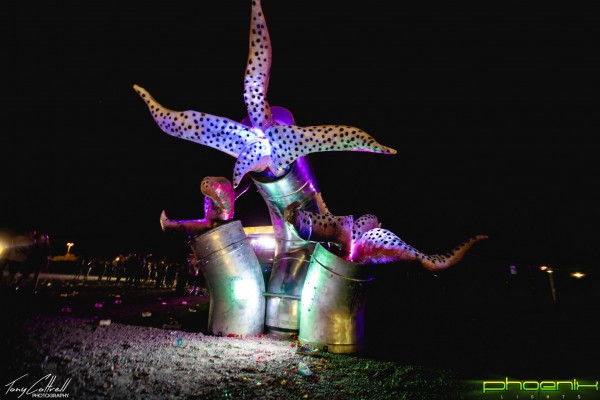 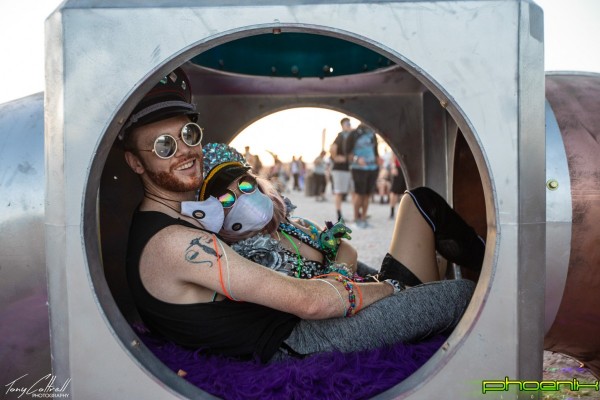 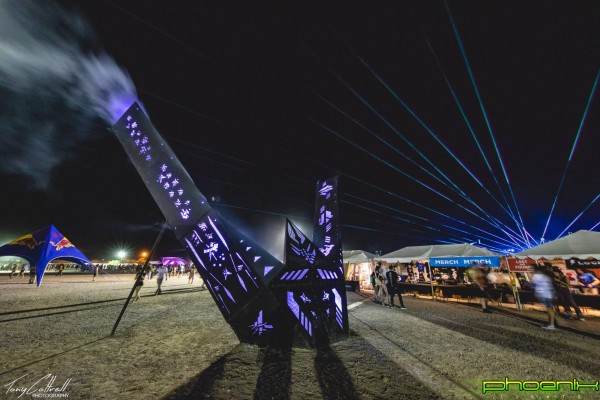 Phoenix Lights had a marvelous 4 stages this year; Mothership, Invasion, The Colony, and The Fallout. Saturday, Arizona local Gerry Gonza, started the day off at the Colony stage. Gerry actually sang on top of his DJ set, an added bonus to an extremely fun set. After Gerry, GTA took the Colony stage for the first of three–yes, three–sets. It was a “purple” techno set, and it was straight fire so early into the festival. In other areas around the park, MELVV took over the Mothership as Um.. played Invasion. 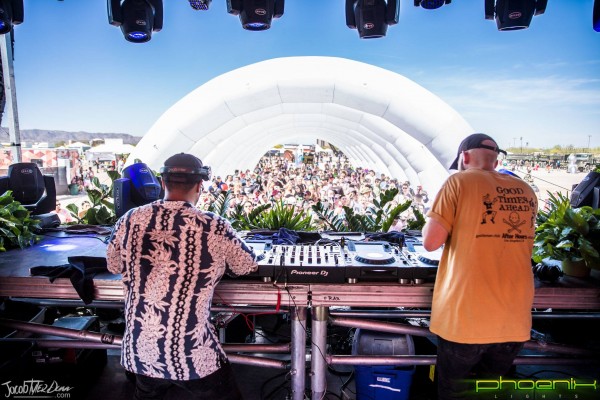 One of the most energetic sets of the weekend was Fisher. Completely slaying The Colony stage with hits like “Ya Kidding” and his newest “Crowd Control,” he reeled in (get it? Fisher?) everyone watching him. With humorous visuals that displayed “that bassline is raw” (featuring Gordon Ramsey) it’s clear why Fisher is so fun to see live. On the other end of the park, artists like Goldfish and JOYRYDE were each carving their own Phoenix Lights legacy. 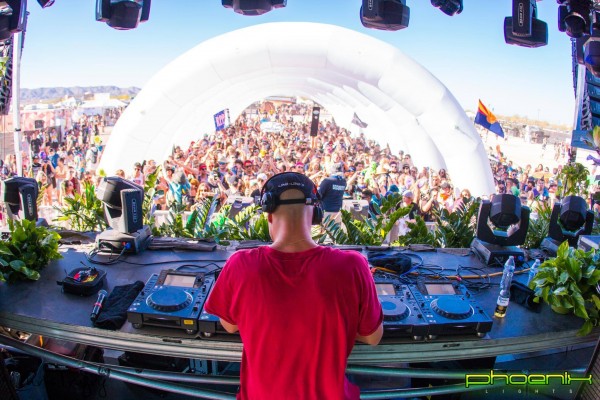 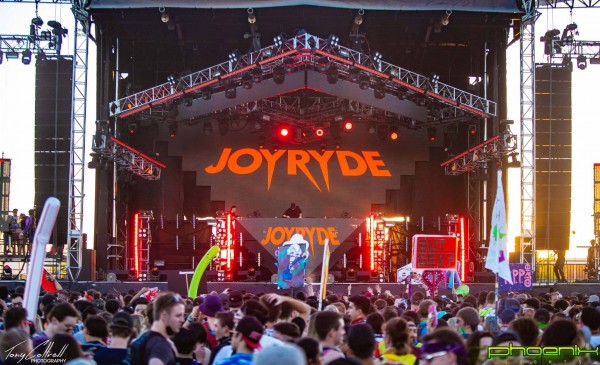 Later in the night, Minnesota took to the Invasion stage and GTA performed their second “yellow” set that radiated moombah/big room vibes. This set drew in a huge crowd, and it was definitely with good reason. After GTA’s set was the infamous Jeff, aka Seven Lions. This set was intense, from head-banging to diving straight into the feels, it was an unforgettable set.

Gucci Mane, Justin Martin, and Beats Antique were pre-closers of the night, but each artist brought their all. Closing the night out was Martin Garrix, Green Velvet, and Gramatik who all had energatic crowds dancing feverishly into the final minutes of the night. Whichever stage you were at, the first day of Phoenix Lights ended beautifully with fireworks.. but, the party was not over for everyone! 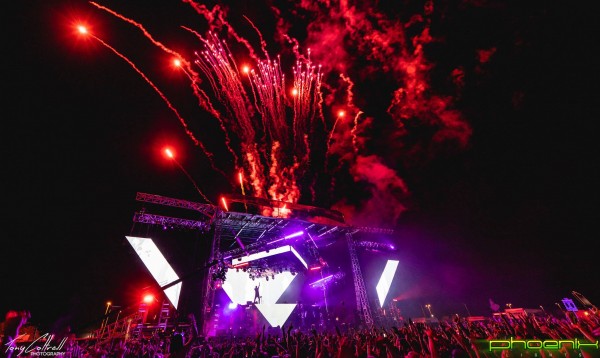 As for myself, I was on my way to the Brownies & Lemonade afterparty. Artists included were Wax Motif, Wuki, GTA, Justin Martin, Dosem, and special surprise guest, Green Velvet. GTA played their third and final set, a “red” set full of trap, rap, and bass. Justin Martin and Green Velvet went B2B for what felt like hours but we weren’t complaining. Being up close and personal with the artists and seeing them interact was one of the best parts of the night. Oh yeah, did I mention they also served brownies to the crowd? The entire night was filled with great vibes that led us into day two. 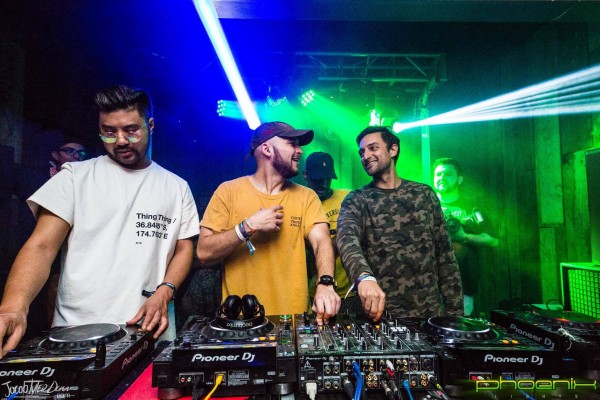 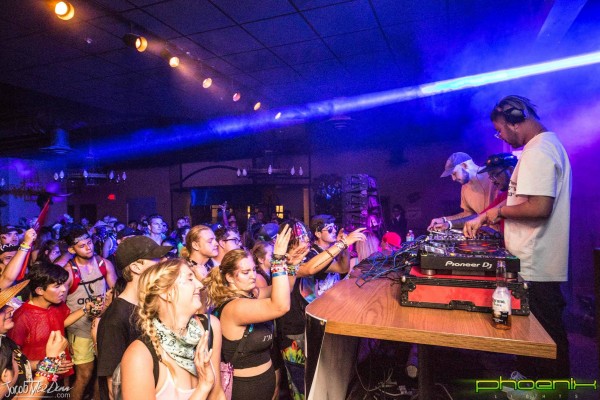 Carrying the excitement from Saturday into Sunday, the day started off with local talents Hijakk, Mike Dao, and Sean Watson. The bass started early with KUURO taking the Mothership around one. Kasbo, a fantastic DJ from Sweden, was one of the most notable acts of the day playing multiple instruments with ease. Also slaying their respective sets were Autograf live, Wuki, and Huxley while Chris Lake and Eli & Fur both brought the vibes with their performances at Mothership (Chris Lake) and The Colony (Eli & Fur.) 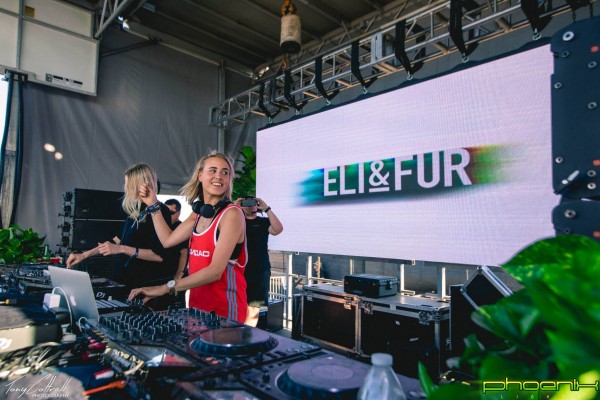 It was at this point that I needed to replenish. Aside from the music of Phoenix Lights, the vendors were spectacular, too! There were so many options for food and drink that it was difficult to choose. With exotic lemonades, delicious wraps, liquid-nitrogen frozen ice cream (yes, you read right), pizza in a cup, beloved chicken tenders and vegan options there was a little bit of something for everyone! The vendors were easy to access as well. A few were near the Invasion Stage which made it easy to grab your food then get back to rage with your friends. If you needed a bit of a break from standing, there were picnic tables near the food vendors by The Fallout stage. What’s better than enjoying your food or drink while listening to some local EDM? 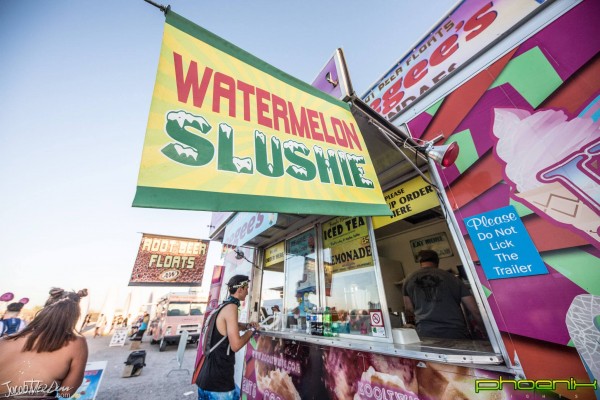 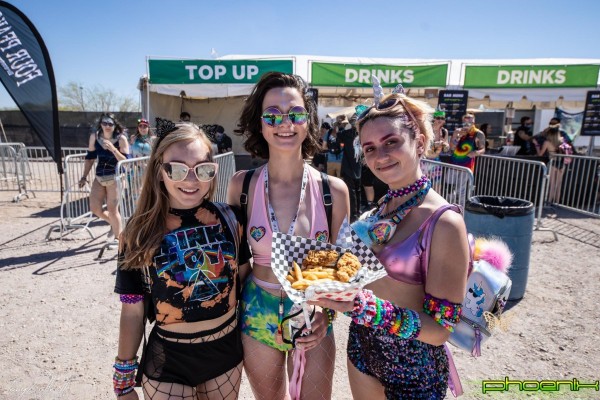 Now you’ve got your lemonade, but who to see next?! The time is 5:50, but it’s almost midnight! Well—time for Midnight Tyrannosaurus anyway. Bringing the filthy bass, and producing the crowd’s most epic bass faces, Midnight T left a lasting impression on Phoenix Lights. If you wanted a little less headbanging a lot more groovin’, Catz ‘N Dogz were doggone fantastic at The Colony.

When I felt like taking a break, it was easy to sit in the grassy area provided. And, as per-usual, Arizona did not disappoint with a gorgeous sunset to wind down the day. 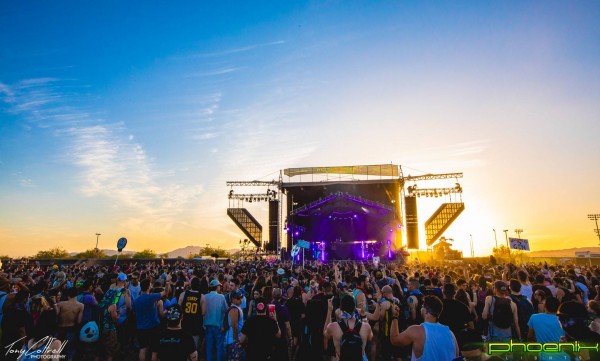 Boombox Cartel dominated the Invasion Stage with a boisterous set, and Zomboy brought back his infamous “Wall of Death.” Towards the end of the night, things only got crazier. Everyone was working their waistline to the bass-line with Diplo, headbanging with Arius, or living their best life with Marc Kinchen (MK).

As the night was creeping to a close Travis Scott captured the audience with his slick rhythm and fun demeanor. He was practically flying across the stage, kicking and screaming with the energy being at an all-time high, letting us know that for this life he cannot change. Bear Grillz made everyone feel the bass, and UMEK sent the audience to a whole new universe as he closed out The Colony. 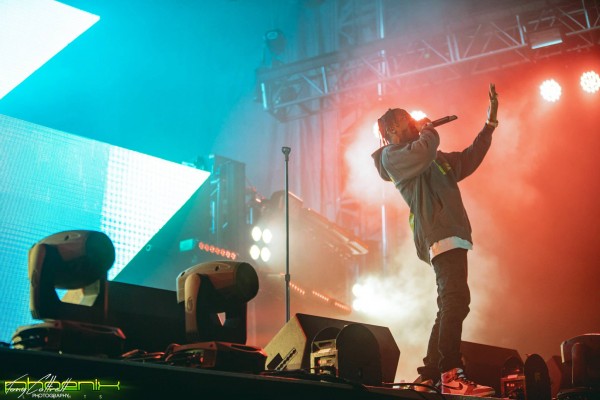 Phoenix Lights 2018 was one for the books. Each year the festival out-does itself and proves to be a major contender not just in the Arizona music scene, but the country as a whole with its top-notch music and production. 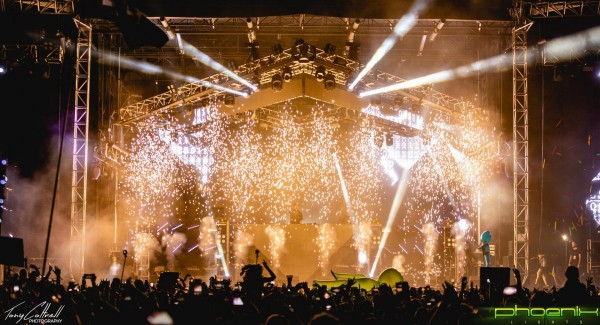 We’ll see you next year when the lights return!