I Bought a VIP Ticket to a Virtual Festival in Minecraft, Here’s What Happened

On Sunday, the internet began buzzing about Fire Festival, a virtual festival held inside the popular video game Minecraft. The festival, featuring artists like Ekali, Luca Lush, Slumberjack, Cray, and more than 50 others was completely free and only required a PC Version of Minecraft to attend. After hearing this news while eating breakfast on Sunday, I quickly canceled all of my plans for the day, connected my laptop to my TV, sat my ass on the couch, and fired up my friend’s old Minecraft account (thanks Derek). 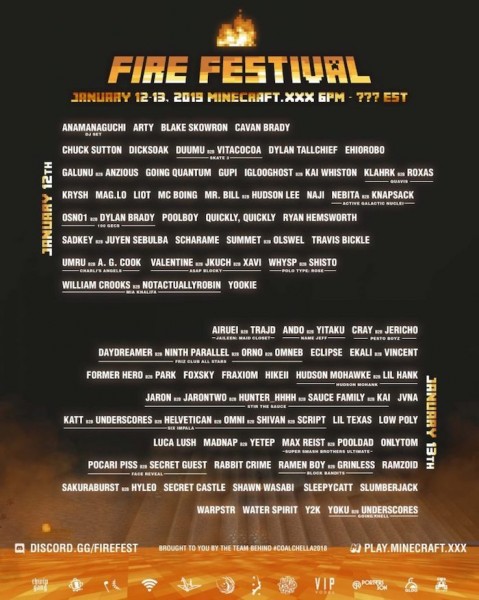 The festival didn’t start for another hour, so I had time to check out the festival’s website and Discord. In the Discord, I discovered that the festival was offering VIP tickets, which included backstage, side-stage access, special in-game merchandise, special Discord channels, and a VIP in-game chat badge. The ticket was only $5, and proceeds went towards The Trevor Project, a nonprofit focused on suicide prevention for LGBT+ Americans. Without even giving it a second thought, I grab that VIP ticket and commit to Fire Festival in its entirety.

I join the server after about 5 minutes of connection issues (Hey, that’s the quickest security line I’ve ever been through) and I am transported into the festival grounds. The first thing I do is run towards two giant portals, which teleported players to the 2 different stages, Angle and Devil. The Angle Stage was a huge amphitheater with a towering DJ booth and dancefloor. The stage was brightly colored and ambient. 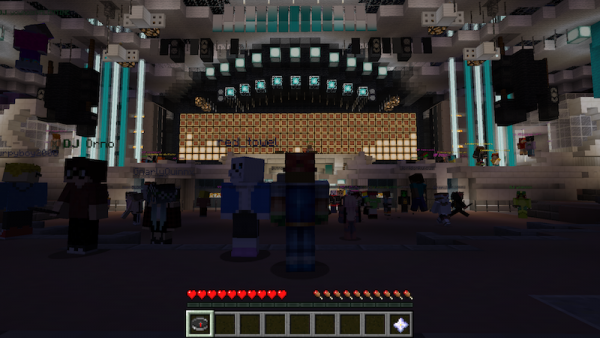 The Devil Stage was a massive fire themed stage with lava, brimstone, and heavy bass music. This stage was by far the gem of the show. It was a stage that could never be humanly possible, which made it special and made me appreciate the concept of a virtual festival that much more.

After exploring the GA area, it was time to check out what was going on in the VIP area. After a quick teleport, I was brought backstage, which featured a virtual bar and lounge. After exploring, I found the entrance to the side-stage and this is where it got fun. While side-stage I was overlooking hundreds of virtual characters moshing, dancing around, and head banging on the rail. It was a cute and unique experience. 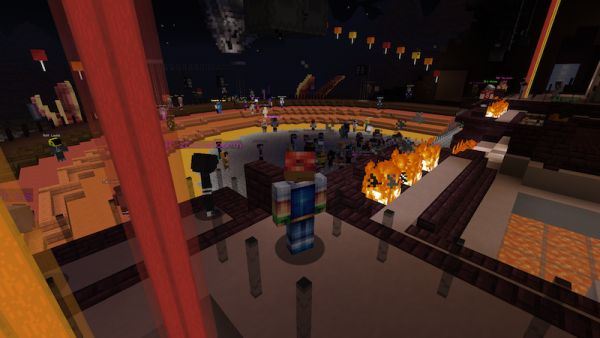 As 9 PM approached, it was time for the headliners to come on. The music was controlled on a third-party website, allowing players to switch between which stage’s audio they wanted to hear. Each artist’s set was 20 minutes long, allowing for each of the over 50 acts to get a chance to shine. Slumberjack kicked off the final hour of the festival, playing an incredibly heavy dubstep set. Following Slumberjack, Luca Lush took the Angle stage and blew everyone away. Immediately after was Cray b2b Jericho and as always Cray did not disappoint. Ekali closed out the show with an amazing set, just as good if not better than his live sets. Right before Ekali took the stage I ran into him backstage and managed to get a picture with the legend himself. 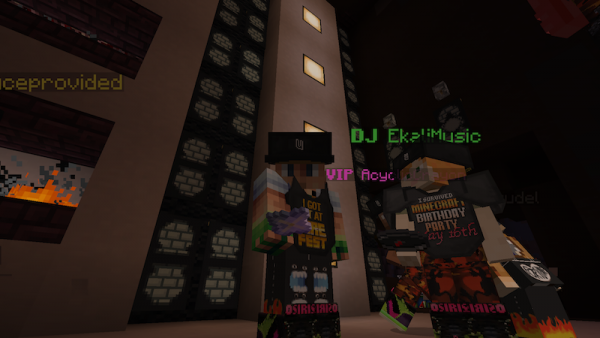 Overall, Fire Festival was a ton of fun. It was unlike any other festival I’ve ever attended and gave my roommates and I a great way to spend the day. I would love to see more of these types of festivals in the future, with longer sets and even more headliners. The festival organizers were able to raise over $1750 for The Trevor Project, which is an incredible feat.