The connection between EDM and video games is more clear than ever. Between live concerts on Fortnite and Minecraft and famed video gamer Ninja working with the biggest producers in the business, the worlds are overlapping more and more.

Now, one of the biggest music video game developers, Harmonix, is currently working on an EDM virtual reality game called Audica. Harmonix is one of the most popular music video game companies and gained fame in the early 2000’s with Guitar Hero and Rock Band. Harmonix describes Audica as a “VR ‘rhythm shooter’ that combines Harmonix’s award-winning music gameplay with precision shooting mechanics and a killer soundtrack, all set in a mesmerizing cosmic arena.”While the game is highly reminiscent of other rhythm-based virtual reality games such as Beat Saber, the main difference is who creates the stages of the game. Beat Saber relies on their users to create stages, while the stages within Audica are made by the game developers themselves.

From the promotional pictures alone, the game looks absolutely stunning. Harmonix has always been pretty good at creating an aesthetic to match the particular genre the video game is based on and Audica is no excuse. So far, Harmonix has released the titles of the first five songs included in the early release: “I Want You” by Alison Wonderland, “Destiny” by 1788-L and Blanke, Afrojack remix of “I Feel Love” by Donna Summer, and “Splinter” by Savant. Harmonix did a great job picking a diverse mix of EDM artists and I’m excited to see what songs will be added in the full release. 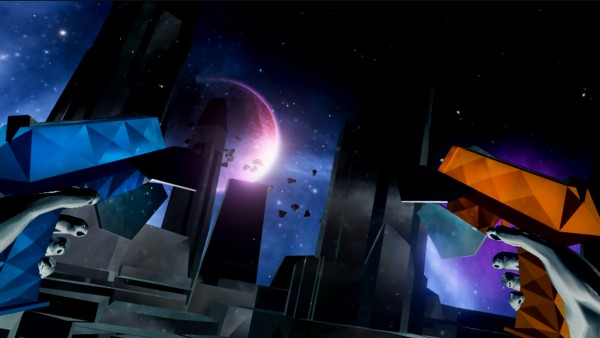 Tomorrow, on March 7th, an early release of Audica will be added to Steam and Oculus Home and might make a pretty good gift for your local EDM and video game fan.