With new releases, new festivals, and new experiences lying in wait with every new year, it’s time to start getting excited about what’s in store for 2020. Thankfully, Ultra Miami is back and ready for another electric weekend under the Florida sun. Known for its beautiful location, insane production, and world-class acts, Ultra has become a staple in the industry and can often be found on many festival-goers’ bucket lists. With past years showcasing incredibly talented, global sensations such as The Chainsmokers, Marshmello, Martin Garrix, and David Guetta, it was to be expected that this year’s lineup would be another smash hit. Though only phase 1 has been announced, many exciting artists, surprising back to backs, and highly anticipated performances already have EDM fans ready to pack their bags and spend their 2020 Spring in style. See the exciting lineup announcement below: 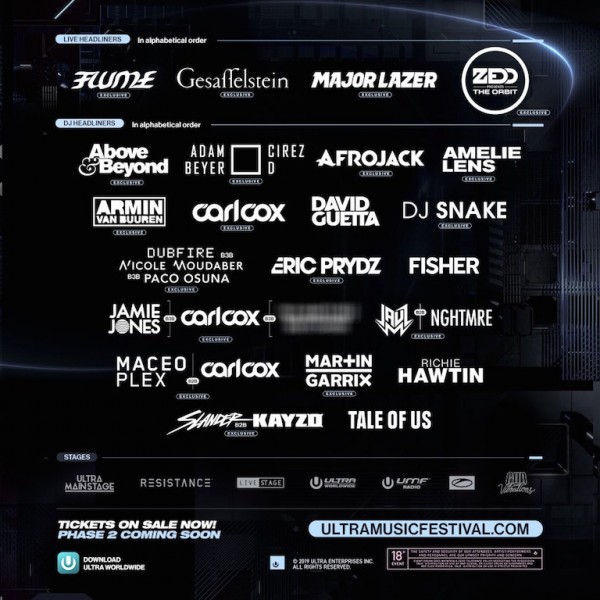 With notable names such as Flume (who was recently nominated for a Grammy Award) and Zedd Presents The Orbit, following his current tour of the same name, in addition to musical sensations such as Above & Beyond, DJ Snake, Eric Prydz, and the return of Martin Garrix, all set to headline the massive festival, many are already purchasing tickets for the wild east coast excursion. Following this, there has been a lot of hype and excitement surrounding Slander b2b Kayzo and Jauz b2b NGHTMRE, which are definite must sees that are sure to be unique and one-of-a-kind sets. With an impressive lineup sure to have a little something for everyone, talented DJs you simply cannot miss, and special back to backs sure to leave you in pure awe and wonder, Ultra certainly comes in hot for 2020. Stay tuned for the rest of the lineup to come!