Almost out of nowhere, Los Angeles’ Dillon Francis has broken from the throng of young electronic music dj/producers. With a stream of world-class remixes and releases, Dillon has caught the attention of some of the top players in club land, including Steve Aoki, Diplo, Will I. Am, Drop The Lime, Sinden, and Tittsworth to name some. In less than a year his blistering productions have been heavily supported by Major Lazer, who opened their show with “Westside!,” a Dutch House-flavored monster that was consistently rinsed by top djs on both sides of the pond, including Sinden and Steve Aoki. The tune is finally seeing a proper release on Diplo’s Mad Decent label, where Dillon will be releasing his “Masta Blasta” EP as well in the near future.. From his first dubstep release on Play Me Records, the heavy “Take Me High” peaked at No. 13 on the Beatport dubstep chart and was played in full by Rusko in every one of his sets for his current OMG tour. In the coming months, Dillon will have releases on Mad Decent, Dim Mak, Top Billin’, as well as Plant Music, where he will be releasing his next club EP. At ease behind the turntables and in the studio, in the electro world and in dubstep, Dillon is what you would call an open-format electronic dj who sees no delineation between making music and playing it. He has gotten huge support from the most important dance music blogs (Dim Mak, Mad Decent, Discobelle, Gotta Dance Dirty) ever since releasing his first bootlegs last year, and 2011 promises to be Dillon’s breakout year.

RSVP to the event on Facebook and buy tickets with the links above. Learn more about Dillon Francis here. Join our text list by filling out the form in the upper right of this page or  texting RBVIP to 545-454. Email vip@relentlessbeats.com for table reservations. 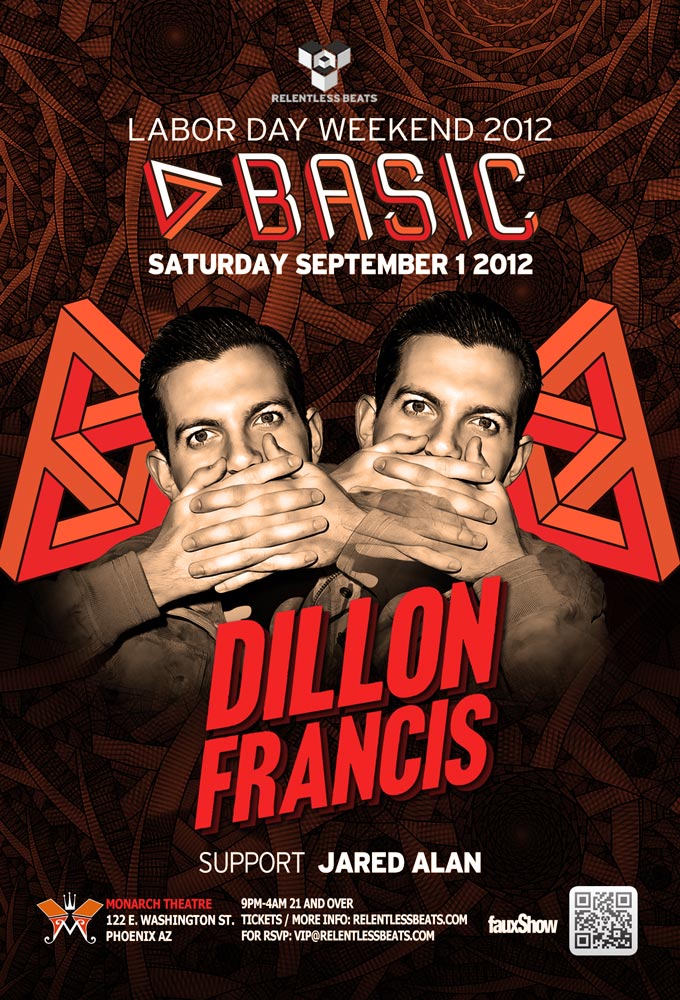