If you’re someone who isn’t afraid to “Arrive beautiful, leave ugly” as Dada Life would say, then Life In Color is your spirit festival.

This epic paint party hit Tucson in April and everything about it was perfection. With the rising Focus Fire opening for 3lau who hyped the crowd for Bro Safari, this simple yet massive line-up was all the Arizona ravers needed for a worthy show… but then they got paint.

A sea of eager electro-enthusiasts dressed in white quickly became a sea splashed with green, blue and pink after Focus Fire’s first drop. There was not a dry person in the crowd and that’s the way everyone wanted it. Paint was seeping through everyone’s clothes, embedded into everyone’s hair, and in bottles ready to be squirted some more.

There is truly no feeling like hearing the drop to your favorite song and seeing a gigantic cannon blast paint showers from the stage. If you’ve never been to LIC and aren’t craving to go, you must be sick or delusional because I guarantee you’ll take the longest shower of your life, but it will be after the best night of your life.

If you weren’t apart of the crowd turning up in Tucson, the rave Gods are working in your favor. Life In Color Phase 2 “Big Bang- The Creation of Color” World Tour has just been announced and already it is nothing short of highly anticipated.

A whopping 42 dates were announced in cities all across the world including Hong Kong, Ibiza, Johannesburg and Lima. A world-wide paint party would be nothing unless it touched down in the U.S. with it’s most dedicated fans. The tour begins June 17 in Ibiza with a stacked line-up featuring Borgeous, Borgore, Chainsmokers and Laidback Luke. It hits the U.S. June 28 in New Jersey with LIC veteran Bro Safari, Zaxx, Ansolo, TJR and Showtek.

Mark your calendars and prepare yourself- Phase 2 has U.S. dates all over the world, so no matter where you are, you can make your paint to the biggest paint party tour yet. The line-ups for the tour have yet to be fully announced, but the few artists that are announced are more than promising. The first few shows have their headliners revealed, but after Adventure Club takes Buffalo, NY, the rest of the line-ups become a complete mystery. With LIC previously hosting NERVO, Krewella, Diplo, Hardwell, Sebastian Ingrosso and basically every major DJ alive, they’re not in the business to disappoint you. 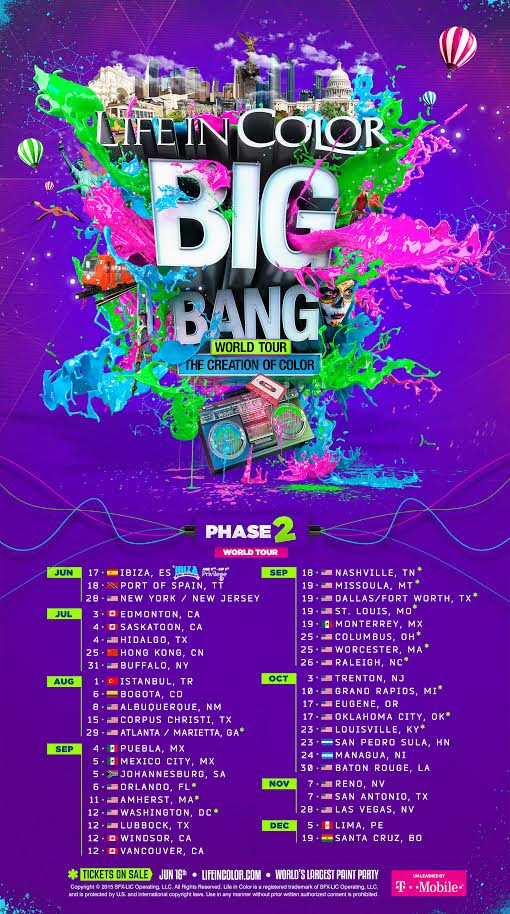 Phase 1 wrapped up outstandingly and Phase 2 is about to be underway. Don’t forget to snag your ticket to the world’s largest paint party. Get ready for (cham)paint showers, dirty dance music, and probably the best night of your life.

Connect with Life in Color: