Just yesterday I got some of the most exciting news yet as a journalist, that I will be receiving a press pass from Insomniac to attend this years Nocturnal Wonderland! The excitement and suspense are unreal as there is only a matter of days remaining on the countdown. For my first three day festival experience, I think Nocturnal is going to be the perfect eye opener to an entire new world of unity and happiness.

Celebrating its 20th anniversary, Nocturnal Wonderland will take place at the San Manuel Amphitheater & Grounds in just one week, landing on Labor Day weekend in San Bernardino, California. In honor of their big two-zero, Insomniac will be extending the dangerously good times from two to three days and has rounded up a jaw-dropping lineup stacked with some huge names and crazy talent. Bassnectar, Pretty Lights, Alesso… are you kidding me? I can’t even wrap my head around how many mind blowing sets I am going to witness.

Within the three days of magic, there will be 95 different artists captivating the crowds. But between the five different stages, there’s no way of catching them all. It’s going to be harder than I thought to decide which artists I can’t miss, but there are of course a select group I have my heart set on. On Friday, I’m most excited to see Armin Van Buuren, Datsik, Kennedy Jones, Shaun Frank, Snails, and Trollphace. I was pumped to see those last two names on there considering I was previously planning to see them in Az the following day.

Saturday is jam packed with some of my favorites like Alesso, Deorro, Flosstradamus, Knife Party, Pretty Lights, and Yellow Claw. It’ll be the perfect mix of the feels as well as some straight up filth. And to conclude the weekend, Sunday is hands down the day that I am jumping up and down for. Bassnectar was really the only name I needed to feel happy tears boiling inside me, and the others that followed only made me actually want to cry! Audien, Galantis, Kaskade, Keys N Krates, LOUDPVCK, Madeon, Paper Diamond, and Slander. Its going to be the perfect day to end on, and I know will make it very hard to say goodbye to the wonderland. 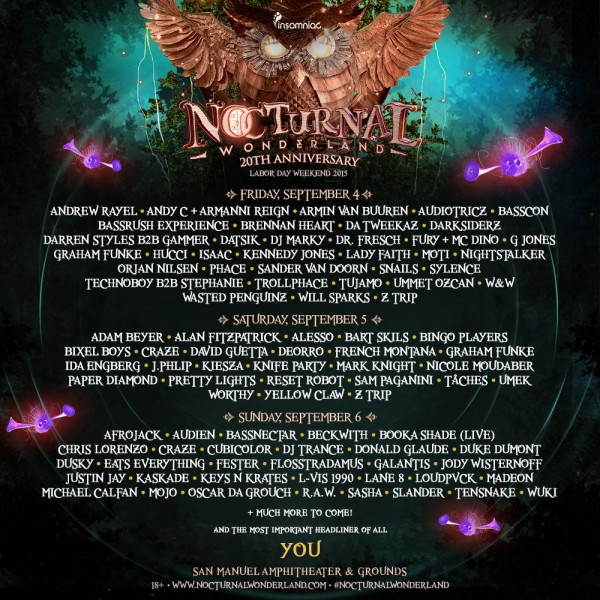 With so much to offer from not only the music, but the art and atmosphere in itself, the anticipation is like a child on Christmas eve smiling ear to ear at the thought of what’s about to happen. In just 7 short days, insomniacs from all over will unite to take it all in. Stay tuned for coverage from my magical weekend at Nocturnal Wonderland 2015!