If you haven’t heard the future bass-infused music of London-based producer, Daktyl, I suggest hopping onto Soundcloud immediately and taking it all in. After releasing his mesmerizing cyclical LP via Mad Decent earlier this year, as well as being confirmed as a guest at various Mad Decent Block Parties around the country, Daktyl has recently been confirmed as one of the supporting acts for the upcoming So Cute! Tour, headlined by Slow Magic and Giraffage. This will not be the first time that Daktyl has worked with the ever mysterious Slow Magic, having released a number of remixes of each other as well as supporting Slow Magic’s 2014 North American Tour. 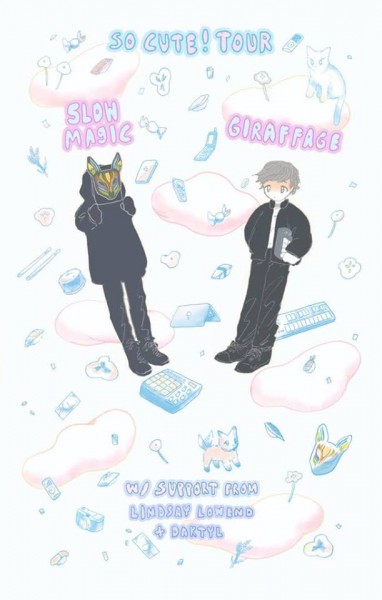 So far this year he has played in a number of cities across Europe, the Capitol Hill Block Party in Washington state, and even HARD Summer in Pomona, CA. With that said, it has been a big year for Daktyl and with his recent tour news it will only get bigger from here. But before he heads off to play Mad Decnt Block Parties and So Cute shows around the country, we had the opportunity to speak with Daktyl about his music, it’s effect on his audience, and what’s to come in 2015.

RB: So your set at HARD Summer certainly went right along with the name of the festival, how was it to play to an audience like that? How was the HARD Summer experience?

Daktyl: It was amazing! The crowd had so much energy. I was a bit worried about the turnout as it was so early in the day and I was on at the same time as some awesome artists, but it worked out great. There were a few sound issues at the start of my set, but it got sorted quite quickly, overall had an insane time!

RB: Did you get the opportunity to catch any other sets? If so, which were your favorite?

D: Yes! I was basically at the Purple Stage all day, the line-up was amazing. My favorite was probably, Lido, his new live set was phenomenal.

RB: Who do you think influenced you most while you were developing your sound and where did you find inspiration to create?

D: There’s a very long list of people! When I first started getting into electronic music I was listening to a lot of people like Flying Lotus, Nujables, Caribou, Bonobo… Before then I was listening to a lot of hip-hop, stuff like Nas, Biggie, and a lot of post-rock/acoustic music. To this day my favorite musician is John Frusciante. Then Soundcloud came along and paved the way for this whole new era of amazingly talented producers.

RB: Based on one of your Facebook posts regarding your music helping a fan with drug addiction overcome his personal hurdles, how does it feel to connect with your audience on such an emotional level and, especially at such an early stage, to have such a profound effect on someone through music? 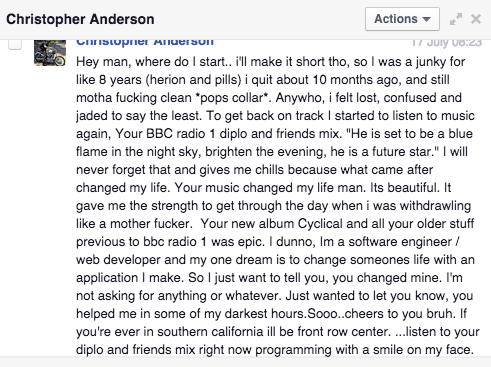 D: That was the most amazing message I’ve ever recieved. I was so moved by it. It honestly felt better than any “achievement” I’ve made in my career so far, to have helped someone who was struggling so much and to change someone’s life like that.

RB: What is your goal with your music on a storytelling level? What do you want to say?

RB: Your Cyclical LP was just released a couple of months ago via Mad Decent, how is it working with them and touring with the Mad Decent Block Parties?

D: It’s been great, I love the whole Mad Decent Team and can’t wait to play the Block Parties!

RB: In addition to the Mad Decent Block Parties, you are headed off to tour with Slow Magic and Giraffage on the So Cute! Tour this November. What can we expect from this tour?

D: It’s going to be a lot of fun. Both Slow Magic and Giraffage have amazing live sets and are awesome people. I can’t say exactly what to expect from my set yet, but it’s definitely going to be very different to my shows in the past!

RB: You have a remix of Slow Magic’s “Girls”, what was it like playing around with that track and incorporating your own sound into the very different sound of Slow Magic?

D: That was a really fun remix to do, the lead vocal was great to play around with. It was an awesome feeling remixing Slow Magic as I’d been a fan of his long before I even started making electronic music.

RB: Any last words for aspiring producers, DJs, and just people looking to get into the industry?

D: Work hard, never give up, experiment, don’t be afraid to share your music, and most of all enjoy yourself!

Here are the upcoming dates for the So Cute! Tour:

If you have the opportunity to make it out to one of these shows I would highly recommend doing so. In the mean time stay tuned for more tour news from Daktyl as we are still expecting a Phase 2 announcement of So Cute! Tour dates!