After two days of music, dancing, and good vibes, Beyond SoCal has come to an end for 2016. Approximately 65,000 enthusiastic Headliners danced their way through Insomniac’s colorful world at the beautiful San Manuel Amphitheater & Grounds in San Bernardino over the weekend. More than 50 incredible artists performed across four newly designed stages and two booming Art Cars, while pyrotechnics and confetti rained above the crowd. 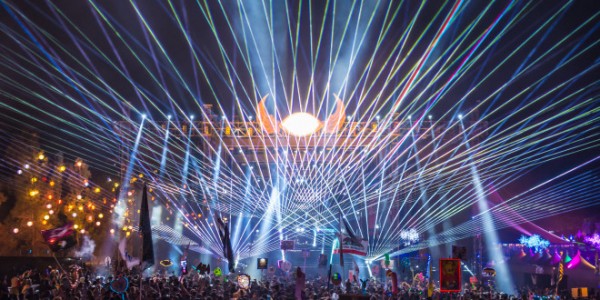 Entering through the festival gates, fans were gifted custom-made Beyond Wonderland kaleidoscope glasses, creating twinkling projections underneath the neon-lit Star Port tunnel. Once inside, Headliners were met with the sight of a giant chess piece surrounded by handcrafted Zomes – wooden art installations that doubled as climbable chill zones for scenic views atop Lookout Mountain. As guests wandered down the hillside, the Outer Realm stage and its winged-eye medallion pulled fans in with the sounds of Bassrush and Dreamstate acts.

Festivalgoers enjoyed new whimsical activities and adventures in every corner of the event including an inflatable playground, giant ball pit and two incredible art cars. Pulled straight from Beyond Wonderland’s thematic trailer was the golden Wench Art Car, brought to life as it roamed the festival grounds. This brand new art car ship was helmed by the beautifully costumed Alice and the intricately dressed Wench Queen. VIP Headliners also had the chance to attend the Mad Hatter’s Tea Party, complete with delectable pastries, specialty hot beverages, complimentary food truck tastings and kandi-bracelet crafts.

Thousands of guests slept under the stars in the vast Beyond Wonderland Campgrounds. Early morning yoga and crafts were available, alongside a slew of water conservation education activities put on by non-profit, Global Inheritance. The environmental organization brought campers the Oasis Water Bar, equipped with a variety of fun water tastings, as well as the Rain Supreme art exhibit, showcasing eccentric rain barrels curated by 32 artists across California. As night fell, Headliners were treated to the Silent and Not So Silent Discos with appearances from Chris Lake, Go Freek, and DJ Major Airborne.