As of March 29, Soundcloud will now offer a paid subscription plan: SoundCloud Go.

Although reading the words “paid” and “SoundCloud” in the same sentence may make you shiver, be aware that the free version of the audio platform will still offer the same functions as before, allowing users to stream 125 million+ tracks.

So what is SoundCloud Go?

According to The SoundCloud Blog, it’s “the same SoundCloud you’ve known for years taken to the next level: with an expanded catalog of tracks that are new to the platform, new features and new functionality.”

For $9.99 a month, or $13 a month if purchased on an iOS device, SoundCloud Go offers listeners more features including an expanded catalog of songs, offline listening, and ad-free listening. 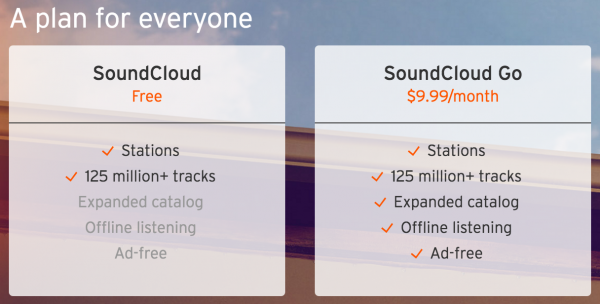 SoundCloud’s new discovery features match your tracks with the right audience. What’s also cool is that your listeners with SoundCloud Go will be able to download your tracks too, and regardless of whether or not they have a cell signal, each time they play your track, it will boost your stats.

Like many of you, I was absolutely obsessed with SoundCloud. I found pretty much all of my music here and it was all available for free. I signed up for the free 30-day trial of SoundCloud Go to see what it was all about and here’s what I thought:

-Absolutely love the offline listening mode. I used to go over my cellular data every month from streaming music on SoundCloud. Being able to have songs available to me offline is a huge plus and could potentially save me money in the long run.

-There are awesome offline listening settings: you can turn on “Save automatically” which will save all your current and future Likes and Playlists offline

-SoundCloud claims more music will continue to be added into its expanded catalog.

-No ads, although the SoundCloud ads never really bothered me

-The songs you save offline are saved to your device. So if you’re constantly getting that “Storage Almost Full” message on your iPhone, saving 252 of your Likes and 13 of your favorite playlists might not work for you.

-Top 40 hits? Maybe it’s just me, but SoundCloud was always that place where the underground tracks and remixes lived. By including mainstream music SoundCloud definitely loses some of its charm.

-Although The SoundCloud Blog said, “With SoundCloud Go, the catalog now includes a slew of new tracks and albums from the biggest names in music.” I tried searching for “big names” such as Justin Bieber, Fetty Wap, and Twenty One Pilots with no results. However I believe the new content will be uploaded over time.

-I’m nervous to see how artists who currently have their content available for free streaming will react. I would hate to see every artist end up creating only SoundCloud Go content, forcing us all to switch over.

I’m not sure if I’ll continue paying for this app. For a broke college student like me, going from paying $0 a month to nearly $10 doesn’t make sense.  However if my favorite music producers start making their content available only with a SoundCloud Go subscription, I’ll be forced to spend. Let’s hope it doesn’t come to that though.

Everyone has different music needs so I encourage all current SoundCloud users to do the free 30-day trial of SoundCloud Go!