Skrillex is Set to Shred the Pool Memorial Day Weekend

The Release Pool Party series has already kicked off and announced some amazing headliners such as DVBBS, Diplo, Firebeatz, and Robin Schulz. They came out strong with these headliners and better yet, they haven’t stopped and probably aren’t going to stop at all until the Release series are over. In fact on Memorial Day Weekend Relentless Beats and Release just announced that Skrillex will be performing on Saturday, along with the aforementioned Robin Schulz on Sunday!

So I don’t think I have to say much about how amazingly dope this day is going to be. Skrillex has been around for a long time and is easily one of the most notable icons in EDM. From being a member of Jack U, to his debut EP My Name Is Skrillex back in 2010, he’s touched pretty much every corner of the music scene one way or another. He even won an award as Jack U for best dance record album a while back at the Grammy’s! Check out the playlist below as well for some of Skrillex’s most well known songs.

One more thing I’m gonna mention to you guys is the introduction of promo codes for Skrillex’s concert and all the other Release pool parties as well! Skrillex and all of memorial day weekend is going to be insanely lit so using these promo codes will help save your wallet’s life, because I know everybody is gonna want to be at Talking Stick Resort pretty much every weekend from here on out. If you want to, go find a local promoter on Facebook and they can hook you up with one! We’re seriously all over so just posting and asking if anyone knows one should work!

When you do have that access code, it can be a little tricky putting it into the system online so below we put a picture up to guide you through it! 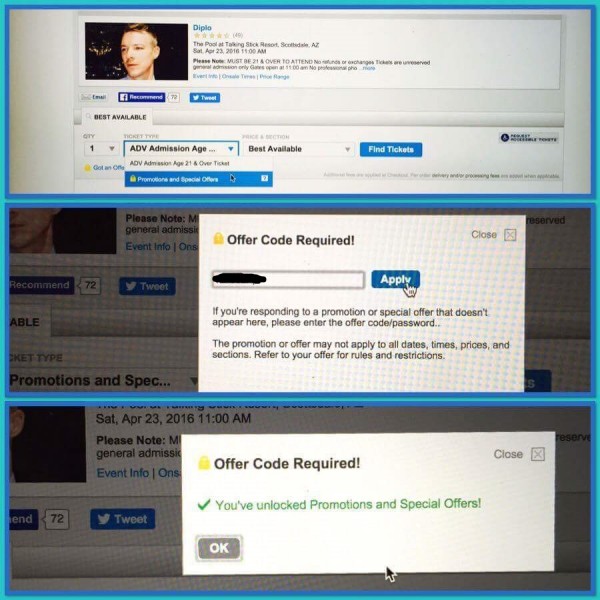