The second annual Dirtybird Campout is just around the corner, and if the anticipation isn’t already killing you be prepared. The good people over at Dirtybird Records and event production company The Do LaB have released the first phase of this year’s lineup, and it is stacked. The lineup thus far consists of many of Dirtybird Records own the likes of J.Phlip, Christian Martin, Billy Kenny, Catz N Dogz, and Walker & Royce. The phase one announcement also includes artists outside of the Dirtybird family such as Bruno Furlan, Paranoid London, and comedian Reggie Watts. 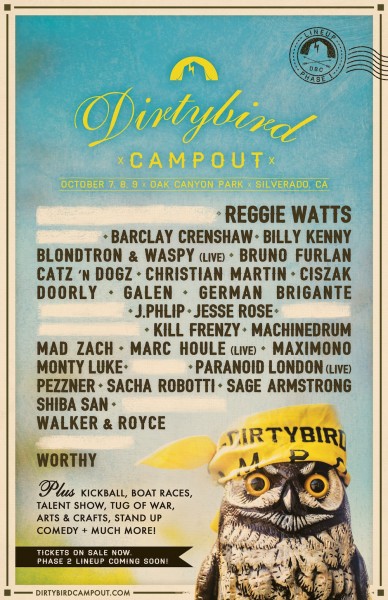 Dirtybird Campout will once again be held at Oak Canyon Park on October 7th through the 9th in Silverado, CA. The campout brings forth an experience unrivaled by any other music festival. Aside from the amazing talent on this year’s line up the campout offers a number of activities to keep the good times going. Some of this year’s activities include a talent show, boat races, tug of war, kickball, and of course delicious Dirtybird BBQ. A full list of camp activities will be announced July 26, along with the second phase of the lineup.

The Dirtybird parties were born way back in 2003 in San Francisco’s Golden Gate Park, thrown by Claude VonStroke and friends to showcase their new music. In 2005 Claude teamed up with fellow producer Justin Martin to create Dirtybird Records. Since the time of it’s creation, Dirtybird Records and it’s artists have gained a cult-like following as well as found exponential success with it’s releases and their Dirtybird BBQ tours.