Early last week Relentless Beats announced something special. A genre of EDM usually swept under the table by most promoters would be getting its own dedicated stage at one of their shows.

Enter the mayhem as we go Relentless With Style at RBs FIRST dedicated Hard Dance Stage. Featuring; Nodari, Arctus, The Wicked and Mrotek each act features different highlights of the Hard Dance genre. They’ll be playing on the Hard Dance stage in support of Noisia, Cookie Monsta and Dieselboy the 15th of July at The Pressroom. 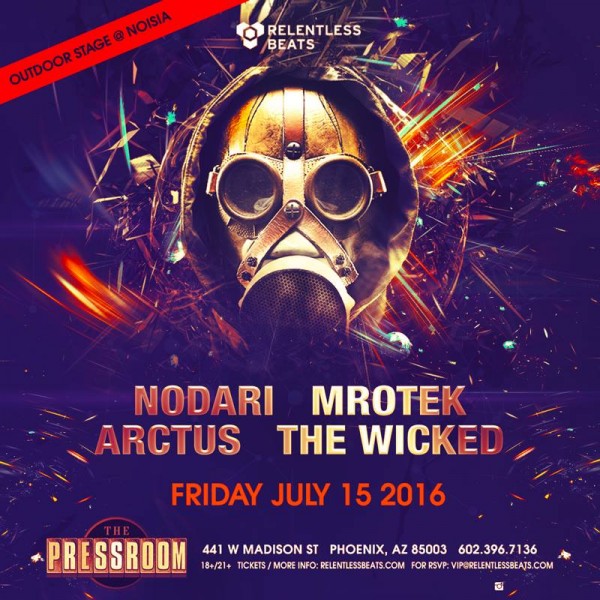 Nodari can be easily described as an open format DJ/Producer. Having created tracks ranging from Bass to Happy Hardcore the rising Arizona native bares a resemblance to the styles of Dj Gammer and Kayzo. He recently did a remix of Marshmello’s track ‘alone’.

The following three DJ’s having just arrived back in the states after a month in Europe, hitting festivals like Defqon.1 are about to go biblical on Arizona.

Arctus, referred to secondly as “The Prince Of Darkness” brings in a style straight from the depths of Oblivion. His remix of Prime Suspects’ track ‘Biblical’ shot up to No.17 on the Hard Dance charts. Arctus, having come from a heavy metal background knows how to turn the party to 11.

The Wicked owns the decks, speaking technically he is one of the best DJ’s in the industry. Having released his track ‘Heartless’ early this year on DHD, it’s had play time in Hard Dance podcasts and stages across the globe. The dark oscillating tones of his industrial and hip-hop influenced tracks will bring light to his name.

Mrotek has been labeled as one of the BEST Rawstyle producers in the United States. Having multiple tracks land in the top 100 charts we joke about putting his home address at hardstyle.com. Having artist support world wide on his music, having tracks played at this past Defqon.1 and as one of the most wild DJs we could find he will close out the Hard Dance stage at Noisia.

For tickets and info to the show: http://bit.ly/NoisiaStyle

Keep up to date on all things Hard Dance: www.facebook.com/BPMBoost