It’s time to go back to camp! With Summer’s close just around the corner, it’s time for one last end of summer adventure and what way is better than getting down with the Dirtybird crew? Dirtybird Campout is back with more activities, more antics, and one killer lineup that’s sure to be so lit, it’ll warm up a breezy October weekend. 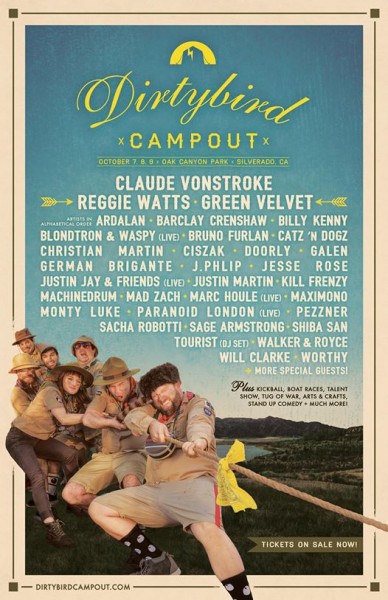 Mainstay Dirtybird Players J. Phlip, Justin Martin, Kill Frenzy, and Christian Martin are set to lead the packs of campers through the nights with sets filled with bomb beats and golden tunes. Along with being the master of ceremonies at Dirtybird Campout, Claude VonStroke will be bringing campers a Barclay Crenshaw set, which was one of the most talked about sets at the inaugural Campout. Campers will also be dancing to the tunes of returning camp counselors, er, I mean DJs, Sacha Robotti, Billy Kenny, Worthy, and Walker and Royce (who’ve recently posted their killer set from last year’s Campout here). Joining the fun at this year’s Dirtybird Campout will be Catz ‘n Dogz, Maximono, Shiba San, Ciszak, and Green Velvet! Can we start speculating about a Get Real set yet? Are we getting another beautiful Martin Brothers set? With so many action-packed performances on deck, it’s almost easy to forget that there’s incredible activities to go along with the soundtrack. 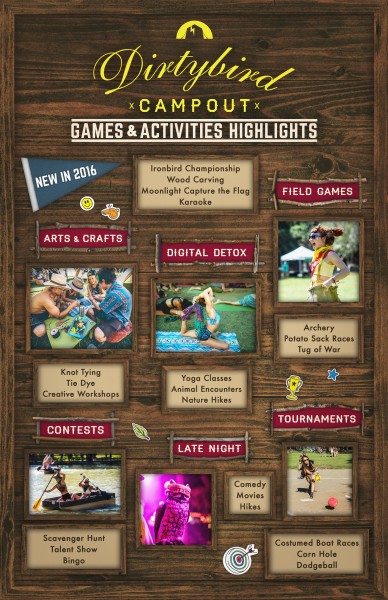 Yeah, it’s fun to dance to some of the best house music around, but have you ever felt the power course through your veins as you defeat the opposing team in a Tug ‘O War battle to the tunes of Dirtybird? Well, now you can! Campout is bringing last year’s favorites, such as the Costumed Boat Relays, Face Painting, and yes, Tug ‘O War, but Dirtybird Campout has also got some fresh games and activities. This year Campers can take their pick of activities, including a Wood Carving Workshop, Campout Cornhole Tournaments, and Moonlit Capture the Flag. There was also a mention of Human Tie Dying? If you’ve got a curious mind and a competitive streak, along with a thirst for never-ending house heaven, Dirtybird Campout is for you!

So come all, campers new and old, and grab your tickets here. This year’s Dirtybird Campout takes place on October 7-9 at Oak Canyon Park in Silverado, CA. Be prepared for nonstop incredible tunes, around the clock activities, and an all around wonderful experience!