Fki 1st, one half of FKi (F*ckin’ Kickin’ it), the production duo also consisting of Saucelord Rich responsible for tracks like “Where the Dank?” with Flosstradamus, “Decisions” with Borgore, “Watch Out” with 2 Chainz, and “White Iverson” with Post Malone, made it out to Phoenix this year for the 3rd annual Mad Decent Block Party.

Taking both his skills as a producer, as a DJ, and as a rapper, 1st made for one of the most unique performances at the Block Party this year, and we had the pleasure of sitting down with this extremely successful Atlanta-based producer and we discovered that his roots dig much deeper than what appears on the surface.

Check out our sit down and familiarize yourself with this ever-adapting rapstar:

So, just to familiarize our readers with who you are, can you tell us a little bit about yourself, how you linked up with Saucelord Rich, and where your passion for music stems from?

I mean, my passion for music has really just always been there. I don’t know where exactly it stems from. I jut always wanted to learn everything there was about music from engineering, to producing, to DJing, to being an artist. Really everything just stems from me wanting to learn how to do it. I hear music and I’m just like, ‘How the f*ck did Timbaland do that? How the f*ck did Pharrell do that? How the f*ck did Skrillex do that?’ You know what I mean? I’ve just always appreciated music and I’ve always appreciated the sound and the chords. It’s like a recipe putting music together. It’s fun. There’s different sauces and different ingredients you’ve got to put together to complete music.

I met my bro Saucelord Rich, I met him in High School and we’ve been working since then.The last track we produced together was “Watch Out, Lil Bitch” for 2 Chainz. We made that together and it just went gold, so you know, it’s a good time. 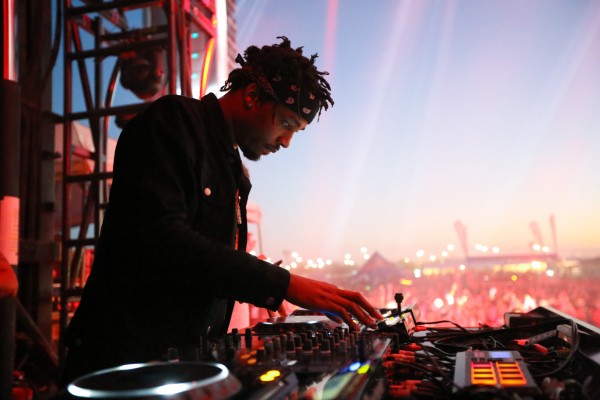 Do you think that growing up in Atlanta influenced the direction of your career at all?

Growing up in Atlanta definitely influenced me. I feel like some of the best artists and producers are from Atlanta; from Lil Jon to Zaytoven to FKi to Metro Boomin, Jermaine Dupree, there’s just so many producers from Atlanta. I’ve lived in Atlanta all my life so that’s all I’ve been hearing. Every single day there’s these different artists, different trap music.

It’s definitely influenced me. Lil Jon is one of my heroes. Everyone is just catching on now and its reaching the mainstream. It’s time for that.

How did your relationship with Mad Decent come about and how has it been traveling with them on the Block Parties?

The whole Mad Decent situation started when I met Diplo, I think it was like 4 years ago now. He was DJing in Atlanta at MJQ; and I don’t know if you know what MJQ is, but MJQ is like a small hole-in-the-wall club. It’s actually an old bomb-shelter. So I’m like, ‘yo Diplo’s in here DJing, this is f*cking crazy.’ And one of my other homies from Heroes and Villains, Danny, introduced us and we went to the studio that night and he was showing me tips and tricks and shit. This dude was real humble and cool, ’cause I’m just a newcomer, we had just produced “Make it Rain” for Travis Porter and he was playing it, so we just went to the studio and kicked it, thats kind of where it all started.

Now, ‘1st Time For Everything,’ my first project, Wes just hit me up and was like, ‘yo, you need to put something out,’ and yeah, they help me put everything together.

‘1st Time For Everything (Part 2)’ is coming really, really soon.Just pay attention to all of my networks @FKi1st, I’m releasing something new every first of the month and ‘1st Time For Everything (Part 2)’ is definitely coming soon. It’s got Lil Uzi Vert on it, Post Malone on it, all my friends that I love to work with. ILoveMakkonen, 2 Chainz, just a little bit of everybody, man.

You mention Post Malone, who you collab with on ‘1st Time For Everything,’ and also who you are credited with discovering. What is your relationship with Post and how has your music evolved together?

I met Post like 2 and a half years ago randomly in LA, he was rapping and he was just like, ‘bro, move to LA. Just whatever you gotta do, come to LA and you can set up studio in my spare bedroom, f*ck it I’ll just sleep in the closet.’ If someone says some shit like that, you’ve kind of just got to follow them. I already knew he had some talent too cause he was producing, so I came out and six to eight months later we made “White Iverson” and it’s history from there, man.

That’s my brother though, and he’s definitely evolved into something crazy. He’s about to take music to a new level, his new album is amazing. I executive produced his new album, and there’s a lot of crazy stuff coming.

Bouncing off of that, the final question is how important is sticking to your gut and persisting with your music and how can you relate your story to that message?