In case you haven’t heard of RB Deep yet, it’s an extension of Relentless Beats dedicated to the deeper side of house and techno. RB Deep hosts shows across the valley including UMEK, Gina Turner, Nicole Moudaber and more and often has a stage at Relentless Beats festivals. You may have noticed the RB Deep stage at Global Dance Festival, and the upcoming RB Deep lineup for Phoenix Lights. Now Wet Electric is the next party to get hit with the RB Deep takeover. 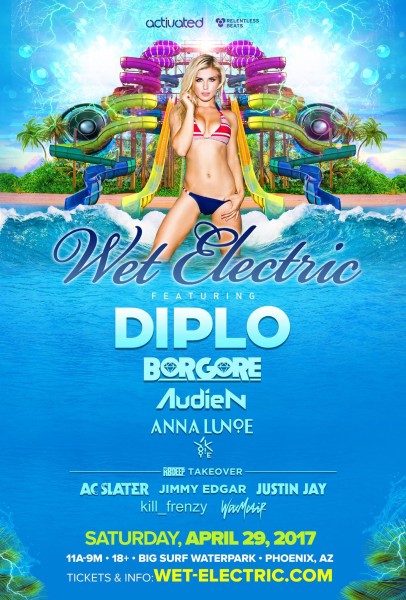 AC Slater is a king of bass house grooves, He’s known for his “Night Bass” sound that fuses elements of house music with the dirty basslines of UK garage and old-school synths. In 2008 his remix of “Turn the Music Up” on Trouble & Bass became a bass house anthem. Since then he’s released over 100 tracks and created his own label, Night Bass, that continues to release some of the most groundbreaking and forward-thinking bass-heavy dance music in the underground.

Jimmy Edgar is a techno wizard from Detroit, Michigan. At 18 he signed with Warp Records and spent his early 20’s recording and touring. He’s influenced by Influenced by funk, street beat, and R&B making for a one-of-a-kind sound whenever he’s on decks. Jimmy Edgar’s innovative mind reaches far beyond music as he’s also an artist, fashion designer, and director.

Justin Jay is one of two Dirtybird artists heading to Wet Electric this year, and he’s the youngest in the Dirtybird family. His innovative mind and style has put him amongst some of the best in the industry. Justin’s sound mixes his soul, funk, and jazz roots in a nostalgic, yet forward-thinking manner that yields his unmistakable brand of house music. Last year Justin Jay & Friends created a sperate label and project, Fantastic Voyage, that puts out compilation albums, mixtapes, and has even led to a tour.

Kill_Frenzy is a Belgian born and Berlin based producer with an infinite affinity for crude, lewd, deep and dark vibrations. He flirts with different genres while at the same time keeping that original ghetto house and booty flavor. He’s been touring with his Dirtybird boys and has a new EP coming out this week, so expect some new tunes this Wet Electric.

Wax Motif is an Australian producer with a unique production style and fresh mixing skills have kept this rising producer in high demand. He’s been a pioneer of the g-house movement. Wax Motif has played EDC Las Vegas, New York & Mexico, HARD Summer & Day of the Dead, Holy Ship and now Wet Electric.

Don’t miss out on the pool party of the year; Wet Electric takes place on April 29th at Big Surf Waterpark, get tickets here.