We’ve got a full weekend of killer tunes ahead. We’re starting it off with shows all over the Valley–Sharam Jey at Barsmith, Styles & Complete at Gypsy Bar, and Sam Pace at Salt on Friday night. Robbie Rivera takes over Talking Stick Resort Saturday afternoon while Doctor P performs at Monarch and Mike Jones wraps it all up at Salt on Saturday night.

Sharam Jey is a DJ, producer and label maker from Cologne, Germany. He started in the early 90s putting out two studio albums, various mix-compilations and more than 100 releases on some of the most established labels such as King Kong Records, Nervous Records, Off Records and many more. He’s always busy working on remixes for artists like Moby, Gossip, Faith No More, Faithless, Diplo & Don Diablo, Mason & Roisin Murphy to name just a few. He released a full-length album, In My Blood, last year and a compilation album, Sharam Jey & Friends earlier this year.

Styles & Complete are LA based producers by way of the Dirty South. Originally from Charlotte, NC they were pioneers in bringing the Trap sound to electronic music. Bringing a Punk-rock like energy to their live set, they’ve toured across the country playing major festivals like Electric Zoo, Tomorrow World, Firefly, Summer Camp & Electric Forest. Last year they were a part of Borgore’s “Buygore Show” tour. 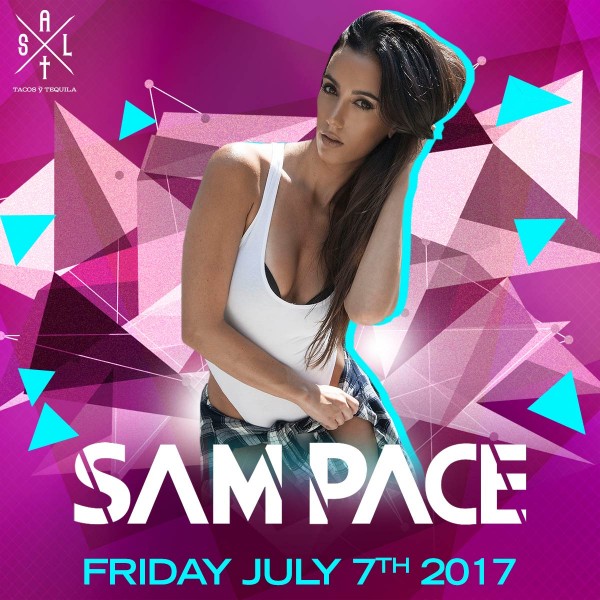 Sam Pace has instantly become one of the hottest up and coming DJ’s, steadily making a name for herself in the male-dominated electronic dance scene in the past year. Beginning her career, as well as based out of New York City, she has become a regular behind the decks performing with acts such as Eric Prydz, Afrojack, Nervo, Chuckie, Tommy Trash and Cedric Gervais just to name a few. With a natural ear for track selection and flawless mixing technique, she creates a captivating and dynamic experience that spans sub-genres from progressive to vocal to in-your-face electro seducing and inspiring crowds wherever she goes. Dividing her time between night club gigs and studio sessions, Sam is currently forging her own sound to create impact on the modern dance scene.

Once described as the mystery men of disco, Tiger & Woods have achieved the demi-god status for their smooth and glittery disco sound. The self-proclaimed ‘sample freaks’ come from Rome and although they kept their identities secret for quite some time we now know Larry Tiger and David Woods are the men behind the music. The duo first formed back in 2008 after meeting at Red Bull Music Academy in Barcelona.  Since then they have released multiple EPs and albums on the reputed Running Back Records and their own imprints, Editainment and most recently Tiger and Woods Records. Their sets are packed with carefully selected funk and disco tracks, ramped up with some modern house and techno flavor.

One of the first to popularize the tough, sexy tribal house sound, Robbie Rivera is a living legend who remains at the top of his game. His recent collaboration with Bob Sinclar reached #1 on the Beatport House chart and has over 600k Spotify streams and YouTube streams. This summer the number one track played on the world’s best festivals was the new version of his classic track “Funkatron” together with the UK’s Tom Starr on Axwell’s Axtone Records. In his expansive career, Robbie Rivera collaborated or remixed several major acts spanning many genres of music including Kylie Minogue, Madonna, Basement Jaxx, Deadmau5, Tiesto, Kaskade, Ferry Corsten, Axwell and David Guetta. Mr. Rivera’s The Juicy Show is aired worldwide on the world’s best radio and online stations reaching 7 million people a week.

Doctor P is the stage name of the English dubstep producer and DJ, Shaun Brockhurst. He’s had an intense love of music since he was just a teenager jamming with his friends on drums and guitar. Doctor P is what you might label as a triple threat as his talent can be found in the roles he effortlessly balances as a musician, producer, and DJ’s He also founded Circus Records with long-time friend Flux Pavilion. Shaun began to professionally create tracks in 2007, predominantly Drum and Bass but was always experimenting across all styles. He was inspired to try his hand at making a few dubstep tunes in the same vein, and created the joyous and body-popping “Gargoyle”, shortly followed by Badman Sound’ (Dub Police) which were quickly picked up by Rusko and other DJs. Doctor P and Flux Pavilion have continued to grow Circus and their own careers. Doctor P has worked with Method Man, Dillon Francis, Adam F and P Money amongst others.

Born and raised in Houston, Mike Jones has always had an eye on the future while laying the foundation to climb the ladder of success. Jones’ first love has always been basketball, but when his hoop dream did not materialize, he realized that he had to make money to become his own man. As most hoods Biggie described, either you’re slinging crack rock or got a wicked jump shot. Mike Jones began to hustle by squandering his money to create Ice Age Entertainment in 2001 to pursue his other love: rapping. Next, Jones began to circulate his music, hitting DJ’s and strip clubs to make sure his music was heard in the streets. He’s been building his empire since.