2017 is finally coming to a close. It’s been a memorable year, filled with good people, good laughs, and most importantly, good music! It only makes sense to end the year in the same fashion. This weekend we’ve got a hot lineup including Posso at SALT on Friday, Z-Trip at Talking Stick on Sunday, and Decadence Arizona on both Saturday and Sunday! 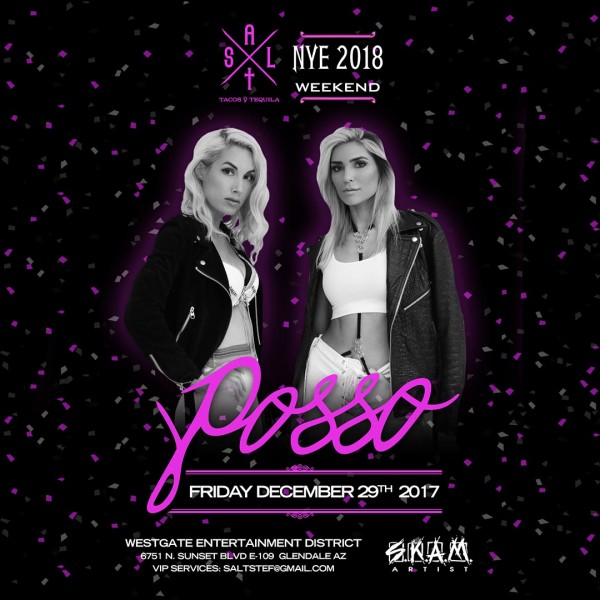 Have you ever heard that song “Last Night A DJ Saved My Life”? Yeah? Then you know Posso, the creative powerhouse of lifelong friends Marylouise Pels and Vanessa Giovacchini. While they only have about 6,000 followers on SoundCloud, they’ve worked with well-established producers such as Amtrac and Party Favor, and have been released on the infamous Armada label. The two have built their fan base through fun, energetic tunes. They’ve performed at clubs and festivals across the globe, with appearances at Ultra Music Festival in Miami, Summer Sonic in Japan, Hard’s Holy Ship, and the Electric Daisy Carnival in Las Vegas. Next place they’re bringing the party? Glendale, AZ! This is the only place to start your New Years weekend. 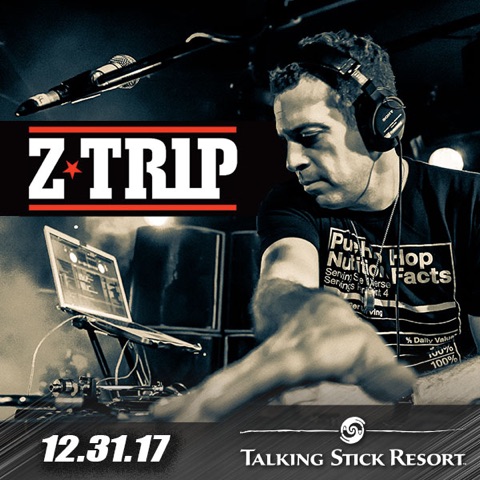 DJ Z-Trip’s sound has a unique place in today’s music scene. As a performer, he is one of the very few able to play traditional festivals like Coachella, Lollapalooza, Bonnaroo, SXSW and Australia’s Big Day Out, as well as the EDM circuit. His Electric Daisy Carnival and Electric Zoo sets were both festival highlights. Z-Trip closed out the 2013 Grammy Awards alongside LL Cool J, Chuck D, Tom Morello and Travis Barker. He has appeared on Jimmy Fallon, Carson Daly, and Jimmy Kimmel Live, as well as in various documentaries and films.In today’s expanding DJ scene, Z-Trip’s versatility, music, and style continue to be a breath of fresh air that you nee heading into the new year. 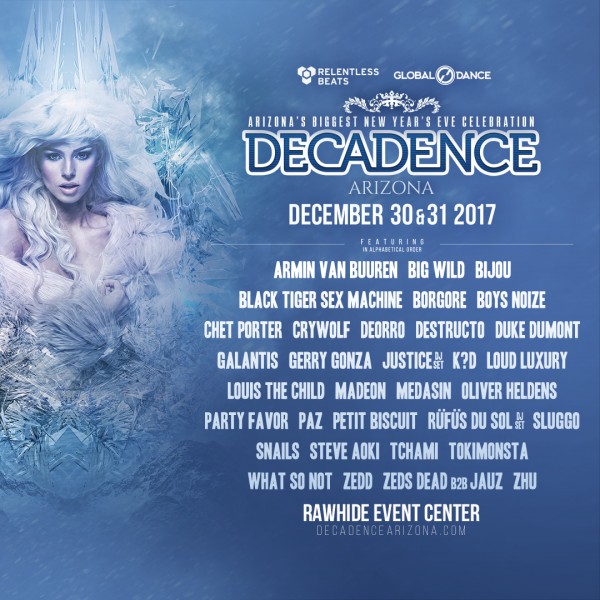 Decadence Arizona will feature 2 massive stages with over 25 national acts as the Valley’s biggest New Year’s Eve celebration. Immerse yourself in the city of Decadence as we count down our final minutes in 2017 and celebrate the new year with life and dancing! New Year’s Eve is the final night to indulge before beginning a journey into a new year: embrace self-indulgence and extravagant excess as we lower our inhibitions to live lavishly and let loose in luxurious fashion one final time in 2017. This years lineup is a sight to see including world-class acts such as Armin van Buuren, Boyz Noize, Deorro, Destructo, Steve Aoki and many more!