A Look at Coachella’s EDM Lineup

Coachella Music Festival and EDM have been linked since the day it started. The fest’s first year featured The Chemical Brothers and Underworld. I didn’t go that year, but I’ve gone almost every year since. Back in 2001, the Sahara Tent was the first music stage you’d see as you entered the grounds, making the thumping bass of house or drum n bass the first and last thing you’d hear. That year I remember chilling in the Sahara relaxing to the chillout sounds of Kruder & Dorfmeister then jetting over to the Insomniac Tent and headbanging to Planet of the Drums, which featured AK1200, Dieselboy, and DJ Dara. Later years featured some of EDMs largest talents before they blew up like Skrillex, Major Lazer, Flosstradamus, Boys Noize, and DeadMau5. Everything single one of them played afternoon or smaller stage sets before they became the main stage headliners they are now. That’s how it was with Coachella–the festival’s promoters had a pulse of what was good in the EDM world and the fest always presented it. 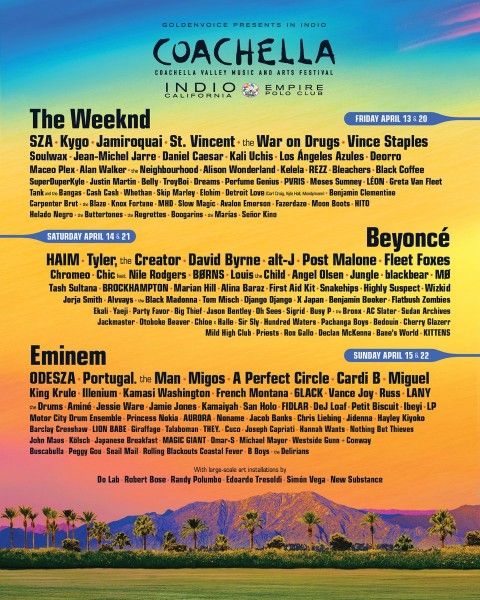 This doesn’t even include the DoLab lineup which will drop shortly before the festival takes place. This year I’m most excited for these five acts:

Maceo Plex has been making deep house since 2011 when he officially adopted his moniker. In 2017, he released Solar which blended techno and house and was inspired by Plex’s love of sci-fi. But it’s the older works of Eric Estornel which I really love. Tracks like “Can’t Leave You” that is driven by a hypnotic drum beat and layered like a cake with soulful melodies, synths, and samples. Simply put, the dance floor will stay moving with Plex on the boards. The only thing that could make this set better is if the Ellum guy shows up!!

When Yaeji burst onto the scene, I couldn’t stop listening. What makes me excited for this set is I couldn’t find enough videos of Yaeji to satisfy my craving for the fun house music she’s making. Plus it’s always exciting to see how artists handle a festival. The club shows she rocked showed she knows how to keep the crowd moving, but a festival crowd who have other options at the same time is a more fickle audience. I think she’ll win the crowd over and I can’t wait to see it happen.

Come on, “Savage” tho!? The track with Flux Pavilion and MAX stayed bumping all of 2017 and garnered the teenage a lot of attention. He has a ton of remixes and released a track with vocalist Ashe called “Can’t Hide” in late 2016 and “Good Nights” featuring Mascolo in 2017. Whethan has worked with Skrillex which has given him a meteoric rise in the EDM-sphere. It’s his upbeat future bass stylings which make me excited to see what he brings to a festival where jovial vibes make for beautiful moments.

I stumbled across Ekali because of this track he did with Denzel Curry and have been hooked since. He started out a bassist for the award-winning band Said the Whale and now the Vancouver, Canada native drops super dope trap and hip-hop mixes and mashups. He mixes track to track so smoothly and skillfully that it’s artistic. This set from Hard Summer 2016 should explain nicely what I mean.

I’ve missed Louis the Child every time they’ve come to Phoenix. Their set from EDC 2017 is mindblowing and so much fun. I go back to it at least once a month when I need a mood change. Other than Flume, what other future bass artists have the track listing Louis the Child does? Their remix of Chance the Rapper’s “All Night “– straight fire! “Last to Leave” – as soon as those keys kick in, automatic smile on my face. And finally, “Weekend” is a freakin’ anthem. These are just a few tracks. I anticipate this set could represent Coachella 2018 for me and despite the high expectations, I know it will come through.

Coachella Music + Arts Festival will once again return to the Empire Polo Club in Indio, for two weekends this spring (April 13-15 and April 20-22). Passes for the upcoming festival have already sold out. If you were able to grab one consider yourself lucky. If you’re still searching, may the odds be in your favor!