Peek-a-boo! The secret is out! Matthew Lucas, proud creator of some of the darkest and spookiest dubstep in EDM, has officially announced that he’ll be joining renowned Canadian artist Rezz for her upcoming album tour this fall. Lucas, known professionally as PEEKABOO, is an American dubstep producer, though he has dabbled and created music in other genres in the past as well. His music has taken inspiration from the likes of Skrillex, Liquid Stranger, and Bassnectar, who have supported his work as well. Bassnectar even collaborated with Peekaboo, featuring the track on one of his own personal albums. In addition, several of Peekaboo’s EPs have been released under Wakaan, Liquid Stranger’s own record label. The ambitious artist took to Twitter to express his excitement about the tour. 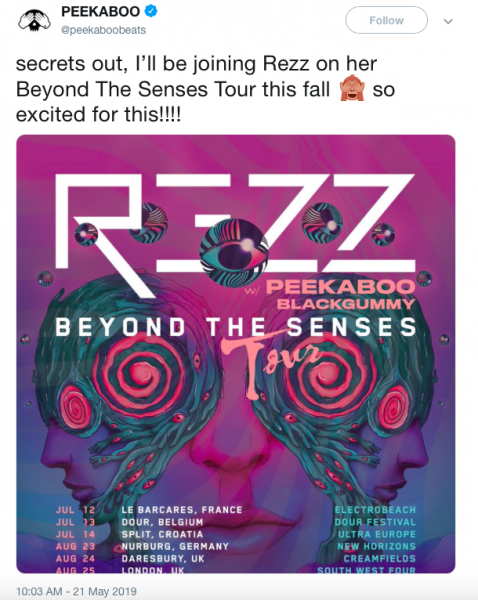 Though perhaps not the same exact genre or musical style, it was hardly a surprise that he would be working alongside an artist like Rezz. Many fans have been calling it a “match made in a heaven” due to the pair’s interest in incorporating darker themes into their music. For Peekaboo, this could possibly be attributed to his time spent in college, where he was reportedly pursuing a career as an audio engineer, specifically for horror films. The haunting elements in his tracks scream horror aesthetics (no pun intended), and his tunes are sure to give listeners a chill down their spine.

Rezz’s upcoming EP, titled Beyond the Senses, is sure to take listeners on a journey through perception, testing the limitations of auditory sensations and creating a chilling sense of wonder and imagination. The release date is set for July 24th of this year, with tour dates beginning a week prior. Whether you’re in need of a good scare, want to travel beyond your senses, or just can’t get enough of Peekaboo, these live haunts through music might just be coming to a city near you.