Arizona’s Premier Desert Party goes bigger and badder than ever!!! Hades presents the 7th annual Dirty Disco on Saturday May 21st! Join us as we transform the Rawhide Rodeo Arena into a dirty dance playground with a state of the art production, bringing you a MASSIVE STAGE, a booming SOUND SYSTEM, A Vibrant LASER Show and Lots of FIRE lighting the desert sky! Tell your friends it’s going down and be there when the hardest hitting line up of the year takes the decks and makes thousands of beautiful people GROOVE to the UNITED sound of electronic music!

Herobust otherwise known as Hayden Kramer, is an electronic producer from Atlanta, Georgia. In the short, three year existence of heRobust, Kramer’s hip-hop inspired bass music has been written about by publications such as Billboard, Rolling Stone, The Huffington Post, Vice, and MTV, while also … Read More

DirtyAudio is a young, rising star in the electronic dance music scene. A Los Angeles native, Dirty Audio discovered EDM at the age of 12, and it was only a matter of time before it became his true passion. In 2011 he began producing and … Read More

Don’t let the name fool ya. These two masterminds from Sweden put their heart and soul into their music, performances and everything that comes with being an Artist, DJ & Producer. The WP project was born in 2008 but Pontuz and Jon first met late 2006. After … Read More 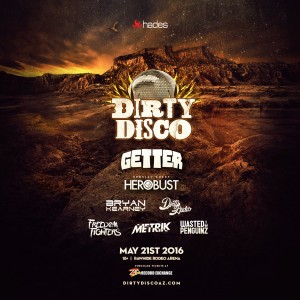