The Chandler Kimball Foundation, which was founded in honor of Valley athlete, Chandler Kimball, raises awareness of Chronic Traumatic Encephalopathy (CTE), a brain disease caused by repeated blows to the head including concussive and subconcussive hits. Chandler started playing tackle football at the age of nine and won a Pop Warner state championship in 2005 with the Scottsdale Apaches. He also helped lead the Gilbert Lonestars to an undefeated regular season and appearance in the 2006 Pop Warner state championship game. He continued to excel in high school football for the Desert Vista Thunder where he started at strong safety and won the 2011 Arizona Football State Championship.

CTE symptoms began to appear in Chandler’s early twenties. Chandler’s family didn’t know at the time he was struggling with CTE as his condition began to rapidly decline. Efforts with therapists and specialists did not produce a definitive cause for his struggles. Chandler succumbed to this preventable disease and took his own life on January 15, 2019. His family had seen drastic changes in the young athlete over two years and wanted answers. They enlisted the help of renowned forensic pathologist and neurologist, Dr. Bennet Omalu, who confirmed that Chandler suffered from Chronic Traumatic Encephalopathy (CTE) which is a progressive degenerative disease of the brain found in people with a history of repetitive brain trauma and concussions.

Jason Kimball, Chandler’s father, founded the Chandler Kimball Foundation to raise awareness of CTE and the inherent risks of youth tackle football. Research has shown that enrolling children in youth tackle football significantly increases the risk they may eventually develop CTE. A study by the Mayo Clinic’s Florida campus found “significant and surprising amount of CTE in males who had participated in amateur contact sports in their youth.”

“We are incredibly grateful to Kaskade for headlining the first annual Life’s Big Win event and for helping us to raise awareness of CTE and the dangers of youth tackle football,” said Kimball. “Chandler was a big Kaskade fan and saw his shows and met him multiple times. Chandler’s love for music and his connection to Kaskade make this a perfect fit for this event and our cause.”

Dr. Omalu also will be at the event to speak about the impact that tackle football has on the brain—especially for young children. In December 2015, Sony Pictures released the major Hollywood film titled “Concussion” on Omalu’s life and work. Will Smith played Dr. Omalu in the film. Additionally, former Arizona Cardinal great, NFL first round draft pick, and 12 year NFL veteran, Eric Hill, will be speaking about youth tackle football and the risks of developing CTE.

Life’s Big Win will be held from 7 p.m. to 2 a.m and, in addition to a headlining set by Kaskade, will include sets from chart-topping reggae band The Expendables and live electronic artist Bardz. Tickets will go on sale to the general public on November 11, 2021 at 11:11 a.m MST. at lifesbigwin.com. A limited number of VIP booths will be available upon request and include a private seating area and bottle service. If interested, please contact vip@lifesbigwin.com. Patrons must be 21 and older to enter the event. All of the event’s net proceeds will go directly to the Chandler Kimball Foundation to help educate and inform parents about CTE, and to provide family members tools and guidance they can utilize to support their decision to find alternative and safer sports for their children. To connect with the organization online, check out: @chandlerkimballfoundationforcteawareness on Facebook and @chandlerkimballfoundation on Instagram. 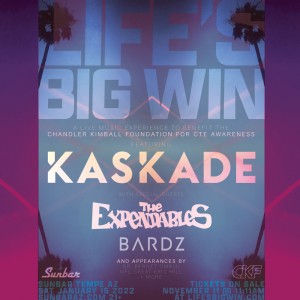