Relentless Beats, The Big Room Group, & Phenomenon Concerts present the Neon Future Experience Tour featuring Steve Aoki and special guests Headhunterz & Caked Up at the Rialto Theatre in Tuscon on Wednesday February 18, 2015.  This is an all ages show.

Heralded electronic music producer and DJ STEVE AOKI is returning to North America for his biggest tour yet this winter with Dim Mak Presents STEVE AOKI’S NEON FUTURE EXPERIENCE tour brought to you by Bud Light. Joining AOKI are support acts Headhunterz and Caked Up, plus many more to be announced. Not since his massive 2012 Deadmeat and 2013 Aokify America major treks has STEVE AOKI criss-crossed the continent on a full production tour.

His NEON FUTURE EXPERIENCE show will support his current album NEON FUTURE I (Dim Mak/Ultra Music), while giving fans a taste of the second installment of the album, NEON FUTURE II, set for release this spring. The follow-up to his debut 2011 album Wonderland, NEON FUTURE I features his Gold certified single “Delirious (Boneless)” with Chris Lake and Tujamo featuring Kid Ink, “Born To Get Wild” featuring will.i.am and “Rage The Night Away” featuring Waka Flocka Flame alongside other tracks with Fall Out Boy, Flux Pavilion, Afrojack and Bonnie McKee.

The NEON FUTURE EXPERIENCE will feature a brand new custom stage set & visuals by V Squared Labs, whose works have been featured on the main stages of Electric Daisy Carnival and Ultra Music Festival. This new NEON FUTURE design combines custom built LED cubes with mirrored panels to create a new visual experience, giving fans the illusion of both depth and clarity never before seen in stage production.
STEVE AOKI is a Grammy-nominated international producer/DJ, electronic dance music entrepreneur, and founder of the trendsetting record label, events/lifestyle company, and apparel line Dim Mak. Since launching in 1996, Dim Mak has broken bands such as Bloc Party, The Bloody Beetroots, Klaxons, and The Gossip through deftly marketed single and full-length releases and now has nearly 500 releases to date. As a solo artist, AOKI has become a force of nature averaging over 250 tour dates per year.
One dollar ($1) of each ticket sold for the STEVE AOKI NEON FUTURE EXPERIENCE shows will go towards the Steve Aoki Charitable Fund. Named the Most Charitable DJ by edm.com, the label owner, DJ, producer and fashion executive has always made it a point to take a proactive stance when it comes to social and humanitarian issues.  Each year a new crisis arises, and there is always a need for humanitarian relief around the world.   Through the Steve Aoki Charitable Fund, he uses his global influence to raise money for relief organizations dealing with these issues through money raised at his own touring events, memorabilia auctions and partnerships with likeminded artists.  For more information, log on to www.steveaokifund.com.

Two-time Grammy-nominated producer/DJ Steve Aoki today stands as one of the most successful American cross-genre artists, solidified via his numerous releases, multiple awards, billions of music and video streams and innovative cross-platform projects. At the core of it all, Aoki is a visionary, a road he’s … Read More

Headhunterz’ career is a performance. Rising from the rapidly expanding hard dance scene, Headhunterz had claimed a top position in the world by reaching an amazing 11th place in the DJ MAG Top 100. This remarkable feat comes after a series of acclaimed main stage performances, … Read More 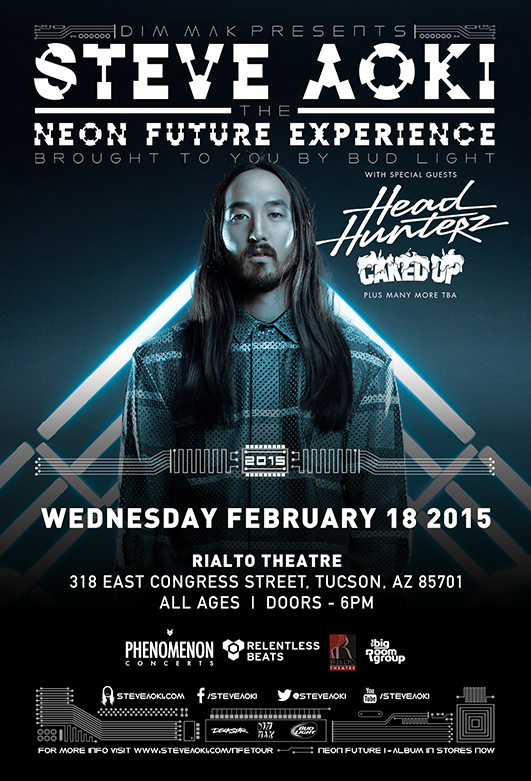