Seeing JAUZ play his genre-defying set on the HARD Summer mainstage this year was quite the experience. Showing his true appreciation for how far he has come within the past year, he stopped the music to share with the audience exactly why playing at HARD Summer is so special to him. Being a huge fan of JAUZ, following him steadily for almost a year now, I could feel his devotion to the music and how grateful he really is to be where he is today as he delivered his inspirational message to the crowd. You can watch the video of it here.

“One fucking year ago today exactly I came to this festival with a GA ticket and was out there in the crowd with you guys, just a normal fucking guy. And literally 1 year ago today, I heard my good friend Tchami play this song for the first time. It was the most amazing experience of my entire life, and my entire life changed. But it’s because of every single one of you right here, right now, that I get to do what I do. Thank you guys so fucking much.” – JAUZ

Staying true to his “no genre” mantra, Sam Vogel played some of his original future house tracks, as well as some electrifying remixes to hip-hop/rap songs. Finally getting to hear his collaboration with Ephwurd (Datsik’s alias) called “Rock The Party” live was truly an incredible experience that made me love the track even more. In addition, JAUZ dropped four brand new tracks for his (^^^) Shark Squad, and definitively, the entire crowd was loving it all. Being one of the top DJs I was most excited to see at HARD Summer 2015, JAUZ definitely earned the recognition from my first ever “DJ to Watch” article I had written months ago, and most certainly did not disappoint!

The #SharkSquad showed up at HARD Summer (^^^) 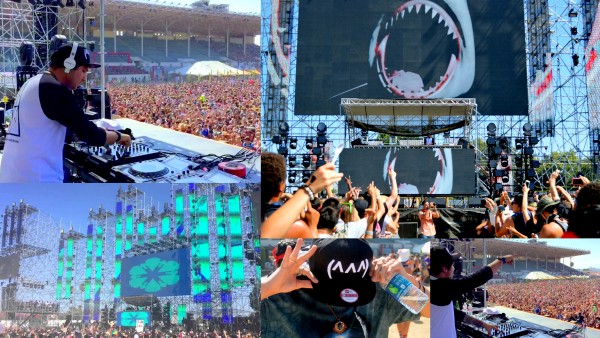