Trailing previous knockouts like ‘Save Me’ and ‘I Know U’, the Toronto trap trio Keys N Krates have just released a new single  from their upcoming EP. Fittingly titled ‘U Already Know’, fans already know the future album is going to be fire just by taking a listen to the new jam.

“U Already Know” builds off all the little things there are to love about Keys N Krates. Chopped up and glitched vocal samples, crisp percussion, and a booming sub-bass to darken the mood. Their signature style continues to develop further as we hear their unique live-powered take on the trap & future bass genres as their sound comes together for a beautiful collection of live instruments, tasteful vocal chops, and electronic energy. Here are a few words posted on their SoundCloud from Keys on the tune.

“We wanted this tune to be loud, fun and catchy. A bit of a smack in the face, but a fun smack in the face from one of your best buds. The vocal sample made us want to juxtapose different styles, so we drew from 90s rave vibes, current bass music and rap.” 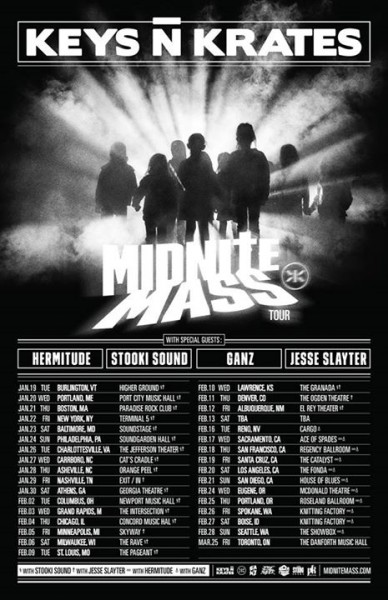 Following the release of their Midnite Mass EP on January 15th, you can find the boys on a massive 33 city tour kicking off Mid January. They will be joined on tour by acts such as Hermitude, Stooki Sound, Ganz and Jesse Slayter. If you haven’t experienced Keys N Krates live, then you really are missing out. Live instruments are never to be taken for granted. Check out ‘U Already Know’ along with the full list of tour dates below and get ready for some new Keys N Krates!