Having amassed almost 100 million streams in the past 12 months alone, production duo, Chad Cisneros and Dave Reed, Tritonal are announcing “Painting With Dreams”, their new full-length album. Out this summer on Enhanced Music, “Painting With Dreams” will feature recent favorites such as “Blackout”, “This Is Love”, and “Getaway”, in addition to a bevy of new material.

To accompany the album, Tritional will be embarking on a headlining North American tour – a foray across the United States and Canada of more than 25 dates. Kicking off this fall, the duo will make stops at noted venues including Stubbs in Austin, Los Angeles’ Shrine Expo, Terminal 5 in New York, Fox Theatre in Oakland, and Echostage in DC, alongside their Las Vegas residency at Marquee. 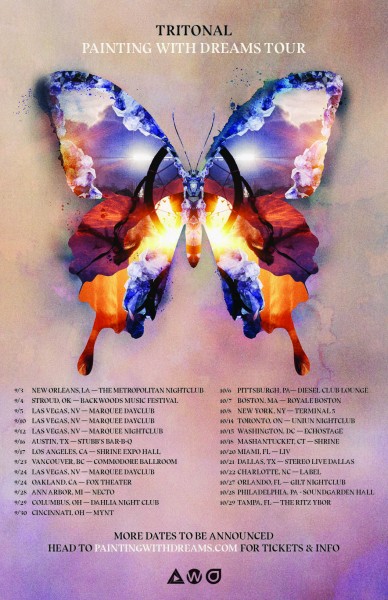 Featuring a plethora of emotions, Tritonal’s new album will surely take you on a journey of feelings as you flow through their uplifting-progressive house style. Starting with a beautifully orchestrated intro, the first 2:30 minutes of the album sets the tone for what the next 40 minutes or so of tracks will say. Right off the back of their new single “Broken” featuring pop star, Queen singer and ex-American Idol contestant, Adam Lambert is featured on their second track right after the intro, a brilliant follow up as his smooth falsetto vocals are a great addition to the already smooth and lush style that Tritonal presents as well.

You’ll have to be sure to listen to the rest of the album and see all the other great singers are featured on the album as well! Don’t forget to give Tritonal a follow on their social media sites below so you can stay up to date with any news they have to share!