Tyler Marenyi, better known as NGHTMRE today, didn’t become NGHTMRE until he was at Icon Collective; however, he started producing back in 2009. Back then he used his nickname “T-mare” as his DJ name. When he was nearing the end of his term at Icon, and had his tracks sounding the way he wanted them, he took that opportunity to re-brand himself and go by the name of NGHTMRE for his DJ career. NGHTMRE (nightmare) was chosen because it is one of the only words with his original nickname ‘Tmare’ in it.

Hot out of business school, instead of putting his finance degree to work Tyler Marenyi had something else in mind for the future rather than following the status quo. Tyler’s vision for his future involved working in a studio rather than dressing up suit and tie working nine to five at the office everyday. After graduating college in North Carolina, he made the move of his lifetime to California where he enrolled at Icon Collective Music Production School in Los Angeles, California. This music production school surpasses the rest with talented alumni like Kayzo, Slander, Jauz, Lumberjvck, Prothype, MAKJ, and NGHTMRE himself as a testament to their process being a success!

Not only is ICON Collective a brilliant school of creatives, but Icon also introduced Tyler to his music family. Slander and NGHTMRE truly became like brothers after. They went on tour together and then continued to bring eachother on for eachothers festival performances, appearing as a special guest and Nocturnal Wonderland with Slander was one of the highlights of NGHTMRE’s life. This year’s 20th anniversary of Electric Daisy Carnival, NGHTMRE brought out Flux Pavilion to premiere their hot collab “Feel Your Love,” as well as his dad at midnight in honor of Father’s Day (adorable), and of course Slander to keep the tradition going. After finishing the program, when Tyler began to release his music he quickly garnered a mass following of fans and hasn’t slowed his roll since!

Instead of using the same sounds that you hear in every other producer’s music, NGHTMRE will record his own sounds and implement those noises from real life into his music, making his tracks truly his own. For example, to get a special trap sound that you may hear in his trap anthem “Street” he banged a metal spoon upon the edge of a pot to produce the sound he was looking for. Hitting the spoon at just the right angle, NGHTMRE was able to produce new sounds that he could record and later implement into his songs as a differentiating sound to set himself apart from others. Now he has a brand new sample instead of buying a bunch of music production sample packs.

NGHTMRE has garnered support from some of his biggest influences in the industry for his song “Street,” including Bassnectar, Jack U, RL Grime, and Flosstradamus. He had started working on the track in February of 2015 and sent it to Snails upon completion. After hearing the track from Snails, Skrillex loved it, asking to get it from him, which he later played in his unforgettable, mind-bending Ultra Music Festival set of 2015. Hearing his song played by dance music icon Skrillex at one of the most notorious music festivals in the world was a surreal experience for NGHTMRE.

All of his latest tracks have been marquee collaborations with some of the best talent in the industry, such as “Click Clack” released via OWSLA with LOUDPVCK, “Frontlines” with Zeds Dead featuring GG Magree on vocals, and the bass monster collab with Flux Pavilion “Feel Your Love” featuring Jamie Lewis. 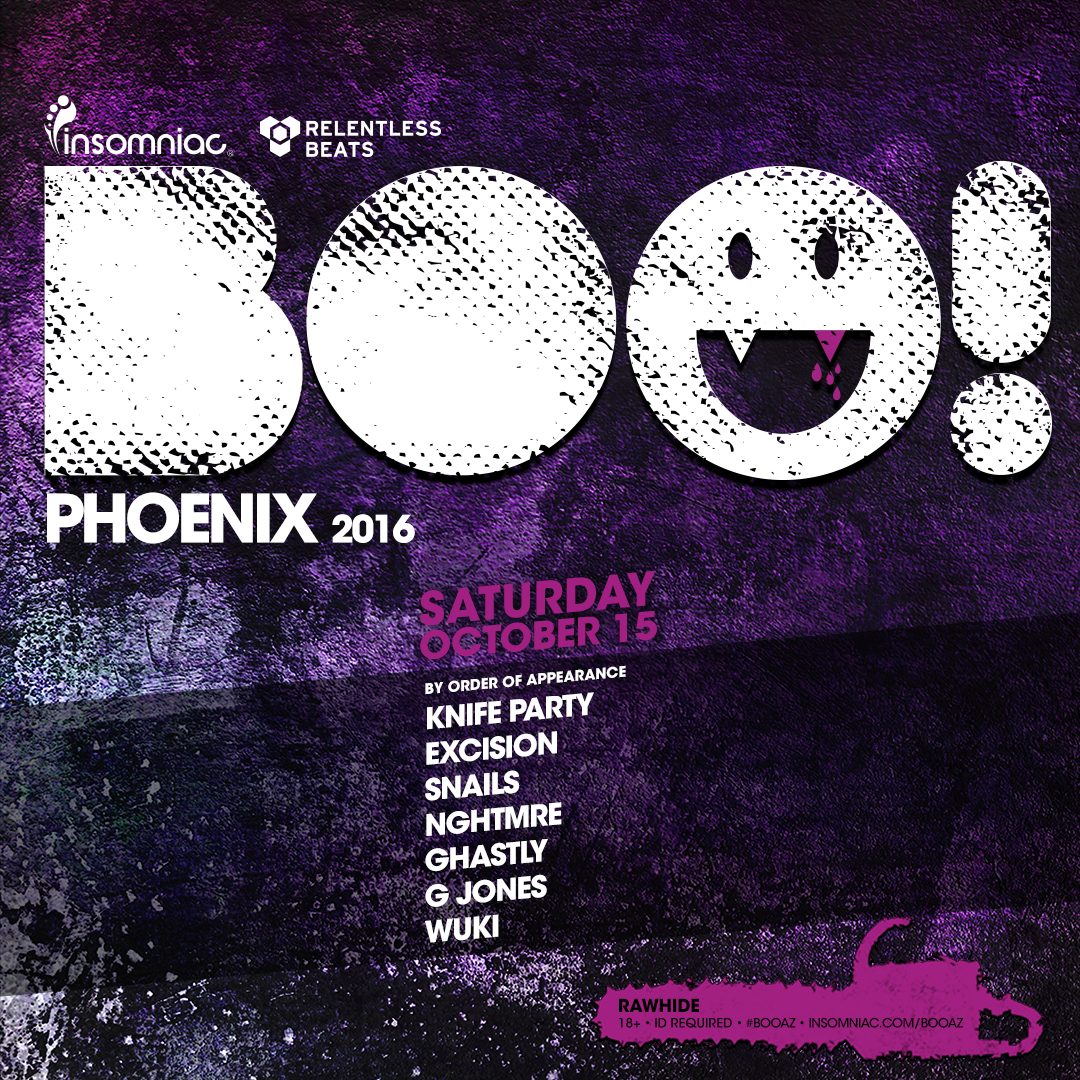 Lucky for us, he will be bringing his genre-bending bass music to woo us at BOO! AZ this October 15th alongside a lineup that was made for bassheads including Wuki, G Jones, Ghastly, Snails, Excision and Knife Party. Pre-sale tickets to see NGHTMRE with all these other talented artists at BOO! AZ went on sale July 27th and are still available here, as well as with your local promoter, and at Zia Record locations around the valley.