We’ve got a plethora of good music coming your way this weekend starting with Layzie Bone of Bone Thugz-N-Harmony at Salt in Glendale on Friday. Saturday Destructo is bringing his Let’s Be Friends Tour to downtown Phoenix with Fisher, Dillon Nathaniel, and Gerry Gonza at Monarch Theatre. We’re spending our Sunday Funday with Jeremy Olander this weekend at Shady Park. 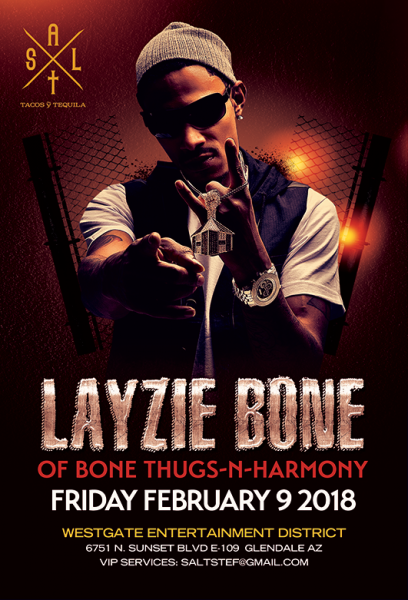 Layzie Bone, born Steven Howse, is a rapper known primarily for being a member of the group Bone Thugs-n-Harmony. He’s been making music since the early 90’s and has worked under a variety of aliases and with numerous groups. Layzie has released music on Eazy E’s Ruthless/Relativity Records label, Stoney Burke, Mo Thugs Nature and more. He released his first solo album, Thug By Nature, in March of 2001 and in 2010 Layzie established a new label, Harmony Howse Entertainment. Most recently Layzie Bone released Thug Brothers in 2015 and Mo Thug boss in 2016. Catch a piece of hip-hop history this weekend at Westgate. 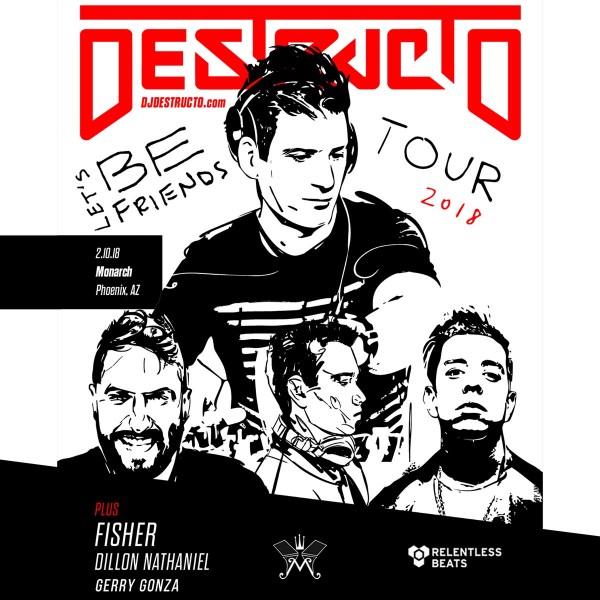 Chances are you’ve already heard of EDM heavyweight Destructo, but just in case, we’ll give you a quick history lesson. In the early 90s, Richards began putting on raves around LA, one of them being the first ever Electric Daisy Carnival. That’s right, along with creator Pasquale Rotella, Destructo helped created EDC, now one of the biggest electronic festivals in the U.S. for the past 20 years. The two entrepreneurs and music lovers eventually split ways, but that wasn’t the end for Gary. Richards is also the Founder and, as of this past year, former CEO of HARD events. He created HARD Fest in 2007 and has since created HARD Summer, Holy Ship!, and other HARD events across the globe from Miami to Australia.

Performing with him on this stop of his Let’s Be Friends Tour will be Fisher, Dillon Nathaniel, and Gerry Gonza. Fisher produced some of the most popular tracks of 2017, most notable, “Ya Kidding,” which got us all moving on the dancefloor up and down like a rollercoaster. Dillon Nathaniel is a young bass technician who seen a quick rise, but his roots run deep. He’s a former audio engineer and gear junkie who found his footing in music at an early age as a vocalist and guitar player. His father hoped to impress upon him a strong emphasis on dance music exposing the budding musician to the likes of Carl Cox and Sasha on road trips from the age of 8. Gerry Gonza is a Phoenix-native who’s been absolutely blowing up as of late. He recently worked with Destructo on “Shots To The Dome” and has been featured on the Malaa’s CONFESSION label multiple times with his deep, bassy tunes. 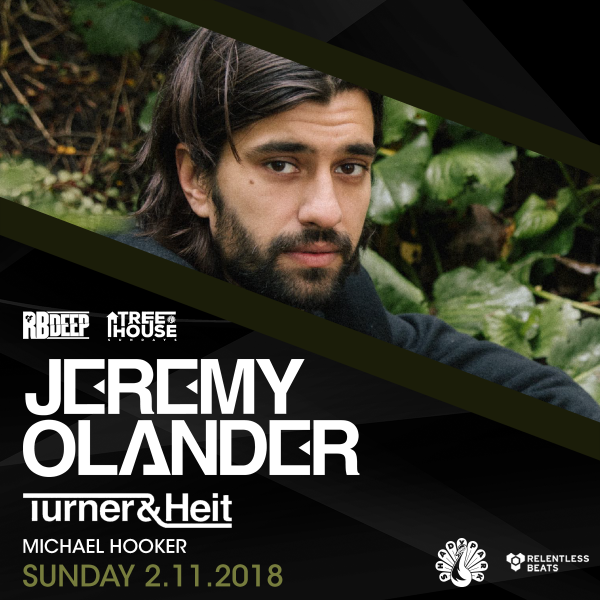 Jeremy Olander has been described as the savior of true progressive style with the way he captivates audiences from festival stages and intimate club environments alike. A jack of many trades, he effortlessly floats between his eponymously released deep and emotionally charged beats, big vocal-infused belters, and drum-oriented techno. You won’t want to miss his performance at Shady Park this Sunday.