BPM Festival: Back In 2013 With An All-Star Lineup

Over a week of shows. 250 artists confirmed. 9 different clubs. All across the Playa Del Carmen, Mexico.

Seven of the upcoming BPM Festival artists were listed in the Rolling Stone’s Top DJs That Rule The Earth, like Carl Cox, Danny Tenaglia, Seth Troxler and Richie Hawtin.

This year’s BPM fest will let attendees party on the beaches all day and party with some of the world’s best DJs at night in Playa del Carmen’s picturesque clubs.

One of BPM’s daytime beach staples is Lee Burridge’s All Day I Dream. A much-anticipated party with a dreamy soundtrack tailor-made for blue skies, sunny smiles, and dancing with sand between your toes. Perennial faves Art Department return stronger than ever for their No. 19 Music showcase as one of the pillars of BPM.

Jamie Jones’ Hot Creations presents Paradise is destined to become a nu-disco favorite. Debut parties with techno legends Carl Cox and Sven Väth brings along his Cocoon Heroes. Richie Hawtin returns with the Minus crew and unleashes the power of today’s technology. Dubfire returns once again with his surefire hit SCI+TEC party, along with Carlo Lio. Cadenza head honcho Luciano brings along his merry band.

DJ Harvey is sure to mesmerize the uninitiated with his ability to thrill with disco classics, obscure beauties and impeccable mixing style. After all that, be sure to maintain your party pacing and save your energy for the The BPM closing party with Danny Tenaglia and special guests for a grand finale finish. 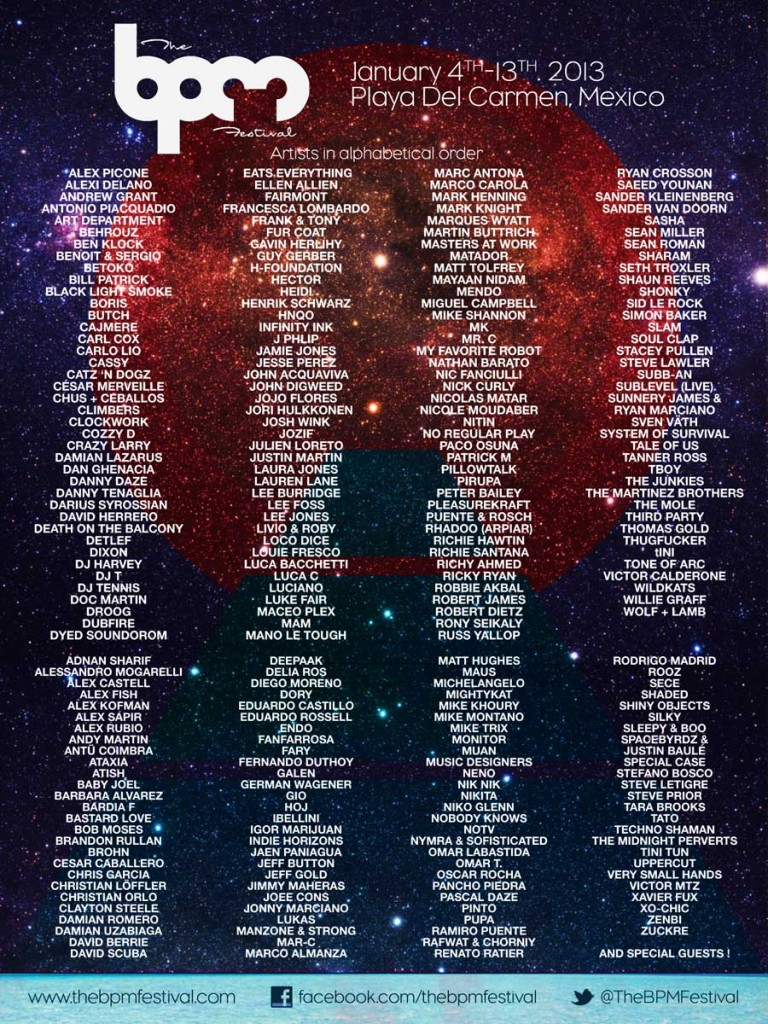 “One New Year’s resolution you should make, however, is to attend BPM Festival, returning on 4th January to the gloriously tropical climes of Mexico’s stunning coastline region, Playa Del Carmen, for its sixth edition… Originally conceived as the industry’s chance to escape the grind of constant travelling and endless late nights, by offering a series of beachside parties in paradise with plenty of downtime, its evolved into a fully-fledged festival bearing possibly the longest line-up of underground dance talent we’ve ever laid eyes on each year. It’s only getting bigger, too.” — DJ Mag