RB Exclusive Interview: No Mana is Coming to Decadence and With Him He’s Bringing “A Shit Ton of IDs!!”

No Mana is a name quickly entering the conscious space of many electronic listeners, club-goers, and festival fanatics. Having performed his first live set back in September, prior to making any sort of appearance anywhere, and signing with both Mau5trap and Armada in the last few months, No Mana should be on the radar of any and all music affectionados. 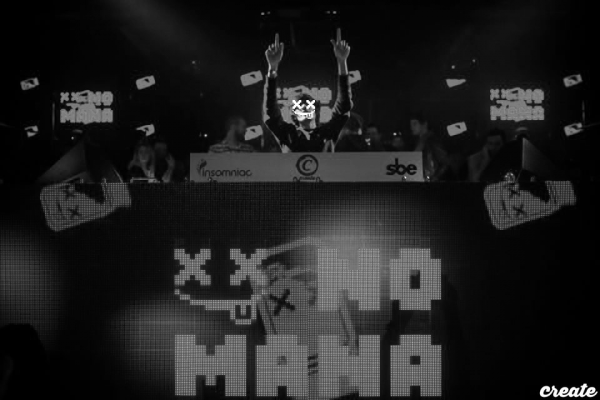 This new talent has made a name for himself through his UP series of releases, with the fifth volume, 5 UP, having been released early last week. This latest two-track release consists of the eclectic “Banhammer” and the 10-minute long odyssey of a track, “What’s Your Wifi”. Along with that, shortly before the release of 5 UP, No Mana released his track “Claws” via Armada, which is reminiscent of early Deadmau5.

This stellar producer has much more up his sleeve for the future including future live performances, a possibility of collaborations, and a ton of new IDs, which he promises to bring with him to Decadence AZ. I had the chance to talk with No Mana leading up to his performance here in Arizona about who he’s most excited to see, working with Mau5trap and Armada, and even his admiration for fellow Decadence headliner, Rezz. Get hyped for No Mana with the interview below!

“Going well, just started the day off with some coffee as usual. Year’s been great, lots of things I dove my head into for the first time – can’t wait for what the following year has for me!”

New Years Eve is fast approaching and we’ve got you here for Decadence. How excited are you to be one of the headliners for this massive New Years Eve lineup with some of the biggest names in the industry?

“Very excited – especially for seeing some of my friends in the line up as well. I’ll also stick around to see a few acts.”

Is there anyone that you are particularly looking forward to catching while at the festival?

“Most likely Above & Beyond. I’ve watched them a few times before as a fan, and a lot of memories were made during their sets with very special people. It’s pretty entertaining to see we’re on the same line up. I’d also like to catch REZZ because we’ve talked for about a year prior to actually meeting in person during Monster Mash in Toronto. Great friend on similar paths and fire music. And Drezo. I love his music and he’s a pretty cool dude.”

So you just had your first live performance back in September. How has it been for you playing out to live audiences the last couple of months?

“It’s been an experience considering that performance in September was like my first time in front of any crowd alone ever. I’m getting used to it, but it just gets more fun from here on.”

What is the biggest thing that you’ve learned about your own music since you began touring?

“I learned how people interpret my music. I’ve always wanted to know what it would be like watching my own set as I’ve watched plenty of others’, so I’ve paid a lot of attention to what people have to say about what I would bring to the decks and how it is any different or the same to an average set. It’s also neat to see which of my tracks work more well than other tracks in a live setting.”

Your music is obviously what got you to where you are now, you’re signed to two of the biggest labels in the industry, Armada and Mau5trap. What was your reaction when you got the news from Deadmau5, and then again from Armin, two of the hugest producers out there?

“When the contract came in, I’d lay in bed and stare at my ceiling and try to fathom the very paper that was coming out of my printer that I was about to sign. It was a big thing of course when I’d think about it in essence. I thought to myself, there were no free summers and endless, reclusive nights spent on me screwing around with a laptop and headphones prior to this, and this is what it has led to. It’s also been a great pleasure meeting them in person at different times, several months later.”

Have you received any valuable advice direct from these massive tastemakers? Has being signed changed your outlook on the industry at all?

“It wasn’t necessarily direct advice, but whenever I talk to someone huge I’m always getting the impression to keep doing what I’m doing. Being signed to a label gave me a good outlook on how they work and how things connect behind the curtains, but not as big of a change as to once I met my manager.”

“Your story is very similar to that of fellow Decadence headliner, Rezz, except instead of Armada Rezz found a home at OWSLA. You said the two of you have met?”

“Yup! She found my music a year before meeting face to face during this year’s Halloween at Toronto’s Monster Mash. Since she messaged me on SoundCloud, we’ve kept up on Facebook and Twitter. I like that you mention her in that way because almost every time we talk now we always talk about how crazy similar our stories are, and how we’ve grown at almost the same exact rate. It’s no surprise to us we’re seeing each other on the same line up, as for future line ups.”

A No Mana/Rezz collaboration would be something else should you two ever work decide to work together.

“That would be dope, I’d love to see what we would come up with. We’ve only gone as far as exchanging production ideas and tips with each other. It’s rare for me to collaborate with anyone, but I’ll be glad to put her on my list of people I’d like to work with in the future.”

Now, you’ve had a few releases on both labels. Your latest on Armada being “Claws” and on Mau5trap being 5 UP which consists of 2 tracks “Banhammer” and “What’s Your Wifi?”. What is difference in sound when you’re producing for each label? Or what is it about “Claws” that appealed to Armada as opposed to Mau5trap and vice versa?

“I’m not exactly sure, as far as I know it’s something they wanted to release, and I’ve always wanted to release on their label as I’ve been a fan of Armin and his label previously, so we just gravitated to work on that. Producing different sounds for different labels isn’t something I really take into account, I just thought it would be a great idea to span out and release under different labels (as pissed off the fans were when they thought I was “leaving” mau5trap). I didn’t want to lean towards, or be too strongly associated with one label as it would be kinda like I’m exclusively owned by someone – it’s too early for that and people are already calling me “another deadmau5″. I want to stand on my own and produce a sound that represents me and what I’m influenced by, and not for a label or anyone else – as much as I love mau5trap and Armada with all my heart, and as much as I am influenced by Joel’s sound, it had to be done soon enough than later.”

“Claws” really reminds me of the Deadmau5 track “Hey Baby”, was there any influence from “Hey Baby” during production? Prior to the Mau5trap signing what influence did Deadmau5 have on your music?

“Lol, well me and my friend saw deadmau5 for the first time in our lives in the crowd at Hard Day of the Dead 2013. She’s gotten into a bit of a Melleefresh vibe shortly afterwards and, at the same time, texted me some lyrics she wrote herself. I thought they were catchy and heard the rhythm in my head as I was reading it, so that’s what I worked with for that track.”

Then with 5 UP you’ve got 2 tracks that feel a lot like adventures through music, spanning many different styles throughout the tracks. What was your goal when producing “Banhammer” and “What’s Your Wifi?”

“Those ones mostly wrote themselves based on what I’ve been listening to at the time. Both tracks were pretty much produced on the spot and wrote whatever came to my head. I think Banhammer was in one of my dreams – I forgot about it for a while until it came back to my head when I was writing it.”

Have you got any ideas cooking for 6 UP that you’re willing to share?

“Not at the moment, but I have so many ID’s in the closet just waiting for me to do things with them. Who knows, one of them will probably end up on one of the UP’s ;)”

With your branding, song titles, and even the sounds that we hear coming from your music, you have a very clear theme of tech. With the pixelated logo, the 1 UP and beyond series of releases, and an old school video game sound to some of your tracks, you’ve got to be into video games, right?

“Haha, well ironically not enough that I would consider myself a “gamer” – and I uninstalled League of Legends because I know that time can be spent in the studio now. But I was a huge fan of Final Fantasy, Kingdom Hearts, World of Warcraft, Starcraft etc. – even though I didn’t play much. I think I’m just influenced by technological things in general. When I produce music, I’ve always gravitated towards synthesized, resampled sounds, and not as much organic sounds such as acoustic instruments. I like the whole theme of it – It’s just me, I guess, and that rubs off on music and my image and just everything I do.”

Do you have any advice you can give to upcoming producers looking to make it big and do what you do?

“Be honest with yourself. Seriously, there are a lot of people who come up to me saying they wanna drop school and their day job to do what I’m doing. Is it really for them? Are their heads in the clouds? Are they honest about their position to do such a thing? But be honest with yourself in general so you can see things the way they actually are. Be grounded, and make good judgments. It’s easy to find sugar coated things in music, whether it’s people coating comments on your music or coating yourself because you’ve signed a record deal. Don’t bask in victory, keep working and improving yourself. Sure you can treat yourself every once in a while, but this whole “path to making it big” is a never ending process, you just gotta keep perpetuating yourself to do cool things.”

Have any surprises up your sleeve for Decadence AZ?

Thank you so much for chatting with me! Can’t wait to see you out here in the desert!!

As for all of you, do not miss No Mana at Decadence AZ! Believe me, you’ll regret missing out on the “next Deadmau5”!!

Stay Connected with No Mana: