To celebrate the biggest New Year’s Eve bash across the entire globe, Arizona has been releasing some pretty big names. People like The Chainsmokers, Deadmau5, Disclosure, Zedd, Jauz, Green Velvet, & more have all been announced, but that was only the beginning and only phase 1 of all the announcements we have.

Today we bring you phase 2 announcements and the big names keep on coming as this New Year’s Eve looks to surpass last years party by tenfold. 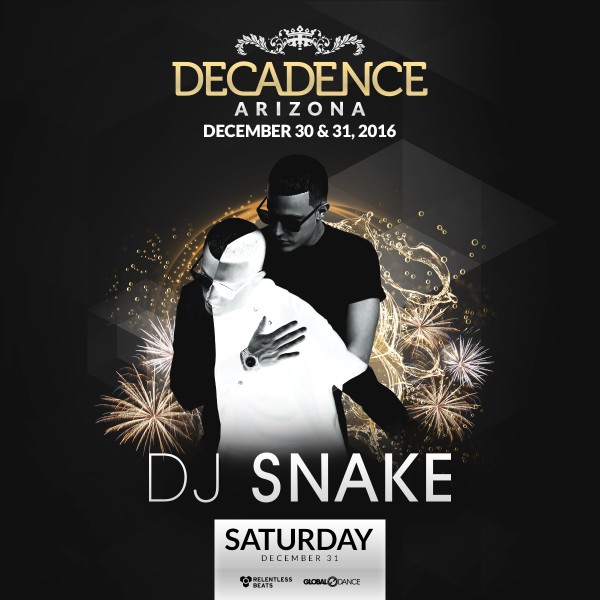 DJ Snake has made a magnificent impact on the community in the time he has been around. Clearly the guy knows something about music because he has released 5 platinum singles in a row. He linked up with Lil Jon in 2013 for the huge banger “Turn Down for What” and then he joined forces with Diplo’s Mad Decent and assisted on the Major Lazer smash “Lean On“. He followed that up with “The Middle” and in short order he’s a big name player in dance music.

DJ Snake’s latest huge geat that he has put out is his new album Encore. With 14 tracks on the whole thing it’s sure to provide a myriad of variations in the music that you will be able to bang your head, hold your girl, and dance the night away to. Not to mention there are a ton of guest appearances on the album such as Travis Scott, Justin Bieber, Skrillex, Yellowclaw, and that’s not even all of them. His combination and mixture of hip-hop and electronic music elements is so uniquely fascinating that it’s no wonder that he draws attention from some of the biggest names like these guys listed above. 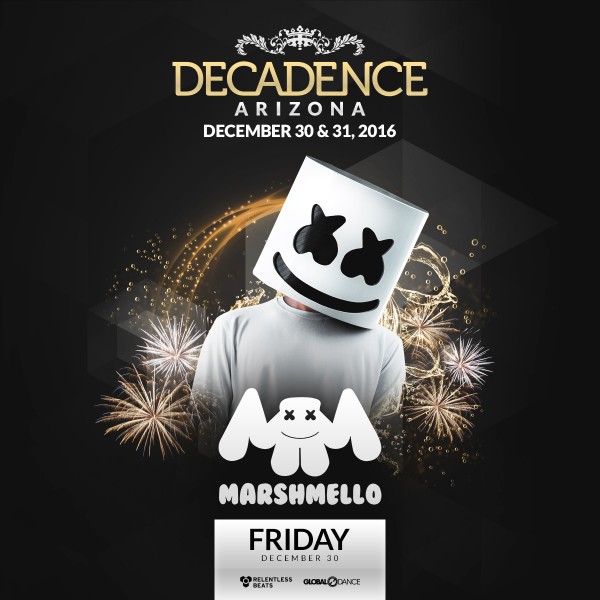 Marshmello may be one of the fastest growing artists out there, in about a year’s time the masked DJ has put out over 20 tracks that have gained millions of views and support from some of the best in the business. Coming through all shows with his squad “Mellogang”, Marshmello is set out to make a difference in the world with his music enticing that the identity behind his mask does not matter, the only ting that matters is having a good time and going out and enjoying yourself.

The latest song that Marshmello put out was his remix of Alan Walker’s “Sing Me To Sleep” to create a beautiful rendition with the filthy melodic trap that Marshmello has taken over the world with. With the original vocals beautifully swaying in the background, Marshmello compliments them by creating a whispery electro lead and that banging sawtooth bass line and big brass that keeps the energy moving in the background. 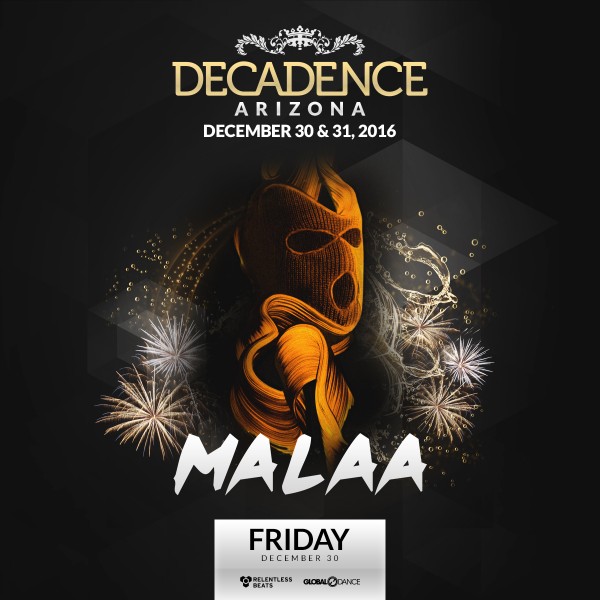 Who is MALAA? Well I can tell you one thing; when you have a breakout single that speaks for itself like “Notorious” your identity is simply irrelevant – there is no need to explain why you’re the fastest up and coming masked DJ. Bringing the deepest and most futuristic sounds you could possibly imagine, Malaa is some real hood house music that will surely have you moving your feet in a matter of seconds and his latest EP Illicit will surely prove to you in a matter of seconds what we mean.

ILLICIT begins with an intro that could be speculated to be MALAA’s mission statement for the EP or possibly the entire masked project. “Illicit Intro” states, “This is Malaa music, you can listen to this shit at the club and go rob a bank afterwards, this is the shit we live for—real house music, this isn’t no game, this is serious, it’s real.” Followed by the intro is tracks “Diamonds”, “Frequency 75”, and “Danger”, which are absolute house bangers and can all be heard above. 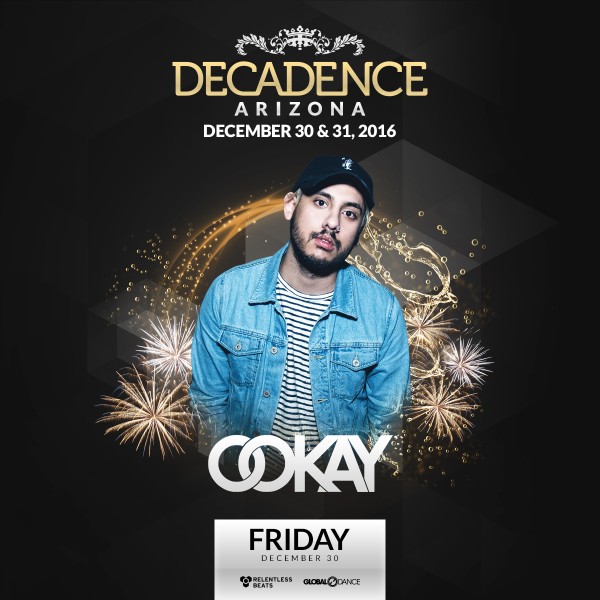 After only 6 months in the scene, Ookay made his way to the top in 2013 and I don’t see him going anywhere anytime soon. His remixes of Congorock’s “Bless Di Nation Ft. Sean Paul” and Steve Aoki, Chris Lake & Tujamo’s “Boneless” charted in the Top 10 in Electronica & Hip-Hop leaving a huge impression and gaining support from artists like Steve Aoki, Diplo, Major Lazer, Borgore, Showtek, Chuckie, Knife Party, Dirtyphonics, Krewella, Adventure Club and many, many more.

His latest track, coming back even harder than he left us, ‘Buck’ takes us on a roller coaster through a tidal wave of electronic synths and harmonious chaos. The heavy bass on top of crushing guitar makes for an intense build-up, leaving us vulnerable for a mad drop. The heaviness fails to cease, as the drop towers every ideal for a hard-style fan. From start to finish, this song goes undoubtedly H.A.M. Ookay takes full control of the banger-meter and skyrockets the adrenaline, providing a full three and a half minutes of “buckness.” 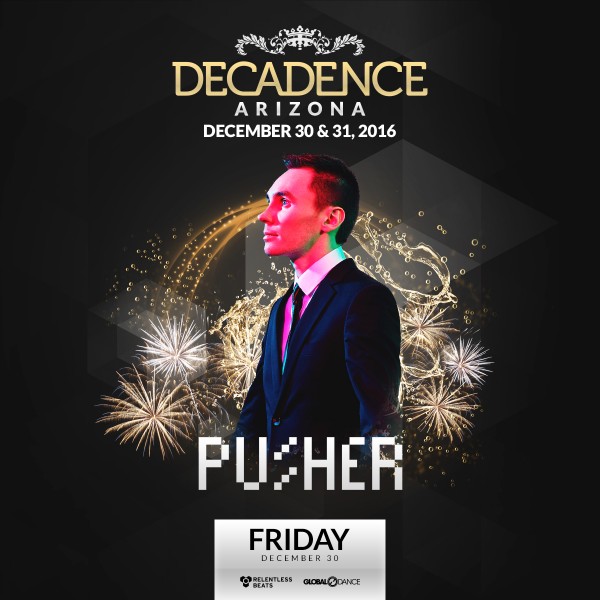 Reigning from Toronto, Canada, Pusher blends styles and sounds spanning much of electronic music and extending back into older styles of Rock, Jazz, Classical, and beyond to connect to the ageless human musical condition. While his tentacles are in nearly all pools and styles of music, together the end product reminds us of something similar to The Chainsmokers, Flume, Illenium, and others among the liking.

Pusher’s newest EP New Laces dropped just about two weeks ago in perfect timing for this announcement and his show at Decadence now. Within the first couple seconds of listening to his music you are taken to an 8-bit world of shiny colorful music. Reminiscent of future bass, trap, and even stealing some sounds from dubstep you are immediately taken through a world of styles in the entire EP. 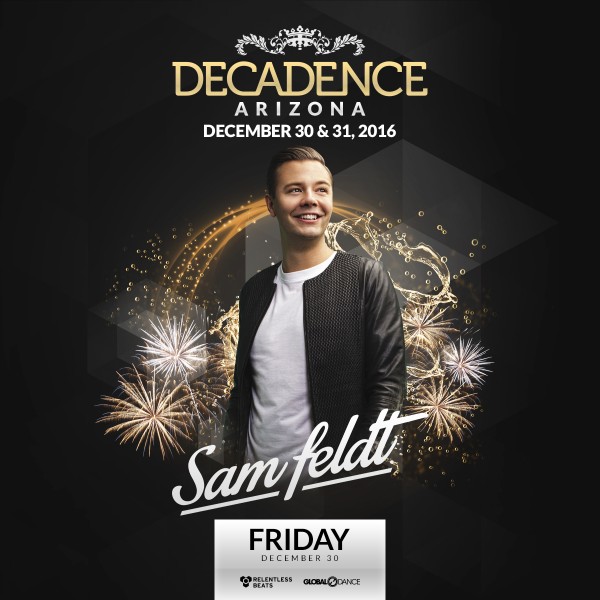 Over the past year, Sam Feldt headlined a 17-date tour through Northern America with performances at TomorrowWorld, Electric Zoo and the legendary Mad Decent Block Party Official After Party. Feldt’s style is all over the place, but in all the right ways. His influences include deep and tropical house vibes as well as catchy vocals. Overall he’s accomplished a very positive, upbeat feel in each track. It’s almost like he made these tracks specifically for your summertime, feel-good playlist.

His latest EP came out about six months ago titled Been A While. Delivering a six-track EP filled with deep house gems, Been A While is already making waves as one of early 2016’s most popular EPs. “Don’t Walk We Fly” featuring Bright Sparks is the most high energy song of the EP with an up-tempo deep house groove and an emotional vocal performance. “All The Kids” with Lulleaux is filled with melodic house and features bongos, piano chords, and the euphoric sounds of violins. “Feels Like Home” with Dante Klein and Milow is so catchy and definitely has the potential to become a vocal house classic. “Been A While” features beautiful horn samples, incredibly catchy vocals, and tropical influences. It’ll definitely have you whistling along while feeling the good vibes. 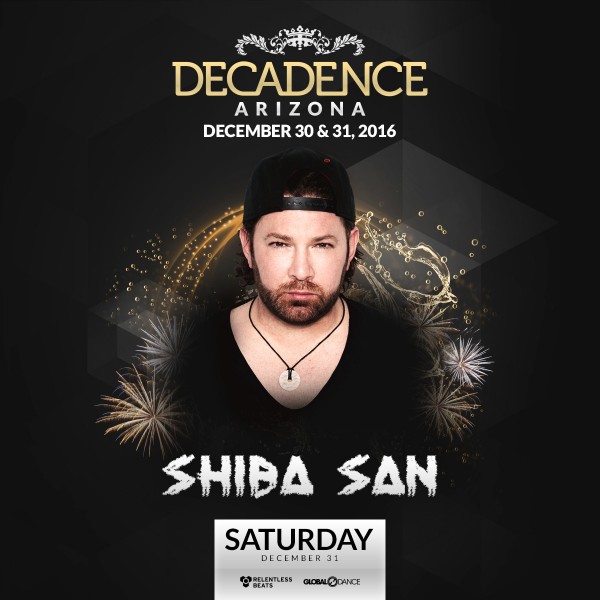 Shiba San, while one of the more low-key and underground DJs, has swept up the EDM scene since 2014 and 2015, going into this year with more than enough riffs in his arsenal to keep the bass pumping and your ear-drums vibrating. In 2014, Shiba dropped “I Like Your Booty,” with that classic 2006 “hand-clap” production element that will bring millennials back a few years and remind them a little of what hip-hop used to mean in the early 00s.

As you can tell, Shiba San is definitely the ambiguous and mysterious French DJ you should start incorporating in your 2016, soon to be 2017, workout (or mental breakdown) playlist (depending on what kind of vibes life has been throwing at you that day). 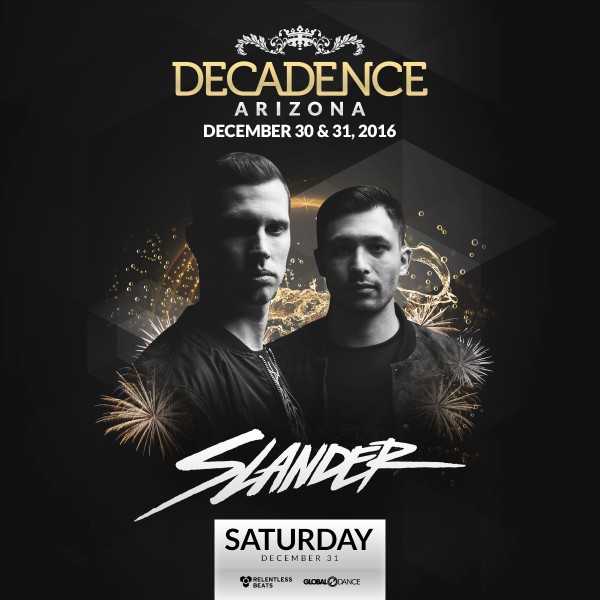 If you haven’t fallen in love with Slander, then you really are about to this New Years Eve. This LA duo has become known for their signature Heaven Trap sound that they have brought to the limelight through various remixes such as Arty’s “Up All Night”, Seven Lions’ “Don’t Leave”, and more recently Alison Wonderland’s “U Don’t Know”. Well now Slander has thrown at us their brand new and first original Heaven Trap track, “Love Again”, which is featured on their Duality EP.

The latest track that they have put out is none other than “Let Me Love You” an original track by DJ Snake featuring Justin Bieber on vocals. Using their signature sound, Slander fills up the entire room with huge synth chords that provide the intensity and emotion, which is a perfect compliment to go with Bieber’s vocals as the float over the top. As the bassline booms underneath the entire track, you’ll be sure to grab the closest girl next to you and starting dancing the night away with her. 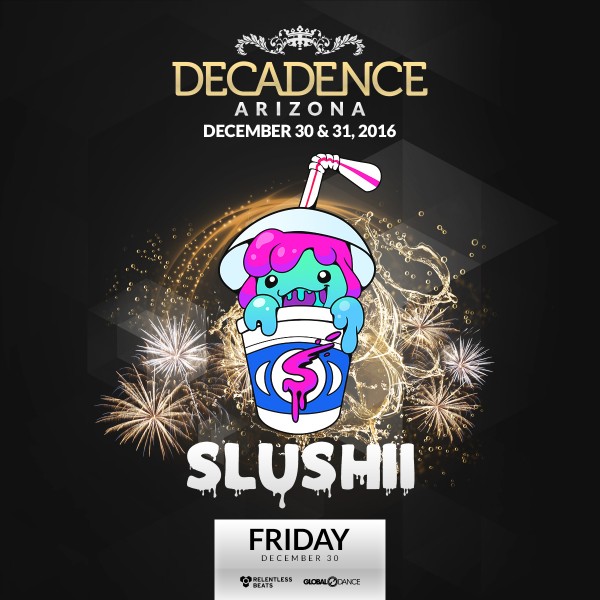 Slushii is making waves all over the world currently. He has been building a lot of attention ever since he started the project and his world debut at Hard Summer Music Fest July 30th & 31st was absolutely astounding. As if Slushii couldn’t have a more sick entrance, he has since been flying all over the world playing his music for all of his fans to listen to alongside many of his now friends including, Marshmello, Jauz, Ghastly, Kayzo, Skrillex, and so many more of the very best we all love.

The Chainsmokers latest release, “Closer” featuring Halsey has been remixed by tons of artists, and now Slushii joins the bandwagon and dominates the rest. The remix starts off with a slow and warm opening led into a piano progression behind Halsey’s vocals, then followed by a fantastic drop with plucky melodies. The entire song is warm and euphoric, I’d say its nothing short of future bass heaven. 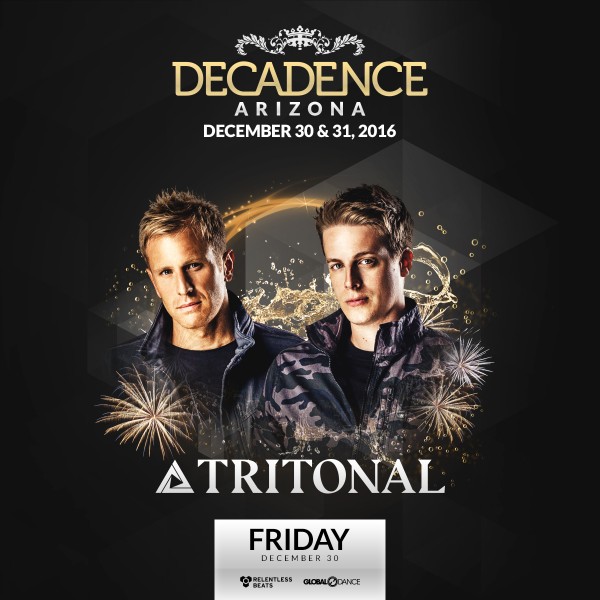 Chad Cisneros and Dave Reed are the brains behind progressive trance duo Tritonal, and believe it or not they formed this dynamic musical partnership from opposite ends of the United States after meeting online in a sound production forum. Not all dj duo’s meet this way, but I sure am glad this one did because these guys have something great going.

Having amassed almost 100 million streams in the past 12 months alone, production duo, Chad Cisneros and Dave Reed, Tritonal are announcing “Painting With Dreams”, their new full-length album. Out this past summer on Enhanced Music, “Painting With Dreams” will feature recent favorites such as “Blackout”, “This Is Love”, and “Getaway”, in addition to a bevy of new material. 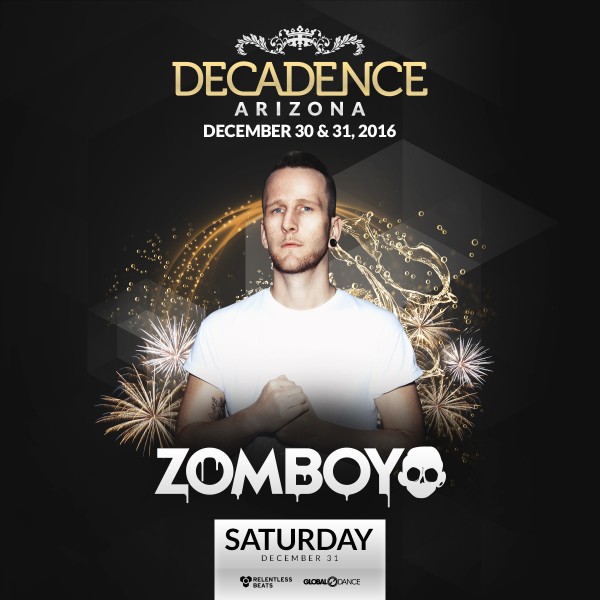 Zomboy came onto the bass scene in a whirlwind in 2011.  His first EP, Game Time was released on fellow bass-slinger Skism‘s label Never Say Die Records and immediately found a home in the top 5 of Beatport’s dubstep chart. Ever since then Zomboy has been a staple for Dubstep and often times is credited with being the founder of “new dubstep” which has a more aggressive and faster beat behind than the half time feel of “old dubstep.”

If you don’t know Zomboy then I wouldn’t be surprised if you know the song above. It’s undoubtedly one of the most played and remixed songs this year with several different versions being played out by artists such as Skrillex, Getter, Ghastly, Skiism, Eptic, and so many more people that love to throw down some filth. Give it a listen yourself and I’m sure as soon as you hear the vocal sample before the drop you’ll be saying “Oh yeah this song!”

Get your tickets to Decadence AZ right here now and prepare yourself for many more artists to come!!