After speaking with Quix about the scene is Australia and New Zealand, I compared his experiences to my time living in Melbourne. Trap and bass isn’t as big of a fad on that side of the planet, so everyone who participates is in deep. Their scene is much smaller compared to what we have going on in the U.S., therefore, it is a bit more difficult to encounter trap and bass shows. Getting noticed as a producer in Quix’s home country of New Zealand is not done conveniently, so strategic measures needed to be taken.

“Branching out locally was the best way to get into the New Zealand trap scene; getting yourself on the up and up so international artists recognize you. I had to get out of my comfort zone to meet new people instead of hoping someone would pick me up.”

Quix’s approach seems to be working as his name can be found on some pretty impressive lineups. As a matter of fact, at the beginning of this year Quix opened for Nghtmre on his headlining tour around Australia and New Zealand. The tour was close to home, yet it was one of Quix’s first experiences on the road with his music. This recent doing allowed him to see how everything works behind the scenes of a tour.

“Just hanging out with Nghtmre made the tour significant. He is a very relaxed dude but he is so energetic on stage. I watched him for six shows, playing the same set each time, and I was still amazed every night. The whole crowd was going nuts.”

Not too long ago, aside from touring and working on music, Quix was working part-time as a groundsman mowing lawns and doing other manual labor. However, recognition of him as a musician has continued to grow, so no more mowing lawns for Quix. Making music is now a full-time position, so he decided to take initiative and head to the United States.

“Coming into the U.S. I am more focused on touring and applying what I learned at the Nghtmre tour to what I am doing now and just going forward with that. I want to do everything that I can. The last couple years have been between me working part time but quitting to focus on music. The plan is to do and grow a lot more. Tour, make and release music, and be able to do more.”

As a total bass head, Quix was the type of DJ I would seek to find playing parties in and around the clubs in Australia. Investigating to find trap and bass music, I found many of the events were reserved to bars and clubs. You can imagine the influence that has on the scene. The experience is more intimate as the crowds are fairly small. Get a taste of where Quix comes from as well as the Oceania scene with his live set in Wellington, New Zealand:

Alternatively, Wobbleland, the trap and bass palooza in San Jose, California, was where I sat down to speak with Quix. He mentioned it was the largest show he has played up to date. This really struck me because he is on the lineup for Insomniac’s Middlelands coming up this May. As a fresh, new act coming all the way from New Zealand I’m not sure he knows what he is in for, being on such a lineup. When I asked him how it felt to be on it his response was pleasant:

“That’s incredible. I was on a golf course when I saw the post and I looked at it, saw all these crazy names, then saw a little “Quix” hidden in there. My agency, APA, they have been insane at getting me shows and to get that lineup … it’s huge.”

Quix will also be doing an after-hours set at Middlelands, so if you’re attending you’ll have to search for his second performance. The late night sets are not exactly listed for your convenience, but such a set by Quix shall be impressive. One can only imagine the tunes he’ll be tossing in his set. His sound is hard to even categorize, for it goes beyond a genre.

“Growing up I liked a lot of heavy metal, heavy music in general. Trying to incorporate that high energy into my songs is how I make my music. Like people throwing down in a mosh pit and how I can incorporate that into a song.”

“My ultimate collab would be working with Mr. Carmack. Even if the song didn’t come out. He’s been inspiring me since I started making music because his songs draw me to think more and of different types of beats.”

Whether or not he’ll get his dream collab is up in the air, but as an up and coming artist Quix has some words for all of the aspiring producers and fans of his out there.

“I just think if you’re humble [and] if you’re wanting to solely make your life about creating good music then it doesn’t matter what anyone else has to say. I just know this is me, this is who I am, and I’m going to do the best that I can do regardless of my status or where I’m at. I’m just going to try to make the best music possible. The benefit of having fans is amazing and that’s what comes along with all of this.” 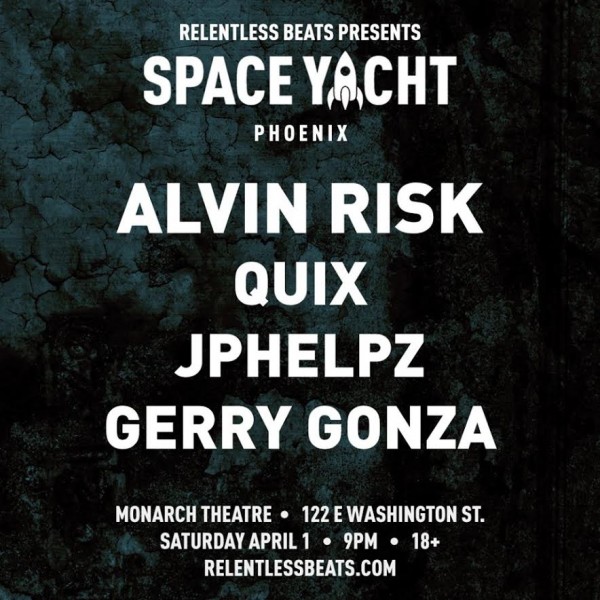 On April 1st, Quix will be joining Alvin Risk, jPhelpz, and Gerry Gonza for Space Yacht Phoenix. Plus he gave us a little insight on what to expect from his set:

“I play a lot of music you may have not heard before, in a good sense. I’m going to play you guys these random, wonky, underground ID tracks that’ll leave you feeling like you need to do your research.”

So if that sounds delightful to you, come check out the array of bass musicians we have lined up for Space Yacht. Quix will certainly bring some intricate noises, with jPhelpz to showcase one of his heavy-hitting compilations. As for Alvin and Gerry, they’ll put you in a dream-like state with their constant, musical flow. There is such diversity on this lineup, but all of these artists have one thing in common, an intriguing approach on bass-oriented electronic music.