There’s a huge weekend ahead with shows from Thursday to Sunday. Kicking the weekend off a day early is Paul van Dyk and Simon Patterson at Dreamstate Albuquerque, followed by Jayceeoh on Friday night. Headhunterz brings the heat on Saturday at Talking Stick Resort, and Dirty Disco will keep you warm all night. Closing it out we have Scotty Boy + Tony Arzadon on Sunday. 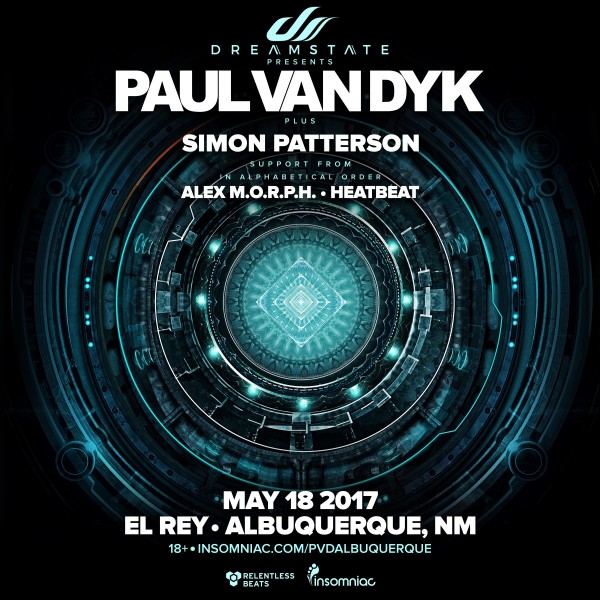 The Dreamstate Presents Paul van Dyk tour has been making its way across the country, and its next stop is Albuquerque, New Mexico! Insomniac is teaming up with Relentless Beats to bring the trace vibes to our NM fam. Paul van Dyk is a Grammy nominated producer, DJ, radio host and among the most respected artists in trance. Something fans respect most is his dedication to the sounds that made him an icon. He has 7 albums, a handful of remix albums and a plethora of singles under his belt. In March he released his first single of 2017, “Touched By Heaven.”

Jayceeoh is bringing his master mixing skills to downtown Phoenix on Friday night. He’s a DJ, producer and world renowned turntablist. He is the founder of label imprint, “Super 7 Records.” Jayceeoh has seen musical support from the likes of A-Trak, Diplo, Bassnectar, Borgore, The Bloody Beetroots and many more, which ultimately propelled him into becoming one of the fastest rising producer talents in the United States. In 2013 Jayceeoh was crowned champion of VH1′s “Master of the Mix” TV show, in which he won a Quarter of a Million dollars and a 1 Year contract as the official DJ to Smirnoff Vodka. His debut original release titled “DAMN,” released on Fools Gold Records later that year. Head down to Gypsy Bar this weekend and find out for yourself.

Willem Rebergen, better known by his stage name Headhunterz, is a Dutch DJ and producer. His roots are in hardstyle and he’s played some of the best hardstyle events in the world including Qlimax, Defqon.1, Q-Base, inQontrol, Decibel and Hard Bass. After almost a decade perfecting the hard styles, Headhuntez has started experimenting with his sound and musical freedom. While hardstyle is still a staple in many of his sets, he knows how to bring the poolside vibes, too. One thing is certain, a Headhunterz set guarantees a high energy, good time. 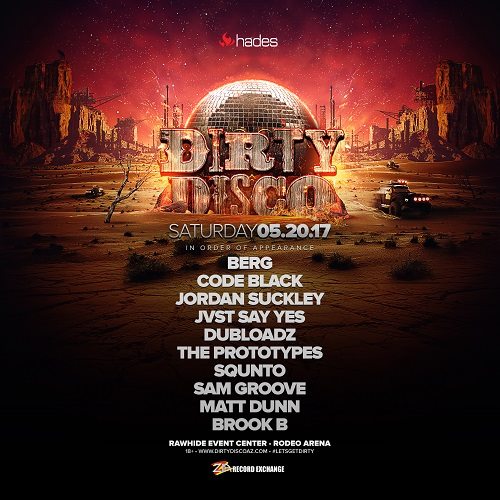 Hades Entertainment presents Dirty Disco 2017 on Saturday at Rawhide Event Center in Chandler. This show is an 18+ event featuring some of the best in underground, bass and so much more. What started as a party in the middle of the desert has turned into a well-recognized mega-bash. Dirty Disco now hosts international artists and top-notch production, growing every single year. This year you can catch Berg, Code Black, Jordan Suckley, JVST SAY YES, Dubloadz, SQUNTO, The Prototypes, Sam Groove, Matt Dunn and Brook B. This lineup is huge and you won’t want to miss it. Between the killer tunes and unbelievable vibe, this will be one for the books.