Summer is right around the corner, but first, Memorial Day weekend!   It’s time for barbecues, brews and killer beats. Relentless Beats has a jam-packed schedule of shows to make this the best Memorial Day weekend yet. Starting it off with a Block Party in Albuquerque we have Steve Aoki, Slushii, Ookay and k?d. Here in the valley Kill Paris, Electric Mantis and Green Lantern are providing the Friday night tunes. Steve Aoki is making his way to the valley on Saturday, as well as Bear Grillz, Terravita, Nebbra and Gabriel & Dresden. Sunday Funday will be hosted by Afrojack and being that it’s a holiday weekend we have Saint WKND and the Desert Hearts Crew going into the late night. 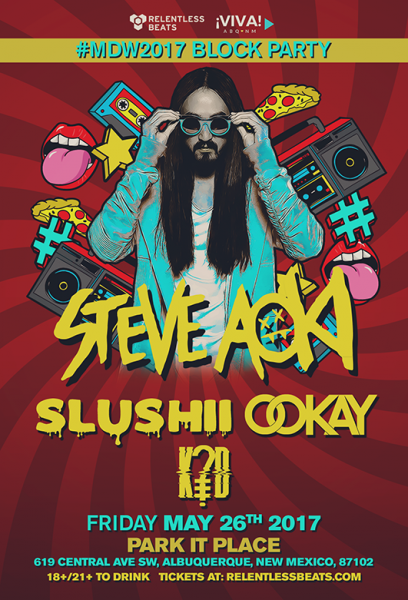 We’re kicking off #MDW17 in a big way for our New Mexico fam. A block party of epic proportions will take over Park It Place in Albuquerque on Friday, May 26. The lineup consists of Steve Aoki, known for his long locks and love of cake, alongside Slushii, Ookay and k?d. Slushii has made way for himself with remixes of Marshmello’s “Alone” and Wiwek and Skrillex’s “Killa.” Ookay is known for his insanely popular tune “Thief” that makes everybody get their air sax out. He’s rising to the top of the Beatport charts as an acclaimed trap producer. Rising star, k?d has caught the attention of Rezz, The Chainsmokers and many more. With just over a year under his belt he’s making it on lineups all over the country. You won’t want to miss this one!

Kill Paris started releasing music in 2013 and his been building his fan base since. Over the past couple months, he’s released a stunning remix of Illenium’s “Only One,” a one of a kind remix of The Chainsmokers’ “Paris,” his irresistible single, “Good Love,” and just recently “where r u.” 2013 was a breakout year for Electric Mantis as well. He was discovered on the internet through his track “Flips and Flops, Drips and Drops.”  His production style is groovy and lighthearted, with dreamy floating synths and a funky aura. Some of Electric Mantis’ most popular work includes remix work for Porter Robinson, Gramatik and Giraffage, as well as his own originals, “Daybreak” and “The One.” 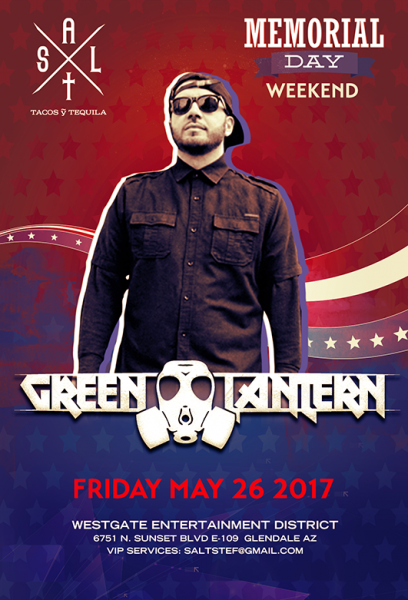 Heading to Salt Tacos & Tequila this weekend is hip-hop DJ, Green Lantern. The New York-bred artist built his reputation in the late 90’s-early 2000’s with his signature brand of mixtapes that were sponsored by Eminem’s label Shady Records. He hosted his own radio show ‘The Invasion’ on Sirus XM’s Hip-Hop Nation and has remixed some of the best in the business like Tupac and NAS.

It wouldn’t be Memorial Day weekend without a pool party, and this will be a big one! Steve Aoki is an international EDM sensation. Aoki is a man of many talents. He’s created his own record label in 1996, He’s released several Billboard-charting studio albums, most notable Wonderland, which was nominated for Grammy Award for Best Dance/Electronica Album in 2013. He’s currently working on his fourth album, Kolony, which should be released late this year. 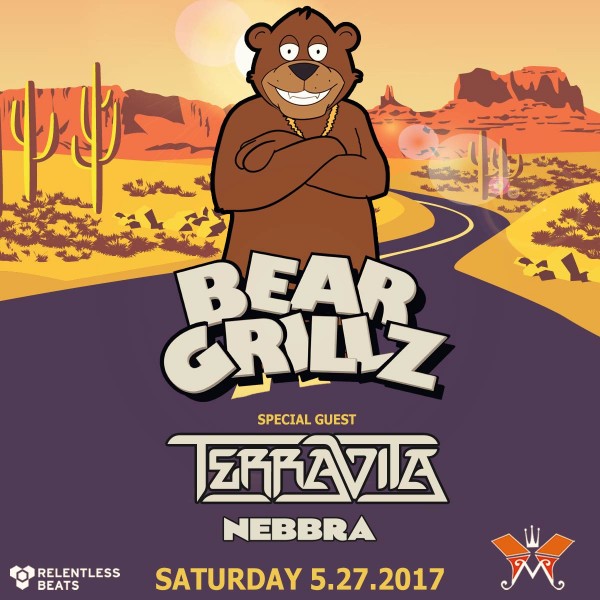 No, he’s not the televised adventurer. Bear Grillz is the real-life dubstep destroyer. Proving that opposable thumbs or a basic grasp of the human language are not necessary prerequisites for EDM domination as he continually puts out some of the best, high-energy dubstep around. He recently released a five-track EP, This Is Your Brain on Dubstep, full of headbanging tunes. Check it our for yourself and see what we mean we say this guy makes the heaviest Dubstep around! Catch Bear Grillz with special guests Terravita and NEBBRA at Monarch Theatre this weekend.

Gabriel & Dresden, composed of Josh Gabriel and Dave Dresden from San Francisco, have been making music together since 2001. They produce a level of energy that makes them unique and special. In 2004 they released their first mix CD, Bloom, after having their seventh #1 Billboard Dance Chart Hit with the Madonna & Britney Spears collaboration “Me Against the Music.” They’ve won the coveted Winter Music Conference IDMA award for “Best American DJ” twice and done remixes and received support from the likes of Above & Beyond, Eric Prydz and Armin Van Buuren just to name a few. Witnessing a Gabriel & Dresden performance is truly an experience. Luckily, you can see what it’s all about this weekend when they invade downtown Phoenix.

Afrojack is a Dutch DJ, producer, and international star. In 2007, he released “In Your Face,” the first recording under the Afrojack name. He’s been featured on tracks with Pitbull, Beyonce, Ne-Yo and Nicki Minaj. In 2014, he released his debut album Forget the World and he regularly ranks in the top 10 of DJ Mag Top 100 DJs. Afrojack and Ravitez teamed up last month to remix Lost Frequencies’ “All Or Nothing” featuring Axel Ehnström. Being the busy man that he is, Afrojack also worked on a new single “Another Life” with David Guetta last month. Afrojack and Ravitez will be providing the Sunday Funday poolside vibes at Talking Stick Resort this weekend. 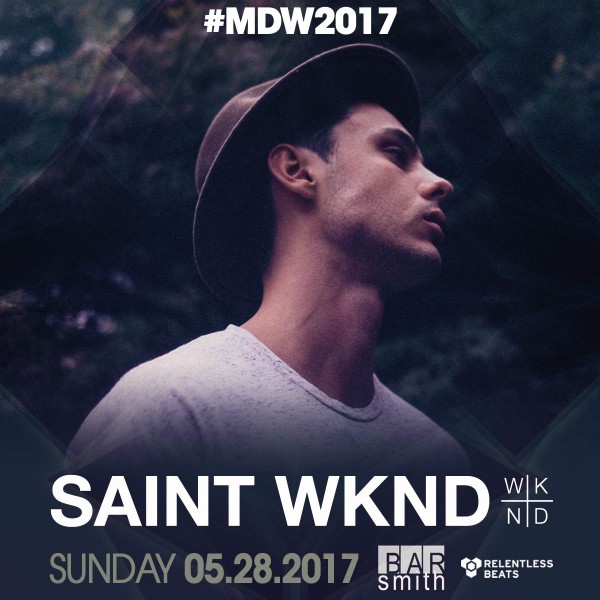 Munich producer, SAINT WKND has been doing big things as of late. He just released his debut EP Golden Youth via Sony Music UK. It’s been a long-time coming for the young house producer, as Golden Youth showed off a more mature side to SAINT WKND’s sound. He has an alt-electronic approach to the future bass sound making him stand-out in a rapidly growing genre. He just wrapped up a tour supporting Louis The Child and now he;s taking over the Bar Smith rooftop. 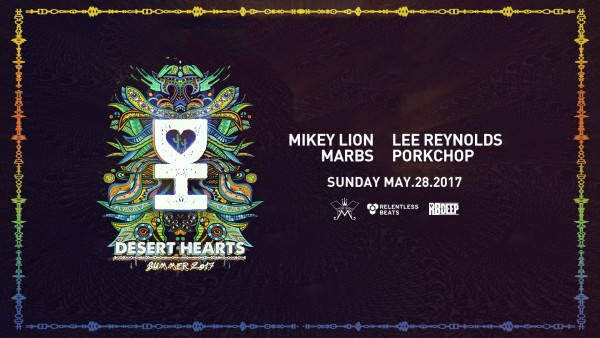 Traveling the country and spreading the love wherever they go is the Desert Hearts crew. Over the past 4 years, the Desert Hearts Family has found itself at the center of a dusty movement, fostering intimate experiences of sonic joy and unbounded love across the globe. Part boutique festival, part record label, and part globetrotting party brigade, this ragtag crew of dreamers has emerged as a vibe-focused force radiating a conscious ethos of House, Techno and Love. We can’t think of a better way to close out this Memorial Day Weekend.