Terravita has been on the rise in the sphere of electronic music. Lately, the boys have been linking up with other versatile musicians including Bear Grillz, Adventure Club, and Riot Ten, to piece together some fresh creations. For real, these guys bring some hefty wubs to the table. Their vigorous tunes keep listeners on their toes.

Right away, the most recent production, War Party EP, starts off as if blood is about to be shed. The initial track then leads into some of the dirtiest dub to demonstrate conflict as sirens continue to ring and nerves become eager.

The second track, “Revolution,” is heavy with guitar riffs. Then all of a sudden come in some mean vocals. However, the lyrics aren’t so greedy. Listen closely as he discusses how to “be the revolution.” Later, “America the beautiful,” is specified as one diversified nation filled with individuals of all depictions. 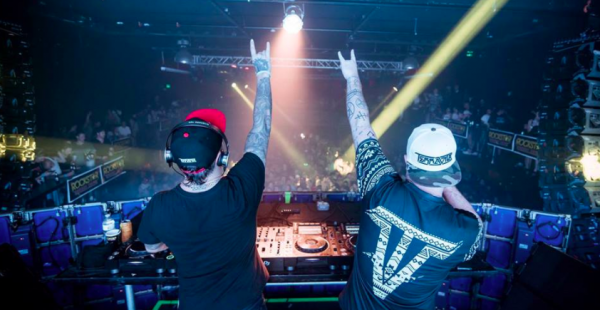 Up next, “Right Now feat. Tima Dee.” The boys take it easy with this one, but their talent seeps in a modish manner. Some heavy elements remain, but the tactics have changed as the piece flows cordially with the vocals.

Without a doubt, the War Party EP takes you on a journey. With the fourth and final track, “The Krok,” the two pick things back up with some hard-hitting strokes of sound. Overall, the EP embraces a time of distress with a dynamic use of electronic tones and vocals, but what kind of message are they trying to portray to Americans? Listen to War Party EP and decide for yourself.