Not all who wander are lost, and this holds especially true for the people who strolled by Goldrush’s main stage last Sunday at around 5 pm. The sun was setting and the Golden Gorge was exploding with color, energy, and the relatable rhythms of Lost Kings.  Everything from their lively stage presence to the evolution of their set from light-hearted and carefree to hard and dirty left the crowd in awe and shaking their head in astonishment; a common reaction to “one of the best sets.”

Just moments after their sunset outro, we sat down with Rob and Nick to congratulate them on a job well done and ask them a few questions about the life of a Lost King. 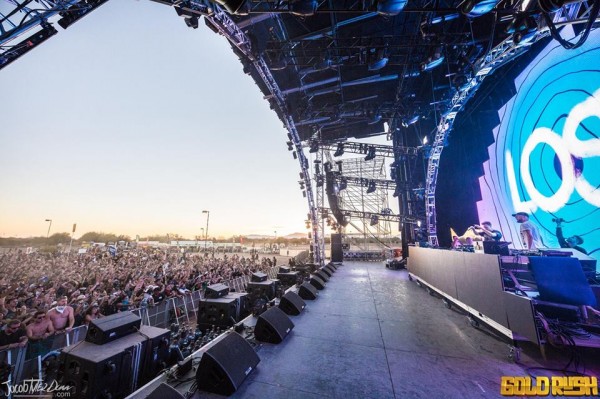 Welcome to AZ! What did you think about your first major festival with RB?

Nick: This one is really up there for us, this is definitely one of my favorite of the year. Everything went perfect and it all came together at the end, we really love it here.

Rob: This one was so sick. The sunset set was unreal and perfect, we couldn’t have asked for a better time. Arizona is a lot of fun, we love playing here.

Let’s talk “First Love.” I really love the music video. What was the creative process like for making it?

Nick: The whole thing was done with really limited recourses and time, we put everything together ourselves and our team. We had to link up with Sabrina (feature on the track) because we knew she was going to debut the song with us at Eclectic Zoo, so we just decided to film around New York. The whole idea of it was to depict the contrast in the song in the video, that was our main creative goal. Visually we left it up to our videographer, we gave him the outline and ideas and he really brought it to life. We wanted people to see our personality and having someone on our team create and get that point across worked out perfectly.  We knew that since people might discover us for the first time from this video, we really wanted to show them who we are, how we party, and really that we just fun dudes that just want play and make music.

You guys have such a variety of vocalists on your tracks. How do you choose the features for your songs?

Nick: it’s really about vibes and energies, that plays a major key in picking who we work with. It means as much to us as the voice. We want people who are down for the cause and about their vocal style. Sometimes it’s a risk to choose to work with someone because you hear a voice but you never really know how it’s going to work out. So far it always worked out great with everyone. With Sabrina and “First Love” we knew she could take it to the next level. She actually reached out to us and it really was just a match made in heaven.

Your music is scary relatable! Are you guys drawing inspiration from friends, society, or your personal lives.. maybe all three?

Rob: It’s really a combination of all three. For the songs that we put out, we make them relatable on all levels. For “First Love” as an example, it doesn’t even have to be about a romantic love interest. You can compare it to anything; an object, a memory, or a thing. And that’s something we always strive to do, we want the lyrics to resonate with people in any way of the matter. Lyrically, we want our music to relate to everyone.

Nick: Relatable as well as interpreted. We want people to feel it in their own way. It doesn’t need to translate to a literal comparison we just want people to take whatever they want from our music.

What do you guys have coming up on the horizon?

Rob: We have new music dropping in the beginning of December which we are really excited about. Our next two songs are actually going to be featureless. For these we really want people to know who we are and these are new tracks are going to do that for us. With that, we are going to still push first love and put out remixes. We’ll also be in Vegas a lot, were at the Wynn which is always really fun. We are going to be doing a lot.