On February 7, 2018, an aircraft will be taking off from Frankfurt Airport, but this isn’t your typical flight, there’s a whole new affair going on inside. BigCityBeats will be hosting a one of a kind party aboard. It’ll be the first music event inside an A310, hosting Steve Aoki, Armin van Buuren, and W&W inside of the World Club Dome’s ‘Zero Gravity,’ and with just that–zero gravity! 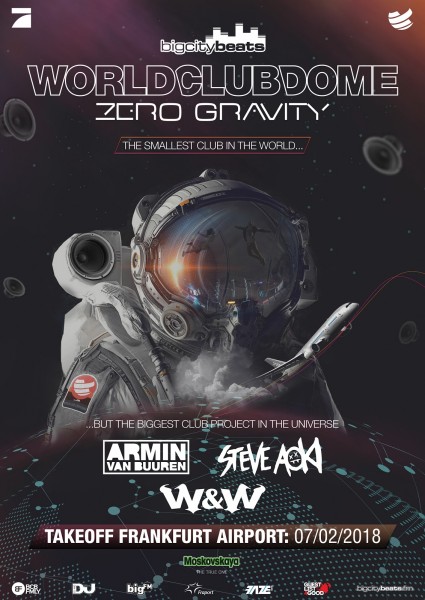 Until now, only qualified astronauts working with the European Space Agency have gone through this out-of-world experience. It’s an adventure like no other, and it’s restricted to a small number of people.

To experience the event, you’ll have to apply for tickets by uploading a twenty-second video to their website on why you would be a good candidate. It is the smallest club in the world, so only sixteen people will be chosen to attend. Only two people from each continent, one male and one female, will take a ride inside Zero Gravity, with two extras from Germany and India.

Once the aircraft takes off, it’ll be in the air for 90 minutes. For the duration of the event, everyone will be floating weightlessly around the venue! Hurry up and apply while applications are still open. Winners will be announced on January 12.