Calling all night owls! Insomniac’s longest running festival, Nocturnal Wonderland, is back for its 23rd year of excitement. Nocturnal is a haven for electronic music lovers, and each year Insomniac manages to outdo themselves with bigger and better lineups, mindblowing stages, and enough neon lights to make the night sky glow. The festival itself is only half of the madness Insomniac has in store. Camping at Nocturnal Wonderland is what really makes this festival one for the books. With multiple camping packages, there are options for ravers on any budget. Insomniac just released the lineup for this masterpiece of a festival and it is STACKED! There are some massive names on the lineup like Flux Pavilion, Eli & Fur, and Bijou just to name a few. The lineup has a perfect fusion of house and bass music. No matter what type of music you prefer, Nocturnal Wonderland has something for everyone. Check out the lineup below! 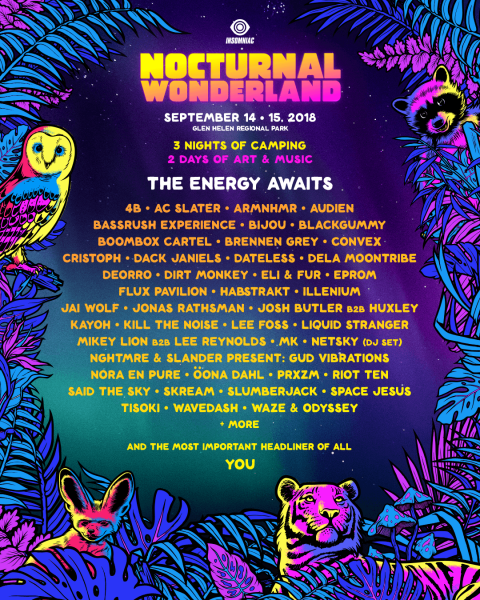 In addition to releasing the first phase of the lineup, Insomniac has graced us with a banging playlist to get listeners ready for Nocturnal.

The playlist highlights the diversity of the Nocturnal Wonderland lineup and is the perfect road-trip soundtrack for the ride over to Glen Helen Regional Park in San Bernardino, California. Join Insomniac for three days of camping and two nights of bumpin’ beats on September 14th and 15th. Tickets are on sale now. Purchase tickets here!